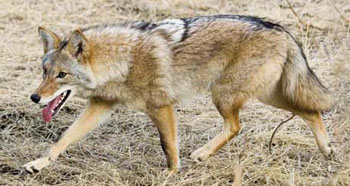 The coyote is opportunistic, eating a variety of foods depending on what is most readily available. Primary foods include fruits and berries, rodents, rabbits, deer, birds, snakes, frogs, and insects. They also scavenge on animal remains, roadkill, garbage, and outdoor pet food.

Called pups. Coyote litters average 4-6 pups, but can be as many as 12 pups. They are fed by both parents and sometimes by related helpers. They emerge from the den at 3 weeks, are weaned at 5 to 7 weeks, and learn to hunt at 8 or 9 weeks. The family unit usually begins to disperse by November or December. In many cases, one pup (usually a female) stays behind to help with the next year’s litter. 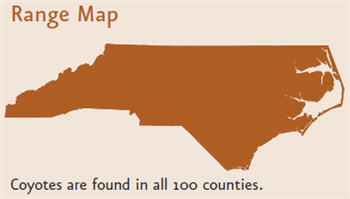 A coyote’s home range varies from 2 to 25 miles, depending on season, habitat and food availability. A coyote’s territory is usually 2 to 3 square miles. Coyotes actively defend their territory through howling, scent marking with urine, body displays, and confrontation.

Coyotes have high dispersal rates and can travel over 100 miles. When a coyote or family group leaves or is removed, new coyotes usually move into the vacant territory. This makes population estimation and control difficult. 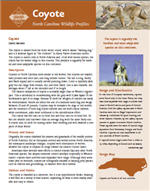 The coyote is named from the Aztec word, coyotl, which means “barking dog,” and is a familiar figure as “the trickster” in many Native American stories. The coyote is native only in North America and has the widest range of all wild canines in this country. It is one of the most adaptable mammal on this continent.

Coyotes in North Carolina resemble red wolves, but coyotes are smaller, have pointed and erect ears, and long slender snouts. Their long, bushy, black-tipped tail is usually carried pointing down. Color is typically dark gray but can range from blonde, red, to black. Coyotes may be mistaken for dogs or red wolves, and the existence of hybrids, though uncommon, makes identification more confusing.

The coyote has five toes on its front feet (including the dew claw that does not appear in tracks) and four toes on its hind feet. Its feet are smaller and narrower than an average dog with the same body size.

Originally, the coyote inhabited the prairies and grasslands of the middle portion of North America. But as Europeans arrived and settled across North America, the subsequent landscape changes, coupled with elimination of wolves, allowed the coyote to expand its range toward the eastern Un ited States.

Americans have devoted more efforts to control coyotes than any other North American species. But despite extensive control attempts (especially in Western states), coyotes have survived and expanded their range. Although they sometimes prey on livestock, coyotes are ecologically valuable in keeping prey species, such as rodents and groundhogs, in balance with their habitat. 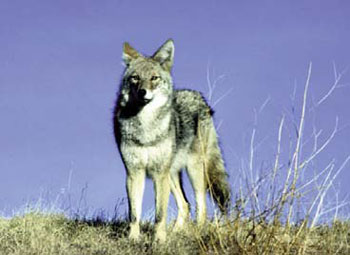 Originally, coyotes inhabited the prairies and grasslands of the Great Plains. But as Europeans settled across North America, the subsequent landscape changes and elimination of wolves allowed coyotes to expand their range eastward. Despite extensive control attempts, coyotes have survived and expanded their range. When populations are reduced, the remaining coyotes respond by breeding at a younger age and producing larger litter sizes with high pup survivorship, making their populations resilient.

Coyotes survive anywhere with food sources. Their habitat can range from agricultural fields to forests, to suburban and urban environments. They are adaptable in behavior and diet. Coyotes are ecologically valuable in keeping prey species, such as rodents and groundhogs, in check.

Coyotes birth their young in dens. Although coyotes usually dig their own den, they sometimes modify another animal’s den or a natural hole, such as under a rocky ledge, to suit their own needs.

Coyotes have played a role in the lives of Americans as far back as this country’s history is recorded. Native American stories often depict coyotes as clever and tricky.

Coyotes get negative attention today because they sometimes prey on livestock and domestic pets. Coyotes are naturally wary of people and will avoid areas in which threats are perceived. However, they may become acclimated to humans in the absence of threats (such as hunting and trapping) and where food sources such as pet food, garbage and unsupervised small pets are available.

Although some people find a coyote’s howl unnerving, this howl serves many purposes. Coyotes howl to locate pack members, distract threats away from their den, or establish their territory. In the late summer, pups practice howling to mimic their parents. Because of the hollow tone of the howl, a pair of coyotes often sounds like a huge group and may seem closer than they actually are. 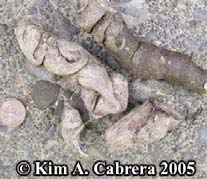 i live in SE Raleigh and our

i live in SE Raleigh and our backyard faces a small pond with a very dense tree and shrub area on the edge of the pond where the stream enters. I have heard short "barks" at night lately so we put out a camera and caught what looked to me like a fox once or twice, along with a returning opossum. I never realized it could be a coyote until now.....but last night my small 7 pound cat did not return from the twilight outside play time we have been giving him. Now I'm scared stiff he could have been eaten. We always supervise our 4 cats' outside time, and I was right there but did not see anything suspicious. Suddenly one cat came scampering in with her tail scruffed out in alarm, and I havent seen our smallest cat in 24 hours.

I live in Hillsborough. My

I live in Hillsborough. My wife won't allow me to smoke in the house so I smoke in the backyard. I often see coyote back there. The coyote here aren't scared at all. I'm smoking in the yard now. I startled one and it ran off in the woods then came right back. I stood there about 15 feet away and just stared at me. I got in my Jeep. lol

I agree, I live close to

I agree, I live close to Downtown Cary and I see them offen walking on the woods and the railroad behind my house. A poor old dog in Preston was killed by coyotes. Don't leave a small dog outside alone, the can jump any fence. Don't leave food for your dogs outside, even if you have a big dog, they fight in packs.

tonight (5/7/17) at 10:45 pm, I returned home (in a semi-rural area SE of Morganton, north of the South Mtns.), and as I parked in the carport, what certainly appeared to be a coyote trotted across in view of my headlights and disappeared into trees. I grew up on the Great Plains, and have seen coyotes all my life. This was light grey with pointed ears, about 2 feet tall at the shoulders with a body about 4 feet long. What confounds me is that the tail appeared to have 2 dark rings! Is this some variant, or could this be some cross with a canine? That confused me!

Thank you for visiting NCpedia and taking time to share this and your question.

My best suggestion is to contact biologists at the North Carolina Wildlife Resources Commission to inquire about the animal you saw.  Here is a link to their website: http://www.ncwildlife.org/Learning/Learning-About-North-Carolinas-Wildli...

I hope this helps.  And please let me know if you have additional questions.

You and your grand children

You and your grand children are safe, but exercise caution with your pets.I would never let my small dogs outside without supervision. To a coyote they look like fat rats or woodchucks and dinner!

I just so a coyote yesterday

I just so a coyote yesterday (1/28/2012) just outside of Mebane. I was watching my small dog in our back yard from a window when the coyote trotted by into the tree line behind our house. It was thrilling to see it but I quickly ran outside and brought in my dog. From what I've read on the internet they are very opportunist but are not a threat to people.

we live just outside of

we live just outside of mebane and have been seeing coyote more and more. I have concerns for my pets and even my grandchildren. Should I be scared?

The NC Wildlife Resources Commission has a PDF online titled "Coexisting with Coyotes" that may answer some of your questions. A link to it may be found at http://www.ncwildlife.org/Nuisance_Wildlife/index.htm.

Their contact information may also be found at the bottom of that page if you have additional questions.