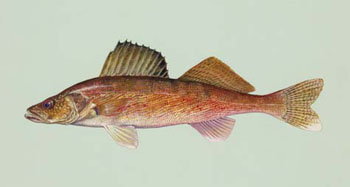 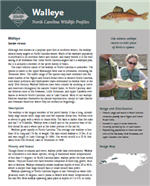 The walleye is a predator throughout its life. Young fish begin feeding on microscopic crustaceans (plankton), shifting to larger invertebrates and fish as they grow. Adults feed primarily on fish.

Anglers often fish with jigs to catch walleye. One technique that works well is to cast the jig parallel to the boat and let it sink. Start a hopping motion using only the wrist, not the arm. Make the jig hop 6 to 12 in. from the bottom while retrieving the jig between hops. Slack the line after each hop. Jigs come in many sizes, colors and styles, although experts prefer a round head, yellow chartreuse jig. Green, white, red and orange jigs work well, too. Other popular baits include minnows, nightcrawlers and minnow-shaped crankbaits.

Walleye populations in North Carolina consist mainly of 2- to 4-year-old fish, with few up to 10-years-old. 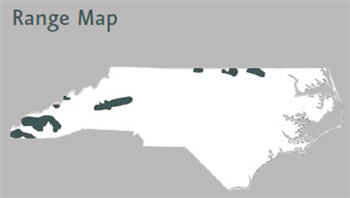 Although best known as a popular sport fish in northern waters, the walleye attracts many anglers in North Carolina waters. Much of the walleye’s popularity is attributed to its excellent flavor and texture, and many believe it is the besttasting of all freshwater fish. Some North Carolina anglers call it a walleyed pike, but it is actually a member of the perch family of fishes.

The exact historic status of the walleye in North Carolina is unknown. The species is native to the upper Mississippi River and its tributaries, including the Tennessee River. The native range of the species may have extended into the lower reaches of the Pigeon and French Broad rivers in western North Carolina, until water pollution and hydropower dams eliminated its habitat there in the early 20th century. Walleye fisheries have been created by stocking in rivers and reservoirs throughout the eastern United States. In North Carolina, walleye fisheries exist in the Hiwassee, Little Tennessee, and upper Catawba river basins in western North Carolina, and in Lake Gaston. Most of our walleye fisheries maintain themselves by natural reproduction, except in Lake Gaston and Hiwassee Reservoir where they are stocked as fingerlings. 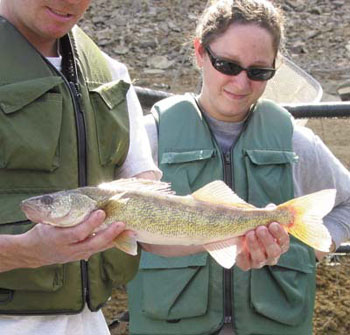 The walleye is the largest member of the perch family. It has a long, slender body, large canine teeth, large eyes and two separate dorsal fins. Normal color is silvery to gray, with a white or cream belly. The back is darker than the sides and has 7 to 9 saddles. Walleye have a black spot at the posterior base of the first dorsal fin and a white spot at the lower portion of the tail fin.

Walleye grow rapidly in North Carolina. The average-size walleye is less than 18 in. long and 1½ lbs. in weight. The state record walleye is 13 lbs., 8 oz. and was caught in Lake Chatuge in 1986. The world record is a 25 lb. fish taken from Old Hickory Lake in Tennessee in 1960.

Though found in streams and rivers, walleye prefer lake environments. Walleye are considered a cool-water species, living in maximum water temperatures of less than 77 degrees. In North Carolina lakes, walleye prefer the least-turbid waters. They are found over hard bottoms composed of hard clay, gravel, boulders or bedrock. Walleye ordinarily inhabit moderate depths of from 20 to 60 ft., which is deeper than large-mouth bass or small-mouth bass prefer.

Walleye spawning in North Carolina begins in late February as water temperatures reach 42 degrees, and it peaks in March with water temperatures in the mid-50s. Most walleye spawning takes place at depths of 2 to 4 ft. in rocky areas of streams; however, some spawning activity occurs along lake shorelines and shoals or the riprap of dams. Like salmon, walleye are known to return to their place of birth to spawn. 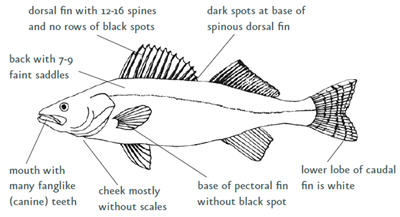 Walleye spawn at night. Males occupy the spawning area first. They remain in deep water during the day and migrate into shallow water after dark. Females ready to spawn move into the spawning area accompanied by several males. The fish vibrate and roll close together as the eggs and sperm are broadcast over the rocks. An 8 to 10 lb. female can lay 250,000 eggs. Hatching time varies from 7 to 26 days, depending on water temperature. Walleye do not dig nests or care for their young.

Following hatching, fry are carried by currents into open water areas of the lake where they begin to feed upon planktonic crustaceans then switch to insects. By mid to late summer they begin to feed almost exclusively on fish and move from open water to shorelines and coves. From the time walleye move inshore they become a schooling fish and remain so throughout the remainder of their life. 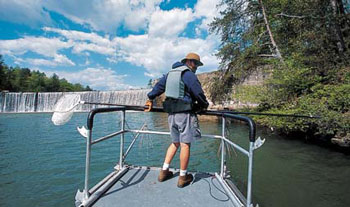 The walleye can be a challenging fish to catch in North Carolina reservoirs, and complaints about catch rates are often heard from frustrated anglers. A common misconception is that walleye numbers in our reservoirs can be increased through stocking. Unfortunately this is rarely the case, because walleye are stocked as small fingerlings that must then grow in the wild for several years to reach harvestable size. Habitat conditions and food availability limit a reservoir’s ability to support adult walleye populations. Stocking is helpful only when walleyereproduction has failed, and most of our walleye populations are reproducing successfully on their own. These self-sustaining walleye fisheries are best managed by protecting habitat and preventing introduction of other fish species that may prey upon young walleye or compete with them for food.

Do not move fish from one reservoir or river to another.
When people introduce a new species of sport fish or bait fish to a reservoir or river, they upset a delicate balance of predators and prey in those systems. Blueback herring are native to our coastal rivers where they are prized as a food fish. However, they are also popular as a bait fish and have been released into many of our inland reservoirs through unauthorized stocking, where they prey upon or compete with young sport fish, particularly walleye. After blueback herring were introduced into Hiwassee Reservoir, walleye reproduction quickly declined to the point where finglering stocking was needed to maintain the fishery.
(See charts below). 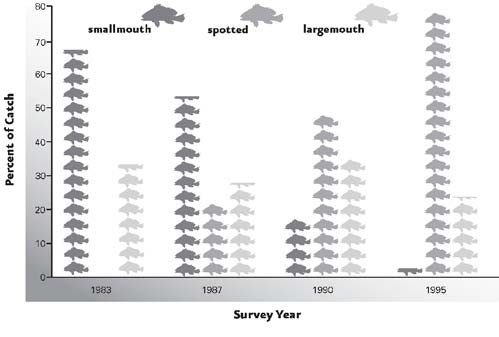 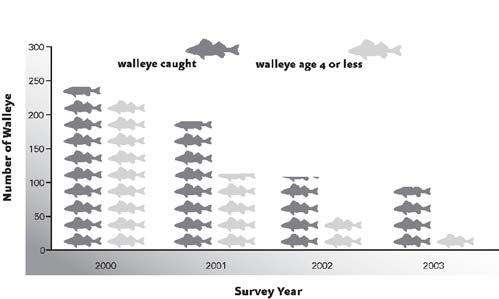 Eschmeyer, P. H. “The life history of the walleye, Stizostedion vitreum (Mitchill), in Michigan,” Bulletin of the Institute for Fisheries Research 3: 1-99, (Michigan Department of Conservation, 1950).