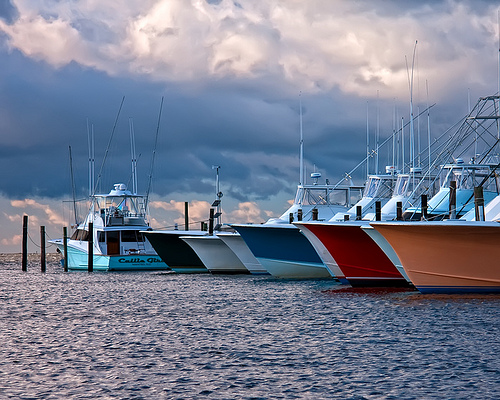 With a primary season stretching from spring through fall and practically no age, gender, or economic barriers to its enjoyment, fishing is one of the most popular outdoor sports in North Carolina. It is estimated that one out of every six citizens in the state either fishes or hunts. Although saltwater fly-fishing is rapidly gaining in popularity, freshwater fishing and deep-sea fishing are the most common types of the sport in the state. Fishing also represents a large part of North Carolina's recreation and tourism economy, with freshwater anglers numbering 1.3 million and spending more than $1 billion each year and saltwater fishermen more than $700 million.

Freshwater fishing takes place throughout North Carolina, as anglers search for particular species in a variety of areas. The eastern part of the state-especially the Roanoke River, which also is home to good-sized populations of large American shad and striped bass-is one of the best locations to find hickory shad in the spring. Cold mountain streams and rivers, such as the Oconaluftee and Nantahala Rivers in Swain and Macon Counties, are the best sources for trout, while largemouth bass may be found in many of the state's rivers, lakes, and ponds. The Neuse River is a particularly good source for hickory shad, blue catfish, American shad, and flathead catfish; Kerr Lake for striped bass; and Falls Lake for largemouth bass and crappie. Many other bodies of water have similar reputations for exceptional fishing of certain species.

Two types of government-designated fishing areas exist in the state, some of which participate in the Fishing Tackle Loaner Program, which lends beginning anglers rods and reels free of charge. Public fishing access areas offer free fishing from cleared banks of many of North Carolina's bodies of water. In some cases these areas are handicapped accessible or provided with amenities such as fish attractors, usually submerged trees and plants that offer habitats to fish. Community Fishing Program locations are primarily situated in parks owned by counties or cities and fished by urban anglers. These sites are intensively managed, being equipped with solarpowered fish feeders and in most locations handicappedaccessible fishing piers. Many are also stocked with good-sized channel catfish from April through September.

Although many North Carolinians fish for relaxation, to spend time with family and friends, or to get away from the busy environment of the state's metropolitan areas, the North Carolina Angler Recognition Program (NCARP) and the State Record Fish Program was established to recognize superior anglers and catches and provide an element of competition to the fishing experience. State records are given to catches with the highest-known weight and length, while the NCARP recognizes fish that do not achieve a state record but are large enough to attain "bragging rights." A "Master Angler" certificate and a complimentary patch are given to anglers who catch six trophy-sized fish of the same species or of six different species. Local ponds-less widely fished and closer to many anglers' homes-actually offer a better chance of landing a trophy-sized catch than the larger venues. Most trophy-sized fish caught in North Carolina are largemouth bass (minimum weight 8 pounds and minimum length 24 inches), with trophy-sized rainbow trout, striped bass, bluegill, and hickory shad following in descending numbers caught. North Carolina is also home to some professional fishing tournaments, such as the CITGO Bassmaster Tour event held at Lake Norman. 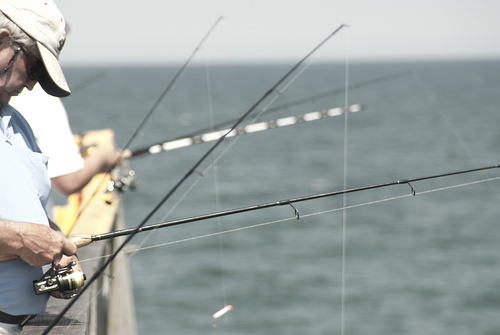 Recreational saltwater fishing has increased in popularity since the early 1900s, when records first indicate that fishing moved from a subsistence activity to a more pleasurable one. Saltwater fishing inshore on sounds and tidal rivers and offshore in the Atlantic Ocean became possible before World War II with the development of suitable small craft. After the war, relatively sophisticated surplus boats became more available in addition to the locally built craft, and improvements came in boat design, engine efficiency, speed, and performance as well as in radio communication, navigational aids, and fish-finding electronics. In the 1960s, oil industry crew vessels were introduced, meeting the need for seaworthy craft with high speeds to reach the farthest offshore fishing areas. Later improvements in equipment included VHF and CB radios, radar, side-scan sonar, and other navigation assistance tools.

Thousands of North Carolinians and out-of-state visitors began thronging to the state's tidal creeks and rivers, sounds, and Atlantic coastline in pursuit of their favorite fish, and a charter boat, or head boat, industry arose to meet the needs of those who did not have the resources to invest in expensive fishing equipment or boats. Many potential fishermen also did not have the boating expertise needed to successfully pilot a small boat in changeable weather through dangerous shallow sounds and treacherous inlets to reach suitable fishing grounds close to shore or offshore on the Continental Shelf, Continental Slope, or in the Gulf Stream. Nor did they have the fishing knowledge and experience required to catch certain species of fish.

Head boat operators traditionally have charged a relatively inexpensive fee per person, or per "head," often carrying dozens of people on half-day and one-day trips. Owner/captains provide a seaworthy and speedy small craft as well as their expert knowledge of local weather, sea, and fishing conditions. Fishing equipment, bait, and ice are also often provided as part of the head fee, along with the mates' time, patience, and expertise in baiting hooks, hauling in fish, and stringing fish for the customers. Charter boat operators have always charged by the trip, usually only carrying a party of up to five or six passengers for several hundred dollars. Like head boat operators, captains of charter boats provide the equipment and services, including a personable mate who not only provides expert fishing advice but also baits the lines, lands fish, changes gear, and prepares the fish for transport by filleting, gutting, icing, and arranging for them to be mounted. Charter boat operators leave early for high-speed sprints to far offshore fishing areas or to the Gulf Stream. They rarely seek bottom-dwelling fish and usually troll for king mackerel, bluefish, dolphin, tuna, blue marlin, white marlin, sailfish, amberjack, and cobia.

North Carolina's geography in relation to the Gulf Stream has affected the home ports of head boats and charter boats as well as the species of fish caught. Charter boats and head boats from ports south of Cape Hatteras have occasionally sought fish in the Gulf Stream, but because of the distance of this ocean current from ports such as Morehead City, Sneads Ferry, Carolina Beach, and Southport, few have gone there on day trips. On the other hand, many charter boats are based at Hatteras, Wanchese, or Oregon Inlet and take advantage of the closeness of the Gulf Stream. The cold Labrador Current and the warm Gulf Stream meet off the North Carolina coast, bringing both northern and semitropical fish and making the ocean waters rich in fish and diverse in species.