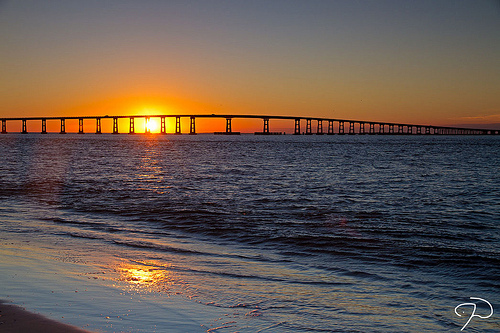 Several dozen inlets have existed along North Carolina's Atlantic coastline since European settlers first arrived in the sixteenth century. A few important inlets have remained nearly permanent travel corridors between North Carolina's coastal towns and the open sea, while others, created in the Outer Banks during hurricanes and other severe storms, stayed open for very short periods of time. Throughout the years, hurricanes have also closed a number of the state's inlets, some of which have been reopened at great public expense.

Ocracoke Inlet, just south of Ocracoke Island, is the only inlet that has been open throughout North Carolina's more than 400 years of recorded history. In 1585 the first colonists sent out by Sir Walter Raleigh entered the inlet en route to Roanoke Island. Early settlers and traders, bound for the ports on the Pamlico and Neuse Rivers, found Ocracoke the only deepwater inlet that connected the Atlantic Ocean with the Pamlico Sound. In the early 1700s, the other Outer Banks inlets-Currituck, Roanoke, and old Hatteras-became progressively less reliable, and by the late eighteenth century all three had closed. This left Ocracoke Inlet as the main port of entry for northeastern North Carolina, including the Albemarle Sound, the Pamlico Sound, and all of their estuaries.

Northern Carolina planters continued to be dependent on Ocracoke Inlet both for shipping products abroad and for importing commodities that were not produced there. With the advent of steam power, Ocracoke Inlet was used also by the new passenger-carrying steamships, especially on the route between New York City and New Bern. In a 12-month period in 1836 and 1837, more than 1,400 vessels passed through Ocracoke Inlet. Meanwhile, Portsmouth continued to grow. In 1840 a post office was established there, and in 1846 the federal government opened a marine hospital to take care of sick seamen. In 1850 the official population of the town was 505.

The decline of Ocracoke Inlet began on 7 Sept. 1846, when a powerful hurricane opened two new inlets through the Outer Banks, Oregon Inlet and a new Hatteras Inlet. Within 15 years, when the Civil War spread to coastal North Carolina, Hatteras Inlet had replaced Ocracoke as the most important inlet along the Outer Banks. In late 1861, after the Confederate forts at Hatteras Inlet had been captured by Union forces, several stone-filled vessels were towed south to Ocracoke Inlet and sunk to block the channel. Ocracoke Inlet never regained its prominence, and Portsmouth, the town dependent on its survival, gradually withered away. Ocracoke Inlet remains navigable by small craft and still appears on North Carolina maps and charts. It is identified primarily as the boundary line between Hyde and Carteret Counties and between the Cape Hatteras National Seashore and the Cape Lookout National Seashore.

Hatteras Inlet, which separates Hatteras from Ocracoke, has remained open continuously since its creation in the hurricane of 1846. (The first Hatteras Inlet, open during the colonial period, is reported to have shoaled up and closed prior to the Revolution after a British warship was stranded in the channel.) Prior to that, Ocracoke was a peninsula attached to Hatteras Island, and a solid line of beach extended from above Cape Hatteras to Ocracoke Inlet. The modern Hatteras Inlet is wide and shallow, and consequently able to accommodate only relatively small vessels, but it is used extensively by a large commercial fishing fleet operating out of Hatteras Village and other Pamlico Sound ports. A fleet of state-run ferry boats also cross the inlet between Hatteras and the north end of Ocracoke Island. The ferries are free, and during the summer tourist season the traffic is so heavy that they depart both sides of the inlet every few minutes.

Oregon Inlet, very changeable and less important to commerce than Hatteras and Ocracoke Inlets, served enough shallow-draft vessels to earn attention from the government. In the 1870s the Army Corps of Engineers, yielding to public demands, made the first of many studies of improvements. Use of Oregon Inlet declined with the share of maritime trade borne by small vessels but began to grow again in the 1930s, when roads and bridges revived tourism in Dare County. Acquisition of land on both sides of the inlet for Cape Hatteras National Seashore in 1953 stopped private-sector development in the vicinity. Growth on Hatteras Island led to the construction of the Herbert Bonner Bridge in 1964. This project caused or coincided with the onset of wild changes in depth and a rapid narrowing of the Oregon Inlet from more than 7,700 feet to less than 2,500. Maintaining the channel has since become difficult, and the inlet has nearly closed from hurricanes and other factors several times. Even before the bridge was built, the instability of Oregon Inlet and the violence of its currents led the North Carolina Wildlife Resources Commission to declare it the most dangerous place in the state for boating.

Beaufort Inlet is a deepwater channel that traverses the Outer Banks west of Cape Lookout, connecting Bogue Sound with the Atlantic Ocean. Originally known as Topsail Inlet or Core Sound Inlet, it has served North Carolina as a port of entry since the early days of settlement. Efforts to maintain the natural depth of Beaufort Inlet (15 to 20 feet), or to increase it by stabilizing the channel and reducing its width, were begun by the Army Corps of Engineers in the 1880s with the construction of jetties at Shackleford Point on the north side and Fort Macon Point on the south side. In modern times, with Beaufort Inlet serving as the entranceway to the State Port at Morehead City, the depth of the main channel is maintained at 30 feet.

Bogue Inlet, the southern limit of the Outer Banks, may have been visited by Europeans as early as 1524 when Giovanni da Verrazano, a Florentine explorer employed by the French, sent a small party ashore near the modern boundary between Carteret and Onslow Counties. The inlet remained largely ignored until the beginning of the eighteenth century, when Queen Anne's War transformed the ongoing rivalry between Spain and England into formal belligerency. During much of the nineteenth century, Bogue Inlet continued to be the site of considerable maritime traffic. Lumber, turpentine, tar, and pickled beef and pork came down the White Oak River and departed through the inlet for other parts of the United States, while fertilizer and manufactured goods arrived through the passage.

After the Civil War, a series of events conspired to reduce Bogue Inlet's significance. Some shippers found that transporting goods through Bogue Sound to Morehead City made more sense than moving them across the open ocean. As if to retaliate for being neglected, the inlet began to fill with silt, eventually providing only about a fathom of water at low tide. Onslow County became connected to Wilmington, a deepwater port, by rail in the 1890s, and the Inland Waterway, as of 1931, provided a vastly superior route than Bogue Inlet did to Swansboro-by then just a quiet fishing village, no longer the busy port it had once been.

Several other inlets have been significant in North Carolina history and have remained important features of the state's coastline. Beginning in the 1720s and throughout the colonial period, New River Inlet, located at the mouth of the New River in Onslow County, served as a significant artery of trade, and in 1758 it was designated as an inspection point for export commodities. Maritime trade through New River Inlet continued during most of the eighteenth and nineteenth centuries, accompanied by sporadic efforts by both the state and federal governments to improve its channels of navigation. This trade declined markedly in the 1890s, however, with the completion of a railroad link between Wilmington and Jacksonville.

Maritime use of New Topsail Inlet, located along the coast of Pender County at the lower end of Topsail Beach, began in the second quarter of the eighteenth century, and for nearly 200 years thereafter the inlet served as a significant artery of coastal trade. In close proximity to ongoing residential and recreational development, the inlet by the late twentieth century was being used primarily by pleasure craft and sport fishing boats. Lockwoods Folly Inlet, situated between Holden Beach and Long Beach in south-central Brunswick County, provides an outlet to the Atlantic Ocean for the Lockwoods Folly River. The inlet was improved by the federal government as early as the 1890s, but its use as an artery of commerce had diminished considerably by the 1930s. Carolina Beach Inlet is a man-made inlet located just north of Carolina Beach. Early plans for an artificial inlet in that area were formulated by 1938 but were not carried into effect for another 14 years. Other North Carolina inlets existing in 2006 were Swash Inlet, Drum Inlet, Bear Inlet, Brown's Inlet, Rich Inlet, Mason Inlet, Masonboro Inlet, Corncake Inlet, and Tubbs Inlet.

Jay Langfelder and others, A Historical Review of Some of North Carolina's Coastal Inlets (1974).

Of the inlets and havens of this country, LearnNC: http://www.learnnc.org/lp/editions/nchist-colonial/1976