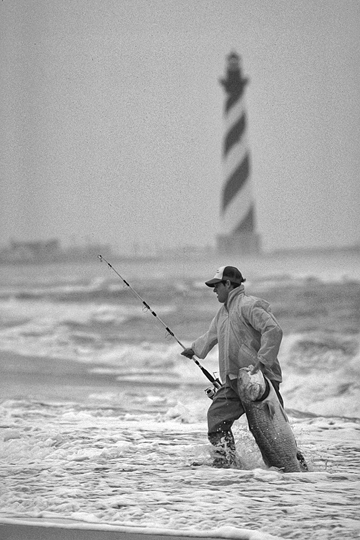 Cape Hatteras National Seashore, embracing the southern portion of Bodie Island and nearly all of Hatteras and Ocracoke Islands to the south, contains some 28,500 acres and more than 70 miles of unbroken ocean frontage on North Carolina's Outer Banks. Authorized as the first national seashore by Congress in 1937, Cape Hatteras National Seashore was established in 1953 and formally dedicated in 1958. Land acquisition for the park was originally through voluntary donation and later through condemnation proceedings. Preservation of the beaches, sand dunes, and other natural features was achieved very largely through the Depression-era work of the Civilian Conservation Corps.

Cape Hatteras has long been known to mariners as the "Graveyard of the Atlantic." Its fame and reputation, however, come not from the cape itself, but from the succession of ever-shifting underwater sandbars, known collectively as Diamond Shoals, that extend seaward to the very edge of the Gulf Stream. They are formed by the violent collision of the warm tropical waters flowing northward in the Gulf Stream with much colder currents coming down the coast from the north, resulting in almost constant turbulence.

There are three different shoals off Cape Hatteras, each with a distinctive name officially designated by the U.S. Board on Geographic Names in a 1949 ruling. The one spreading out from shore is Hatteras Shoal, the middle one is Inner Diamond Shoal, and the easternmost one, touched by the tropical Gulf Stream waters, is Outer Diamond Shoal. Experienced seamen have known for years that there were two navigable channels, Hatteras Slough and Diamond Slough, that bisected the shoals, thus making it possible for vessels to pass through instead of around Diamond Shoals.

Cape Hatteras National Seashore is accessible by automobile via N.C. Route 12, which proceeds south from Nags Head, across the Oregon Inlet Bridge, and through the communities of Rodanthe, Waves, Salvo, Avon, and Buxton to the cape. Long before getting that far, however, visitors are usually able to see the top of the spiraling Cape Hatteras Lighthouse rising near the shoreline. The lighthouse was built in 1870 as the successor to a number of lightships and an earlier, smaller lighthouse, none of which had been effective in warning ships away from Diamond Shoals. The structure towers 208 feet above the sand-the tallest lighthouse in the United States and arguably the most recognizable, with its alternating black and white spirals extending around the tower.

In addition to Cape Hatteras Lighthouse, other man-made attractions within the Cape Hatteras National Seashore are the Bodie Island and Ocracoke Lighthouses, restored lifesaving stations, and the visible remains of numerous shipwrecks. Natural attractions include unspoiled beaches, sand dunes, salt marshes, maritime forests, and a rich diversity of wildlife. Pea Island National Wildlife Refuge, located within the park, has become a favorite destination of bird-watchers. Available activities at the Cape Hatteras National Seashore include surf fishing, boating, sunbathing, swimming, hiking, camping, and nature study. Long popular with sportsmen and -women and vacationers from throughout the nation and the world, the park attracts more than 2 million visitors annually.