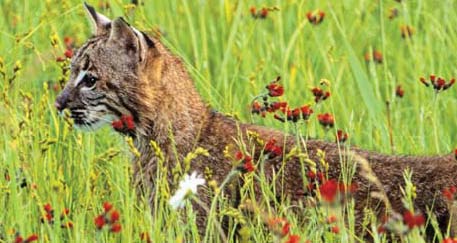 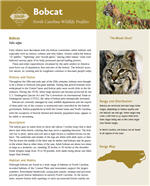 Sexually mature in 1-2 years. Mating usually takes place in late winter or early spring, but bobcats can mate any time during the year.

Called kittens. Gestation period about 62 days. Average litter size is 2-4 kittens. Weight at birth is from 10-12 ounces. Bobcats normally produce one litter a year, but two are possible. Kittens are furred, but blind at birth. Their eyes open in 3-10 days, and by 4 weeks they begin to explore the area around the den. They are weaned by 7-8 weeks of age.

Average 3-4 years for males and 4-5 years for females. Few live longer than 10 years.

Bobcats are territorial and have large home ranges, depending on habitat quality and the bobcat’s sex and age. Home ranges may cover a half mile to 30 square miles with male ranges being two to five times larger than female ranges.

In North Carolina, the bobcat can be found in all regions of the state.

Early settlers were fascinated with the bobcat (sometimes called wildcat) and especially with its elusive, solitary and wily habits. Settlers called the bobcat “ol’ spitfire,” “lightning” and “woods ghost,” among other names. Some even believed various parts of its body possessed special healing powers.

These and other superstitions circulated by the early settlers in America were born out of inspiration, fear and awe of the bobcat. The bobcat’s secretive nature, its cunning and its toughness continue to fascinate people today. 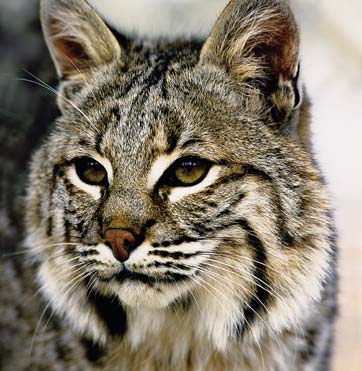 Throughout the 19th and early part of the 20th centuries, bobcats were thought to be a threat to livestock and game animals. During that period bounties were widespread in the United States and bobcat pelts were worth little in the fur industry. During the 1970s, when large spotted cats became protected by the U.S. Endangered Species Act and The Convention on International Trade in Endangered Species (CITES), the value of bobcat pelts dramatically increased.

Bobcats are currently managed by state wildlife departments and the export of their pelts out of the country is monitored and controlled by the federal government. Bobcat populations in both the United States and North Carolina, with the exception of heavily farmed and densely populated areas, appear to be stable to increasing.

The bobcat gets its name from its short tail (about 5 inches long) that is dark above and white below, coloring that may serve a signaling function. The bobcat’s fur is short, dense and soft and is light brown to reddish brown on the back. The underside and insides of the legs are white with dark spots or bars. The fur down the middle of the back may be darker, and bobcats may be grayer in th e winter than at other times of the year. Adult bobcats are about two times as large as a domestic cat, standing 20 inches to 30 inches at the shoulder.
Adult weights range from 10 to 40 pounds, with males being about one third larger than females. 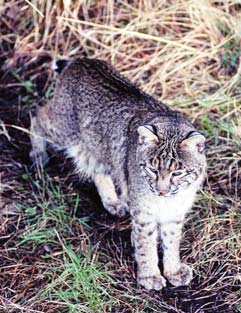 The bobcat is a carnivore that favors early successional prey such as rabbits and mice. Bobcats are excellent runners and climbers and are also very adept at swimming. Their paws have four toes apiece, each with retractable claws that are razor sharp. They also have long, sharp canine teeth adapted for seizing prey. In addition to these hunting tools, the bobcat has excellent vision and hearing and also a very good sense of smell. The thin pupil in the bobcat’s eye expands and becomes large and round in darkness, an advantage for a night hunting species. Tufts of hair that extend beyond the ears may assist the animal in pinpointing the faint sounds of small prey. Bobcats are active year-round and can be active day or night, but tend to exhibit crepuscular (dawn and dusk) activity. Other animals they eat include rabbits, rodents,squirrels, opossums, birds, snakes and deer. Bobcats are solitary except during the breeding season, which usually occurs during February or March. Two to four kittens are born in May.

Bobcats are very adaptable and will use a wide variety of habitats, enabling them to live close to people. However, due to their secretive behaviors, they often go undetected. The bobcat is the only wild cat found in North Carolina. Because the bobcat population is abundant, the North Carolina Wildlife Resources Commission (NCWRC) authorizes a sustainable hunting and trapping season in all regions of the state. Despite declining fur prices, the pelt of a bobcat is still highly valued since the bobcat is a highly valuable natural resource in North Carolina.

Bobcat populations, like other wildlife populations in North Carolina, have rebounded over the past 50 years, thanks to habitat restoration and the implementation of hunting and trapping regulations. Bobcat populations continue to increase and bobcats are now distributed throughout the state. While the bobcat prefers woodlands, it can live in variety of habitats. Its main limitation is the availability of den sites and escape cover, as well as abundance of prey populations. Landowners can maintain or create habitat for bobcats by managing their land for small game populations, such as rabbits and squirrels, and maintaining brush piles, which can serve as escape cover and den sites for bobcats and their young.

Bobcats rarely cause conflicts with people or their activities, though they infrequently kill domestic livestock, such as poultry, sheep or goats, and attack domestic cats. While bobcats may appear in close proximity to development, they are generally wary of people and often run away when detected by people. Their presence alone in a neighborhood is not a cause for concern. In fact, due to their elusive nature, it is a rarity to see a bobcat. If you see a bobcat, consider yourself among the privileged few to see North Carolina’s only wild cat.

Written by Dan Bryant, Colleen Olfenbuttel, Black bear and furbearer biologist–NCWRC, David Sawyer, and Perry Sumner.
Produced by the Division of Conservation Education, Cay Cross–Editor.
Illustrated by J.T. Newman. Photos by Steve Maslowski.
The N.C. Wildlife Resources Commission is an Equal Opportunity Employer, and all wildlife programs are administered for the benefit of all North Carolina citizens without prejudice toward age, sex, race, religion or national origin. Violations of this pledge may be reported to the Equal Employment Officer, N.C. Wildlife Resources Commission, 1751 Varsity Dr.,
Raleigh, N.C. 27606. (919) 707-0101.