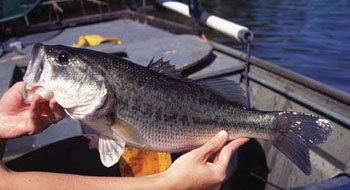 Females live longer than males. In North Carolina, 10 years is long-lived. Most survive only 3 to 4 years. 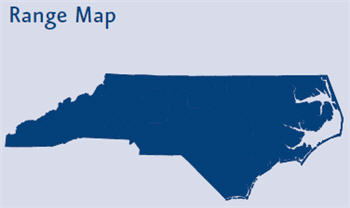 In North Carolina, the largemouth bass is found in ponds, reservoirs, streams and rivers throughout the state, as well as in brackish coastal waters alongside saltwater species. Populations are considered good in every area of North Carolina, with the best populations occurring in the Piedmont and Coastal Plain. Bass tend to grow faster and larger in reservoirs, although large fish are also common in many farm ponds and in some coastal rivers.

Largemouth bass are the most sought-after freshwater gamefish in the United States. There are several reasons for the popularity of this fish. Anglers can usually find waters that contain largemouth bass within a short distance from their homes; they can catch bass that regularly reach trophy size (7 to 15 lbs.); and these fish are exciting to catch, with a battle characterized by head shaking and explosive leaps from the water.

The largemouth bass is a native species of North Carolina. In North America it was originally found from southeastern Canada through the Great Lakes; south down the Mississippi Valley to Mexico and Florida; and up the Atlantic coast as far north as Maryland. As the fish grew in popularity with anglers, it was stocked in other areas and today is found throughout the continental United States and Hawaii, and southeastern Canada. It has also been stocked in Europe, Asia, Africa and South America.

The largemouth bass prefers habitat with lots of structure. This structure may be in the form of weed beds, sunken logs, rocks, brush and standing timber. It uses structure as cover for ambush sites and to hide from larger predators.

When water temperatures approach 60 degrees in the spring, male bass swim to the spawning grounds. Male bass spend several days selecting their nest sites. The beds are usually in 1 to 4 ft. of water, but they may be deeper in clear water.

Spawning begins when the water reaches 63 to 68 degrees and remains in this temperature range for several days. A female largemouth bass lays between 2,000 and 7,000 eggs per pound of body weight.

The male guards the nest, fanning the eggs with his tail to keep off silt and debris. He will attack anything that swims near the nest. Despite the male’s vigilance, many eggs are eaten by other fish species. Hatching time for bass eggs depends on water temperatures. If the water is 72 degrees, eggs will hatch in only 2 days, but they take 5 days to hatch in water around 67 degrees. Approximately 2,000 to 12,000 fry hatch from each nest. Of these, however, only 5 to 10 are likely to survive to reach a size of 10 in. Newly hatched largemouth bass feed on tiny crustaceans and other zooplankton until they reach 2 in. in length. Young largemouth bass eat insects and small fish, including smaller bass. The adult largemouth bass will eat almost anything alive that will fit in their mouths. Fish, worms, frogs, insect larvae, crayfish, salamanders, snakes, small mammals, birds and ducklings are also eaten. Anglers use a variety of natural baits and artificial lures to catch largemouth bass.

Springtime movements center around spawning when bass move from deep to shallow water. During the summer months, bass are active in shallow waters during the morning and afternoons, but may move to deeper water at midday, when the water temperature increases in the shallows. When the water starts to cool in the fall, bass return to the shallows to look for food. As the water temperatures decrease during the winter months, bass become more sluggish, their metabolism slows down, and they require less food. They may become active during winter months if several days of warm weather heat the water temperatures above 50 degrees. 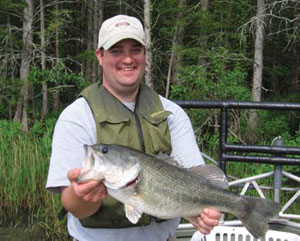 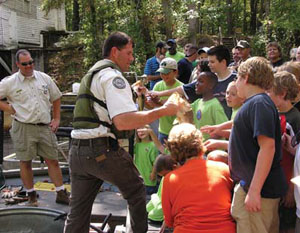 After fish kills associated with Hurricane Isabel occurred in northeast North Carolina in 2003, fisheries biologists began an intensive largemouth bass stocking project to evaluate stocking strategies that may be used after future hurricane-induced fish kills. In 2004, largemouth bass of different sizes (8, 2 and 5 inches, respectively) were cheek-tagged with a minute magnetic tag and stocked in the Roanoke and Chowan Rivers; stocking size was related to the time of year that certain sizes of largemouth bass may normally occur. Stockings were evaluated through an intensive electrofishing recapture period; the recapture period was completed in spring 2007. Although an initial boost of tagged individuals was observed in the population, the number of tagged largemouth bass contributing to the population over time dwindled to a mere fraction of the naturally produced largemouth bass. In this case, natural recruitment was likely a product of a few fish that must have survived to reproduce and repopulate a devastated fish community. Still, this study provided valuable insight on a management strategy to monitor largemouth bass recovery. Plans include implementing a sub-adult stocking strategy, when minimal to no natural recruitment occurs after hurricane-induced fish kills.

Pflieger, William I. The Fishes of Missouri (Missouri Department of Conservation, 1975).