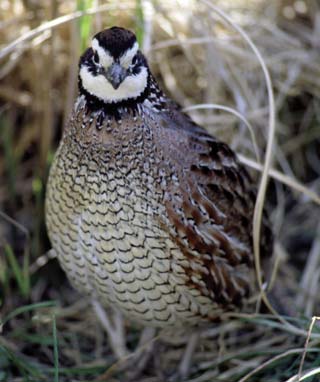 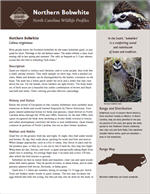 1-3 clutches per year with 12-14 eggs per clutch. Predators destroy about ½ of the nests.

Do not migrate. Live in small flocks called coveys.

Maximum of 5 years; 80% die before they are 12-months old; most deaths due to predation.

Bobwhites occur in eastern North America, from southern Canada to Mexico. In North Carolina, they are most plentiful in the eastern portion of the state and spotty but widespread in the Piedmont (found commonly near clear cuts and farm fields.) But anywhere suitable habitat exists, quail are abundant - even in the mountains. Northern bobwhites are found statewide. 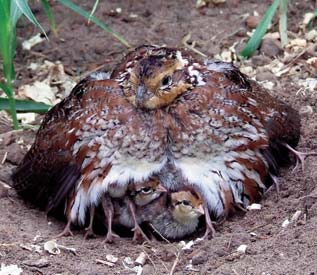 Most people know the Northern bobwhite by the name bobwhite quail, or just quail for short. Partridge is the old fashion name. The males whistle a clear, loud mating call in late spring and summer. The calls, as frequent as 2–3 per minute, sound like the bird is whistling “bob-white.”

Quail are related to turkeys and chickens, and to some people, they look like a small, plump chicken. They walk upright on short legs, with a pushed out chest. Males and females can be distinguished by the feather coloration on the head. The male has a white patch under his neck and a white line that runs above his eye. On the female, those feathers are light brown. The body feathers of both sexes are a beautiful but subtle combination of brown and black and buff and white. Their coloring provides effective camouflage.

Before the arrival of Europeans in this country, bobwhites were probably most numerous in fields and woods burned frequently by Native Americans. Europeans cleared additional forests for fields and pastures. Quail thrived on North Carolina farms through the 1950s and 1960s. However, by the mid 1980s, biologists recognized the birds were declining as former fields reverted to forests, and urban development converted old farms to new subdivisions. Quail remain common in portions of North Carolina, but not at their former numbers.

Quail live on the ground, both day and night. At night, they hide under weeds and bushes. By day, they walk about, pecking for seeds and fruit and insects. When danger approaches, such as a fox or snake, they freeze in place and let the predator pass, or they try to out-run it; but if need be, they leap into flight. Wing beats are fast, furious, and loud—a quail unexpectedly taking flight from under foot is startling. An average flight lasts 5 seconds and covers 150 feet, after which the bird returns to ground.

Bobwhites do best in weedy fields and meadows, clear cuts and open woods dense with native grasses. They do poorly in towns, in dense forests, and in cattle pastures planted with fescue, Bermuda, or bahia grass.

Quail nest 1-3 times per summer, laying on average 12-14 eggs per clutch. Nests are hidden under weeds or grass clumps. The hen may incubate the eggs herself and raise the young, but this job may also be done by the male; in which case, the female is free to find another male for a new nest. Incubation lasts 23 days. Hatchlings weigh ¼ ounce, yet they are able to walk and follow their parent within an hour of hatching. They look like walking, downy fuzz balls. They first fly when 2 weeks old and reach adult size in 3–4 months. During the breeding season, quail live alone or with their chicks. But once breeding is over, generally by September, quail unite into small flocks with 3-20 members. We call the flocks “coveys”. Membership in the covey is not fixed and some individuals move from covey to covey. A covey roosts at night with members in a circle, shoulder to shoulder, facing outwards towards danger. Coveys communicate with other coveys using a special whistle call. The covey call is given at about 15 minutes before daylight. Great habitat supports about one bird/acre, and from a well-positioned listening spot, a person can sometimes distinguish 10 coveys speaking to each other in the predawn hour. Quail live short lives: fewer than 20 percent live to be a year old. A three year old quail is well past middle age, and a 5-year-old quail is truly ancient. Predation is the leading cause of death. Cooper’s hawks relish the big breasted adults. Even the eggs are sought after by predators. Large rat snakes can swallow every egg in a nest, and the parent quail too, if caught by the snake. Quail are highly productive breeders, which is nature’s way of handling the high predation. 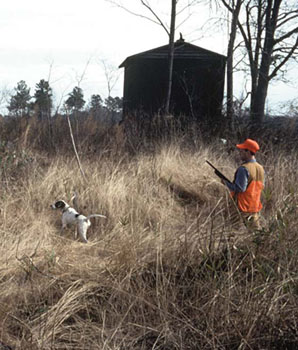 Bobwhites are classified as a game bird in North Carolina. Cooked quail have excellent flavor, and are delicacies at the dinner table. The hunting season begins in October and ends in February. A typical hunt lasts about 4 hours, during which 2 coveys are found, and 2 quail are bagged. Quail are hunted with a bird dog. The dog travels ahead of the hunter, and upon finding a covey, it freezes in place, telling the hunter, “Here they are!” When the hunter approaches, the birds explode into flight, and the hunter shoots with a shotgun. Landowners can manage their property to increase quail populations, if not for hunting, then just for the pleasure of seeing the birds, and especially, hearing the male whistle “bobwhite.” The call means that summer is here and all that comes with it—tomato sandwiches, blackberry cobbler, watermelon. The call promises quail hunters memorable days a field in the company of hard working bird dogs. To many Southerners, quail are the south’s greatest bird, and hearing “bobwhite” is a comforting sound

reminiscent of home and tradition.

The North Carolina Wildlife Resources Commission has several projects involving Northern bobwhite. We measure hunting effort and harvest once every three years at the statewide level. NC State University performed this work for the Commission in 2008. The Commission works with the University on several quail research projects.

We collect similar data annually, using a select group of hunters who participate in our Avid Quail-hunter Survey. We measure breeding quail abundance annually, by listening for calls at selected listening stations. One such station is located in the grassland project in the western Piedmont. Bobwhite are just one of several grassland bird species under study.

A very informative article. Enjoyed reading it. Predation, habitat loss with human encroachment, and just habitat loss in general is what happened to our quail. That and eye worms. Eye worms in Texas and Oklahoma kill more quail than anything.

Someone mentioned they hope the lone quail can survive their cat. Keep your cats inside. Domestic cats are a highly efficient predator. While I’m out hunting I shoot every cat I see unless it’s in someone’s front yard. I live in the country and believe me, I have no cats near my house. And I have quail here too.

I live in town in Newton NC,

I live in town in Newton NC, we have a single bobwhite quail visiting our yard. His lone cry is haunting as it is never answered. Is there anything we can do to help him? He seems to have lost his family. Can he be caught and relocated?

Thank your for visiting NCpedia and for sharing this question. I have emailed you at the address you included with the link to the Wildlife Resources Commission page about wildlife problems: https://www.ncwildlife.org/Have-A-Problem. You may want to contact them for help.

I've lived in my Gastonia, NC

I've lived in my Gastonia, NC neighborhood for 25 years and just heard our first male Bob White call last night and this morning 5-3-18. Of course, in our urban area, there was no answering call. Not sure where he came from or how he will survive our cat. Didn't know whether you were still studying their range in NC.

I would like to raise them and release them just to hear them. Can I obtain chicks from the wildlife service?

Thank you for your inquiry. Besides contacting the North Carolina Wildlife Resources Council directly. Their contact information is here: http://www.ncwildlife.org/contacts.aspx. You can also contact your local office of the Farm Service Agency (US Dept. of Agriculture) for assistance. They have a conservation reserve program for the Northern Bobwhite Quail. That information is below as well. Please let me know if you need further assistance.

Hi, thanks for writing. I am

I am forwarding your comment to our Reference Services who can help you further. Their contact information is here: http://statelibrary.ncdcr.gov/contact.html

I love the northern bobwhite

I love the northern bobwhite quail