by Dale Threatt-Taylor and Terry Sharpe 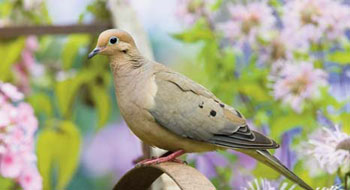 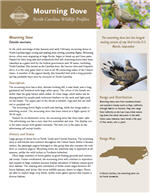 Monogamous; paired for life. 2–5 broods in a nesting season, more in the South because of the warm climate; some doves may nest every month of the year in the South.

Called squabs. Usually two eggs, pure white. Incubated by both sexes, male by day, female by night. Young fed and brooded by both. Young fly directly from nest 14–15 days after hatching. Chicks are on their own within a week after leaving nest. Sexually mature in the spring following summer birth.

55 to 75 percent of juveniles do not survive first year. Adult mortality is about 55 percent annually.

Mourning doves nest from southeast Alaska and southern Canada south to Baja, California through Mexico to Panama. They also range from California to the East Coast. Adult mourning doves live about two years in the wild. Some cases, however, have noted a life span of five, seven, and 10 years.

In North Carolina, the mourning dove can be found statewide.

In the early mornings of late January and early February, mourning doves in North Carolina begin cooing and making their circling courtship flights. Mourning doves, often seen migrating in large flocks, begin to break up and form pairs. Named for their long tails and melancholy bird call, mourning doves have been classified as a game bird by the federal government and 39 states, including North Carolina. Also known as the Carolina dove, the Soccoro dove and Grayson’s dove, it is the only game bird to nest in all 48 connecting states of the United States. A member of the pigeon family, this beautiful bird with a long-pointed tail has probably been seen by everyone in North Carolina. 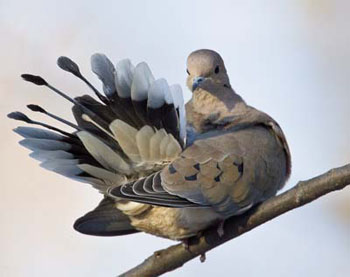 The mourning dove has a thin, delicate-looking bill, a neat head, and a long, graduated tail bordered with large white spots. The colors of the female are duller than the gray-brown adult males. At close range, adult males can be distinguished by purple-pink iridescent feathers on the neck and light pink on the breast. The upper part of the throat is whitish. Legs and feet are dull red or purplish red.

Large groups of doves live in North, South and Central America. The mourning dove is well-known and common throughout the United States. Before it became extinct, the passenger pigeon belonged to this group that also contains the rock dove or common pigeon. Mourning doves are relatively easy to approach at all seasons, unlike the wild turkey or Northern bobwhite.

Often large numbers of doves gather at good feeding grounds and communal roosts. Unless overhunted, the mourning dove will continue to reproduce and expand in large numbers because human alteration of habitat creates good dove habitat. The clearing and cultivation of fields create edges between different habitats, and doves, like most wildlife species, thrive in edges. Doves are able to exploit large crop fields, unlike some game species that require a diverse habitat. 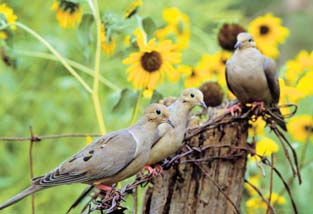 Mourning doves have a strong tendency to return to the same area from one year to the next. They alternately feed and nest during the day and flock to some regular watering place late in the afternoon. There are fewer mourning doves in North Carolina during October and November than at any other time of the year. Large movements and instability among flocks of young birds in June and July have also been noted. Flocks as large as 150 birds disappear from one day to the next. The largest dove populations of the year occur in August and September during the fall migration.

Egg-laying begins in March and persists into September—the longest nesting season of any bird in the United States. The mourning dove nests in wooded edges of fields, pastures, open areas, forests and suburban areas. The favorite nesting trees are loblolly pine and shortleaf pine. Nests are constructed primarily of small twigs and are not very elaborate. Ground nesting in North Carolina occurs only on the treeless islands at the edge of the ocean.

Complete nesting requires about one month from constructing the nest and egg-laying to the exit of the young. Half of all nesting attempts end in failure. Successful nesting averages about three broods per summer. Mourning doves lay two white eggs that hatch in 14 days. After hatching, the young are fed crop milk for about three days and then fed seeds. Crop milk is a special secretion produced in the gullets of both parents and is very nutritious for young doves. The young grow rapidly and leave the nest in about two weeks. After only a week more, the young are completely independent. 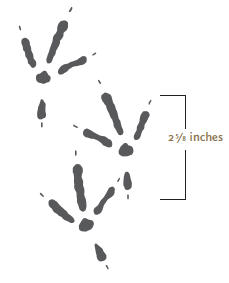 Largely seed eaters, these soft-footed birds do not scratch for their food so the seeds must be plainly visible and readily accessible. Mourning doves feed mostly on weed seeds and waste grain from cultivated fields.

The mourning dove is one of the most popular game birds in North Carolina. The opening of dove-hunting season in early September signals the beginning of the hunting season for thousands of Tar Heels. The dove is also valuable to humans because it eats the seeds of weed species, and bird watchers enjoy them at bird feeders. Because the bird is such a prolific breeder, properly regulated hunting has no negative effect on the dove population.

Produced January 2009 by the Division of Conservation Education, Cay Cross–Editor.