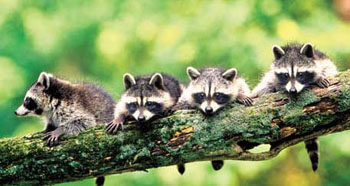 Height: 12 in. at the shoulder 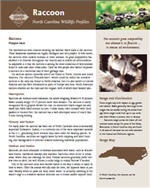 Males may mate with more than one female. Breeding season usually begins in February and continues through April. Gestation is 63 to 65 days.

Called cubs. Litters of 1 to 8 (usually 2 or 3) are born in April to June, in hollow trees or ground burrows. Cubs open their eyes at 19 days, begin following their mother at 8–12 weeks of age, and are dependent on her until they are at least 3½ months old. They leave to establish their own home ranges at 9 months. Raccoons reach full sexual maturity in 2 years; however, females may mate at 10 months.

Up to 16 years in the wild, but most die within their first 2 years. Average life span is probably 2 1/2 years.

Home ranges vary with respect to age, sex, and habitat. Males generally have large home ranges that are smaller during the winter. Average home range varies from 99 to 247 acres and often follows a stream, river or swamp. Raccoons range across the lower 48 continental states except for parts of the Rocky Mountains. They are found statewide in North Carolina, but are most abundant in the Coastal and Piedmont regions. 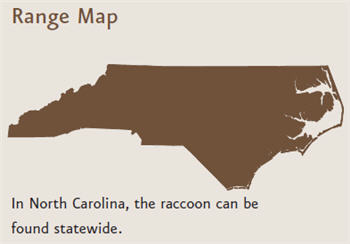 These charismatic mammals are highly intelligent and resourceful. In folk stories, raccoons often outwit humans or other animals. Their great adaptability has allowed them to flourish throughout history and in almost all environments. They are common in cities and other urban areas, and many people have surprised a raccoon on a nocturnal raid of their garbage cans.

Three raccoon species are found in North, Central and South America. Our raccoon (Procyon lotor) is the only one found in North America, but it is also native to Central America and has been introduced in parts of Europe and Asia. 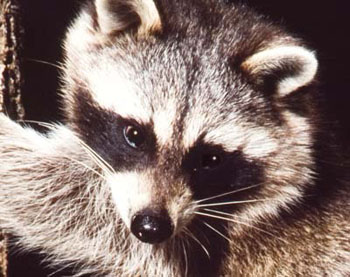 The raccoon is easily recognized by its grayish brown fur coat, its distinctive black-ringed tail, and black “mask” around its eyes. Unlike many other animals with thick padded or hooved feet, raccoons have a well-developed sense of touch that they use during feeding.

For many years, the raccoon has been one of North Carolina’s most economically important furbearers. Indeed, it is currently one of the most important animals in the U.S., generating more revenue than most other furbearing species. Raccoons in North Carolina are legally taken by regulated trapping and hunting.

Raccoons are most abundant in habitats associated with water, such as bottomland forests, hardwood swamps and marshes. Raccoons often occur in urban areas, where they can scavenge for food. Females generally prefer hollow trees as dens, but will choose a rocky ledge or empty burrow if needed. Though raccoons appear to wash their food in water, they in fact locate and capture food by dabbling at the water’s edge.

In colder regions, raccoons may enter a deep sleep during winter months, but they are not true hibernators. On mild days, they may wake up and search for food. Raccoons in North Carolina are more active than those in northern states due to the warmer winters 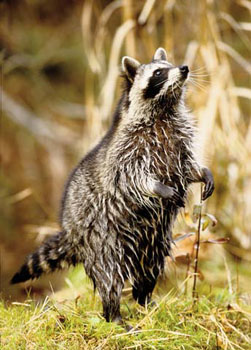 There are multiple sources of mortality in raccoons: hunting, trapping, automobiles, and disease outbreaks, which are often associated with malnutrition and/or dense raccoon populations. Outbreaks of canine distemper and rabies are the most noted diseases.

A rabid raccoon can be characterized by aimless wandering, lethargy, uncoordinated movements, weakness in the hind legs, paralysis and loss of awareness. If you are concerned that a raccoon is sick or may be rabid, do not approach or attempt to capture the animal. Contact local health officials for assistance.

It is becoming more common for raccoons to be seen during the daytime, and daytime activity is not a sign that the animal is diseased. Rather, raccoons are responding to the abundance of food available in these areas during the day, combined with the lack of threats. Interactions between people and raccoons are uncommon unless raccoons become habituated. This means they associate humans with food due to being fed, either intentionally or unintentionally. Habituation can occur from unsecured garbage, pet food left outside, or even bird feeders that raccoons can access. To avoid conflicts with raccoons and other wildlife, people should keep their yards and neighborhoods clean of unnatural food sources such as pet food and unsecured garbage. People that feed feral cats will likely attract raccoons and other wildlife

To see a raccoon in the wild, go to
https://www.nationalgeographic.com/.

Is it legal to own a baby

I would suggest contacting the N.C. Wildlife Resources Commission to find out laws and regulations regarding keeping raccoons as pets.

Okay, warm-fuzziness aside, since no city/county/state agency is willing to respond or offer a viable solution to wild animal issues in urban areas, when does the presence of raccoons, opossums and coyotes become classified as a problem in neighborhoods where small children and pets are present, to the point that "dispatching" the animals is not something which gets the "dispatcher" dragged before a judge for discharging a firearm within city limits??