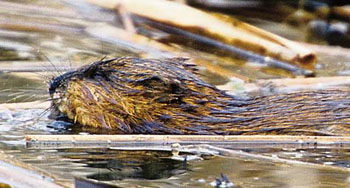 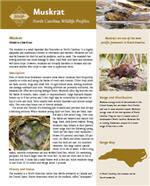 Muskrats are mostly promiscuous. Sexually mature in 8 to 10 months. Can breed at any time of the year.

Kits. Gestation period of 29 or 30 days. Average litter size is 4. Adults produce an average of 2 to 3 litters a year in North
Carolina. Kits are naked and blind at birth, weighing less than 1 ounce each. 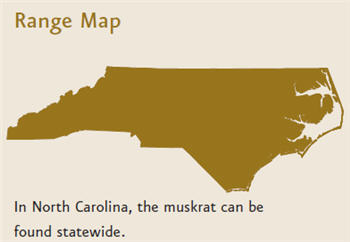 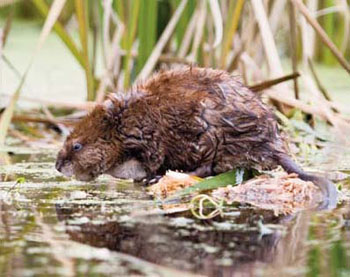 The muskrat is a small mammal that flourishes in North Carolina. It is highly adaptable and establishes colonies in riverbanks and marshes. Muskrats are coveted by humans for their fur and by predators, such as mink. The muskrat’s burrowing activities can cause damage to dikes, road beds, and dams and muskrats will harm crops. However, muskrats are virtually harmless to humans and can entertain anyone who stops to take time to appreciate them.

Piles of shells from freshwater mussels show where muskrats feed frequently, usually on rocks and along the banks of rivers and streams. Other food items are bark, acorns, frogs and small fish. In agricultural areas, feeding muskrats can damage soybeans and corn. Feeding activities are primarily nocturnal, but muskrats are often seen during daylight hours. Muskrats often dig burrows into the banks of streams, lakes, canals or impoundments. Large haystack-shaped houses up to 8 feet across and 5 feet high may be constructed in marshes on top of roots and mud. Dens usually have several chambers and several escape exits. Den sites may house one or several animals. 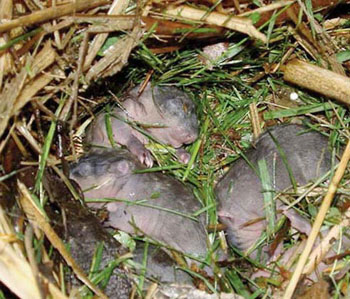 The social unit consists of a breeding pair of adults and juveniles that occupy a breeding territory. When muskrat young (kits) are born, they are blind, hairless and a few inches long. Over time the babies are weaned and mature into large, thick, dark furred rodents. Young muskrats may remain in their parents’ home range until the following spring. There are two basic color variations — brown (70 percent) and black (30 percent). Jet black and blond varieties do exist but both are rare. An excellent swimmer, this large rodent spends much of its life in water. It has a long naked, laterally compressed tail and webbed hind feet, which, for swimming purposes, are much larger than the front feet. Its ears are short and its fur is thick and soft. It looks like a small beaver with a thin tail. Adult muskrats range in size from 10-14 inches and weigh about 2 pounds.

The muskrat is a North American native that dwells primarily in Canada and the United States. Native Americans relied on the muskrat, called “musquash,” for food and clothing. European colonists recognized the value of the muskrat; like beavers, muskrats were an important commodity in early trade. Due to the value of its fur, muskrats were introduced in Europe and Asia in the early 1900s. Essentially an amphibious mammal, the muskrat spends its life in ponds and rivers, feeding on aquatic vegetation and on crops such as soybeans and corn. In general, it survives well and is not in danger of extinction.

Muskrats are abundant in North Carolina and can be legally trapped during open season. Because population densities are high in many areas, muskrats are more easily trapped than most other furbearers. However, the value of their pelts is relatively low. 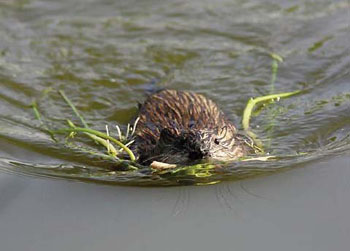 Muskrats require a permanent supply of water. They occupy a variety of wetland habitats including fresh- and saltwater marshes, canals, ditches, ponds, lakes, rivers and other streams. Primarily plant eaters, muskrats feed on the roots, shoots and leaves of various aquatic plant species. They sometimes build platforms of vegetation for feeding activities in ponds and marshes. Mussels and clams are also a common food source. Piles of shells from freshwater mussels show where muskrats feed frequently, usually on rocks and along the
banks of rivers and streams. Other food items are bark, acorns, frogs and small fish. In agricultural areas, feeding muskrats can damage soybeans and corn. Feeding activities are primarily nocturnal, but muskrats are often seen during daylight hours.

The muskrat is a very shy, non-aggressive animal that avoids humans. Because of its potential for damaging manmade earthen dikes, dams and irrigation systems, there is a need to control its population. Licensed trappers take a variable number of muskrats each year. In addition, many others crossing highways are hit and killed by cars.

Much of what we know about muskrats in North Carolina is from extensive research efforts conducted by N.C. Wildlife Resources Commission biologist, Kenneth A. Wilson. Wilson initiated several research studies from the 1940s through the 1960s to determine why the muskrat population was declining. Wilson examined various life history traits, such as reproduction and kit development, and the muskrat’s preference for certain habitats and foods. He also studied the influence that certain factors, such as weather, predators and varying water levels, can have on muskrat populations. Based on his research the Commission made recommendations for managing muskrats as a valuable natural resource, while offering suggestions to prevent or resolve conflicts from damage of abundant muskrat populations.