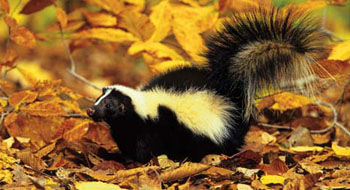 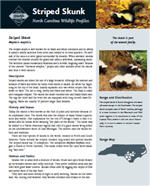 Promiscuous; males will mate with several females. Breed between mid-February and mid-April. Males remain solitary except when mating. Gestation period is 66 to 75 days.

Called kits. Litter size is 5 to 9. Kits born May to early June. Kits nurse for about 7 to 8 weeks and open their eyes at 22 days. Kits follow their mother on hunting trips at 2 months old and leave the family in the fall. Musk is present at birth and can be emitted at 8 days old. Sexually mature between 1 and 2 years. 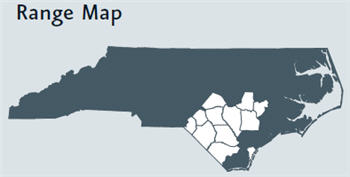 The striped skunk is found throughout the lower 48 states except in the Southwest. The striped skunk occupies most of North Carolina, although it is most common in the Mountain and Piedmont regions. It is uncommon in most of the Coastal Plain, where it did not occur historically; it is rare to absent in certain Coastal Plain counties.

The striped skunk is well known for its black and white coloration and its ability to spray a smelly secretion from scent sacs located in its hind quarters. On each side of the anus is a scent gland surrounded by muscles. When alarmed, skunks contract the muscles around the gland and spray a yellowish, nauseating musk. The secretion causes momentary blindness and a terrible, lingering smell. Because of this natural “chemical weapon,” people and other animals avoid the skunk and treat it with caution. 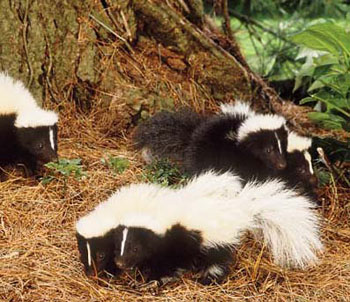 Striped skunks are about the size of a large housecat. Although the amount and location of black and white fur varies from skunk to skunk, the white fur, beginning on the top of the head, usually separates into two white stripes that run down its back. The tail is long, bushy and black and white. The head is small and triangular-shaped. The skunk has small rounded ears and beady black eyes. The legs are short and the front feet are equipped with long curved claws for digging. Males are usually 10 percent larger than females.

Today, the skunk is best known as the butt of jokes and cartoons because of its unpleasant odor. The skunk was also the subject of many Indian superstitions and myths. One explanation for the city of Chicago’s name is that it is named after an Indian word meaning “the place-of-the-skunk.” The name may be related to a Native American legend that told of a giant skunk being killed
on the southwestern shore of Lake Michigan. The natives used the skunk for food and medicine.

There are four species of skunk in the world, located in North and South America. These include the striped, hooded, hog-nosed and spotted skunks. The striped skunk has 13 subspecies. The subspecies Mephitis mephitis elongate is found in North Carolina. This name comes from the Latin word meaning “bad odor.” 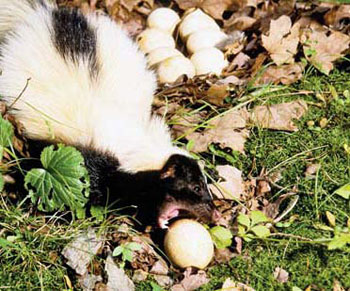 Skunks live in areas with a mixture of woods, brush and open fields broken up by wooded ravines and rocky outcrops. They prefer timbered areas and pastures with good water sources. Skunks create dens by digging into slopes of hills and spend most of the day there.

They hunt and move mostly at night or early morning. Skunks do not hibernate, but, during cold weather, they become dormant and remain in the den most of the winter. During this time their body temperature remains near normal. Several skunks may share the same winter den.

The skunk is an omnivore, with about 80 percent of its diet consisting of insects, worms, small rodents, bird eggs and reptiles. It also eats berries, acorns and other vegetable matter.

Skunks are adept at digging and swimming. They primarily use their nose and ears to forage for food, due to poor eyesight. Skunks frequently leave evidence of their feeding: small, cone-shaped holes in the soil, where they’ve dug for grubs.

On average, skunks live about three years in the wild. Disease and predation usually cause their deaths.

Because skunks move mostly at night, many people never see them unless they are raiding a trash can or get hit by a car. If a person frightens a striped skunk, the skunk first faces the person, straightens its legs, arches its back, puts its tail straight up and bristles the tail hair to give the appearance that it is bigger than it is. It also clicks its teeth and stamps the ground. If the person or animal continues to advance, the skunk bends its body sideways in the form of a “U” so that the hindquarters face the person, then it squirts the musk. Ammonia or tomato juice help remove the odor, if you are sprayed. Carbolic soap and water is best for washing the skin. 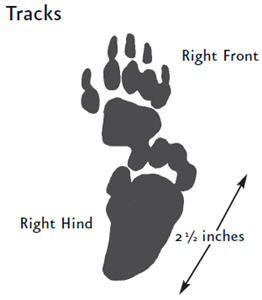 Although skunks are seldom trapped for their fur in North Carolina, they are trapped in the northern portions of their range where their fur is finer and the black color more intense. Skunks are affected by people in other ways, through habitat destruction, car accidents and poisoning. Since skunks will eat bird eggs, they are known predators of domestic chicken eggs, as well as turkey and waterfowl eggs. Although illegal, skunks are often poisoned in the mistaken belief that all skunks have rabies. While skunks are one of the main carriers of rabies in North America, the chances of encountering a rabid skunk are very low.

Skunks, like several other wild animals, can thrive in suburban and urban areas. To avoid problems with skunks, follow some basic rules:

Do striped skunks stay in one

Do striped skunks stay in one place or do they move around?

Hi! This might help. https://www.ncwildlife.org/Portals/0/Learning/documents/Profiles/skunk.pdf scroll down to Habitats and Habits.

Is it possible for there to

Is it possible for there to be brown skunks in North Carolina? Tonight i opened my front door to find a small brown and white skunk on my porch. My mom said it wasn't possible but in 100% sure it was brown

The BEST remedy for removing

The BEST remedy for removing the awful skunk scent from you dog :
Mix in a bottle:
1 quart hydrogen peroxide
1/4 cup baking soda
1 tsp. Dawn dish detergent
Saturate you dog with this formula for about 20-30 minutes then add water soap up and rinse!!!
Its the only recipe that works!!
( avoid your pets eyes)
Nothing else works!!!!

Within 2 minutes of home, in

Within 2 minutes of home, in Canton, NC. I watched a fat, white with a black stripe skunk waddle across the road. YES, white furred body with the black stripe running down its back leading into its tail. Unfortunately, I was unable to snap a photograph before it waddle out of sight.

Is it possible for a skunk

Is it possible for a skunk to spray a dog because my friend dog has such a odor that seems to stay on him no matter what the owner does what can he do?

I live outside waynesville,

I live outside waynesville, nc and have twice seen unusual colorations in skunks in my neighbor hood. Several years ago, i saw an all-white skunk cross right in front of my car. Then yesterday, I had a daylight sighting of a skunk that was all black except for a triangular white shape on the back of its neck. The white did not go down the back at all.

The information on this site

The information on this site is very informative and accurate based on my research and personal experience. We spotted a skunk at our house in a residential area. All sightings were in the daylight hours and had me concerned, for this was not necessarily normal behavior. After calling Cabarrus Animal Control which is partnered with the Sheriff's office, they referred me to a trapping company. The trapping company wanted $425 for 2 weeks worth of trapping. It would cost another $425 if they did not trap it in those two weeks. Once captured they would have to "put down" the animal by law. We have just taken precautions to keep it from taking up residence. We have no idea where it actually is sleeping.

You’ll want to get in touch with the Animal Control department in your town or county government offices.  They don’t necessarily deal with the problem themselves, but they usually have privately contracted removal services to whom they can refer you.

Depending on where you live, you may want to get in touch with TruTech, which contracts with many local County offices:

I live in an old farmhouse.

I live in an old farmhouse. I think I have a skunk that lives under the house as I regularly wake up in the early morning hours unable to breathe from the odor. How do I go about getting rid of this beast?