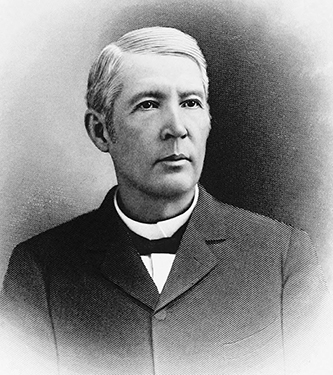 Augustus Leazar, farmer, educator, and public servant, was born on his father's plantation, Leazarwell, in Rowan County. Descended from French Huguenot, German, and Scotch-Irish stock, he was the son of John and Isabella Jamison Leazar. At age thirteen he enrolled at Davidson College and four years later, in 1860, was graduated with the first honors.

Although his father originally opposed secession, Augustus Leazar helped to organize Company G of the Forty-second Regiment, North Carolina Troops. On 16 Mar. 1862 he was commissioned first lieutenant. His regiment served in Robert F. Hoke's brigade and fought at or near New Bern, Richmond, Cold Harbor, Petersburg, Fort Fisher, Kinston, Bentonville, and other areas. He served until the Confederacy collapsed, and he was paroled on 2 May 1865.

The year the Civil War ended he married his childhood sweetheart, Cornelia Francis McCorkle, daughter of William Brandon and Mary Marshall McCorkle. The couple had two sons and one daughter, but only the daughter, Carry Augustus, reached maturity. Leazar's first wife died, and in 1888 he married Clara Fowler, daughter of William G. and Margaret Alexander Fowler. They had one son, Augustus, Jr.

Starting in 1866 Leazar taught classical schools at Prospect, Coddle Creek, and Mooresville in Iredell County. In Mooresville, where he established his permanent residence, he was coprincipal of a school with his brother-in-law, Stephen Frontis. Leazar also taught at a summer normal school established at The University of North Carolina in 1877 by President Kemp Plummer Battle to train common school teachers in educational methods. In 1870 Leazar received an honorary degree from Davidson College; when the college celebrated its fiftieth anniversary in 1887, Leazar delivered the address to the Alumni and Literary societies. For many years he served on the Davidson College Board of Trustees and was recognized as one of the leading educators in the state.

His political career began in 1882, when he was elected to the North Carolina House of Representatives from Iredell County. He served four consecutive terms (1883–91). According to Josephus Daniels, in the Tar Heel Editor, he was the most influential Democrat in the house during the 1887–89 session, and in 1889 he was elected speaker.

Leazar was a forward-looking and progressive legislator. He endorsed the objectives of the Watauga Club, formed in 1884 by a group of young Raleigh men under the leadership of William J. Peele and Walter Hines Page to make North Carolina a more dynamic state. Leazar's greatest legislative accomplishment grew out of the Watauga movement. He was coauthor with Charles William Dabney of a bill to establish the North Carolina Agricultural and Mechanic College in Raleigh. Leazar introduced and fought for passage of the bill that became law in 1887. When the college opened in 1889, Leazar was a member of its first board of trustees, and the Leazar Literary Society was named in his honor. Leazar also wrote and introduced a bill in 1885 to increase the appropriation for The University of North Carolina.

Leazar's fight to curb the power of railroads equaled his services in behalf of education. He publicized the fact that railroad property was woefully undertaxed. Moreover, he pointed out to the General Assembly of 1889 that although railroad property in North Carolina was worth more than $50 million, the state collected less than $28,000 annually in taxes. As a result of his efforts, the railroads surrendered their privilege of exemption from taxation. He further sought to curtail the special privileges enjoyed by railroads when he opposed their lease of convict labor. By 1892 the practice had generally been abolished. He also favored the establishment of a railroad commission, an objective achieved by the farmer-controlled legislature in 1891.

In 1888 Leazar declined the nomination of lieutenant governor. If he had accepted, he would have succeeded to the governorship on the death of Governor Daniel G. Fowle. Refusal to run for lieutenant governor did not indicate any distaste for politics. Leazar owned a number of farms in Rowan County and during the 1880s became involved in the Farmers' Alliance movement. In 1890 and again in 1892, he ran for Congress as the farmers' candidate from the Seventh Congressional District but was defeated by the powerful conservative Democrat, John Steele Henderson. A brilliant orator, he served as Seventh Congressional District lecturer for the North Carolina State Farmers' Alliance. An allianceman of moderate views, he opposed the St. Louis platform of 1892, which demanded government ownership of railroads and ignored the protective tariff issue. He supported the nomination of conservative alliance leader, Elias Carr, for governor and campaigned vigorously for Carr's election.

Undoubtedly, Leazar's most distinguished position was as superintendent of the state penitentiary from 1893 to 1897 during the administration of Governor Carr. The penitentiary became self-supporting for the first time in its history in 1896. In fact, it yielded a surplus of $91,694 at the end of that year despite losses suffered on state farms as a result of floods. The practice of employing able-bodied prisoners on state farms and road construction was continued and expanded during Leazar's administration of the prison system. At the end of his tenure, he recommended separating the young prisoners from older and more hardened inmates and liberalizing the policy of commutation of prison sentences for good behavior. His treatment of prisoners was enlightened and humane. In 1895, before Leazar had completed his term, the Fusion legislature abolished his office and appointed a successor under a different title. Leazar refused to leave his post and won his case in the courts.

For many years Leazar served on the North Carolina Board of Agriculture and The University of North Carolina board of trustees. He was a director of the Bank of Mooresville and of the Home Insurance Company of Greensboro. Deeply religious, he joined the Presbyterian church at age fourteen and for forty years was an elder in the church.

Contemporaries like newspapermen Josephus Daniels and Samuel A'Court Ashe and politician Thomas J. Jarvis regarded him as a man of strong convictions who was unwilling to compromise his principles. Courageous and honest, he was an efficient executive both as speaker of the North Carolina House of Representatives and as superintendent of the state penitentiary. On leaving the latter position, he retired to private life because of ill health and died of diabetes. His funeral was held in the Presbyterian church in Mooresville.