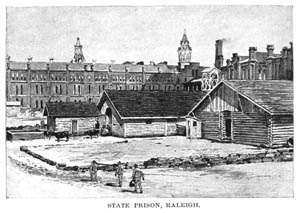 On January 6, 1870, North Carolina’s State Penitentiary accepted its first prisoners, housing them in a temporary log structure that was surrounded by a wooden stockade. Charles Lewis, a twenty-two-year-old African American convicted of robbery in Johnston County, was the first person to be admitted, and his accomplices, Eliza and Nancy Richardson, were the second and third individuals received by the prison and the first women.

Prior to 1870, North Carolina, unlike the majority of other states, did not have a central, state-operated prison. Responsibility for housing convicts and administering punishment rested with the counties. As local jails became overcrowded and expenses mounted, public officials began to examine the possibility of opening a state-funded institution to house long-term inmates. In 1846, there was a statewide vote on the desirability of a state penitentiary, but North Carolina’s voters, many of whom still believed in the efficacy of corporal punishment, such as whippings, croppings, and brandings, overwhelmingly disapproved of the plan. Not until mandated by the Reconstruction-era Constitution of 1868 did North Carolina fund and build a state penitentiary. 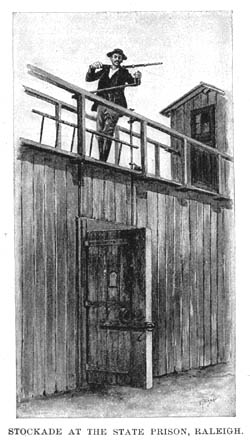 Operating under this more progressive plan of government, the General Assembly created a penitentiary committee in August 1868 and charged it with selecting a location for the new structure and contracting to have it built. This committee chose and purchased land near Lockville, a community in the Deep River Valley of Chatham County, but the legislature nullified the purchase and began anew after an investigation discovered that the entire process had been fraudulent. The assembly disbanded the original committee and selected a new commission, ordering them to locate the prison near the state capital and giving explicit limitations on acreage and price. The new committee, of which Alfred Dockery was president, purchased about twenty-two acres in southwestern Raleigh. This site had easy access to a railroad line and was adjacent to a stone quarry from which material to build the structure could be removed. With the location chosen, construction of a temporary facility began in late 1869.

The prison into which Charles Lewis and the other inmates were admitted on January 6, 1870, differed greatly from Central Prison, the modern structure that now occupies the same location. A report submitted by the penitentiary’s assistant architect on November 1, 1870, describes the original wooden edifice as such:

“The Work has been as follows: 2965 ft. Prison Stockade made of long leaf pine poles, hewed on two sides placed close together and set four (4) in the ground, standing fifteen (15) ft. above ground. In which are two (2) large Wagon gates, one (1) Railroad gate, and one small gate for entrance of Persons on foot.

There are twenty (20) Prison Cells, two (2) Hospital Rooms and (2) Rooms for Lockups, all of which are 19x19 ft. square, 8 ft. pitch, built of logs, and sealed with heavy boards on the inside, and all covered with one continuous roof...

There is 850 ft. Railroad Track running in the grounds, and connecting with The N. C. Railroad, also 870 ft. heavy plank stockade enclosing the quarry.”

Believing that the state penitentiary should be self-supporting and that manual labor was beneficial for the prisoners, state officials utilized the readily available and inexpensive inmate work force to construct the permanent buildings, walls, and fences. The process took almost fifteen years and over one million dollars, but in December 1884 the permanent buildings were completed and occupied. The old log cells, which were eventually used as storage bins for animal feed, survived for several more years, with some burning in 1887 and others removed over time.

Looking for my father who was

Looking for my father who was in your prison in the 70's I think. William (Bill) Alexander Dodd. He was born in 1928 I think. He was a plumber.

Thank you for your comments! Please note that this is an encyclopedia article about the North Carolina State Penitentiary and that you have reached the Government & Heritage Library, part of the State Library of North Carolina. We are not the North Carolina Department of Public Safety, who is in charge of prisons in NC today.

I am referring your question to our library's Reference Team as they might be able to provide you with some resources and guidance to assist you with your search. A member of our staff will be reaching out to you soon via e-mail.

I am looking for any

I am looking for any information on my father William (Bill) Dodd born 2928. I know he was in there for 5 years or more.

I am seeking prison records

I am seeking prison records for Clarence Kelly. He was sent to prison in 1921 for the murder of his brother. He was paroled in 1924, but his parole was revoked in 1926. I am not sure when he was released. He was from Duplin County. Born around 1886.

Thank you for your comment! I am forwarding your inquiry to our library's Reference Team so that our staff can assist you in locating records. A member of our staff should be in touch with you via e-mail soon.

I do genealogy- Looking

I would like information on Jocephus Gaston (born 1851-1852) in Gaston County who supposedly escaped the state penitentiary sometime between 1871-1880. I found a news clipping that said he was arrested for stealing but later news reports in the late 1880's state he had murdered a man and that his trial had been in Asheville.

Seeking information about J C Parish (James Claude Parrish), born in 1848 in Johnston County. Lived in Wake County starting around 1870.
Incarceration for larceny about 1878 (in the Penitentiary for the 1880 Census). Would like to know more precisely when he was incarcerated and when he was released for that crime.

Executed by hanging in January 1890 for rape (sexual assault of his 12 year old daughter). Don't know when he was jailed but trial seems to have been Spring 1888. Appeal denied in late 1889.
If prisons were doing mug shots in the late 1880s, would love an image.
Would like any records that might have been retained by the prison.

Looking for trial transcripts and news coverage which the prison archives probably won't have. Advice on how best to find them would be appreciated.
Thanks for any help that can be provided!

Thank you for visiting NCpedia. I am going to to forward your reference request to the State Archives of North Carolina.