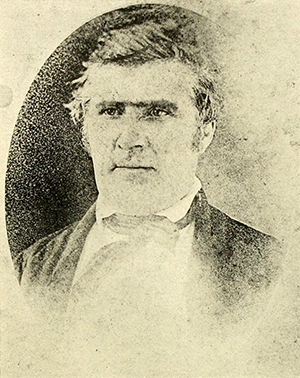 Alfred Dockery, farmer, legislator, congressman, and Baptist layman, was born in Richmond County, the son of Thomas Dockery. John H. Wheeler states that the Dockery family was very large and Thomas Dockery could not afford to educate his many children. Alfred, the eldest, took care of his younger brothers and sisters "and was often heard to say that he had never attended school for three months consecutively in his life." After marrying Sallie Turner of Anson County, who bore him seven surviving children (the total number is not indicated), he settled down to the life of a small farmer, increasing his estate by hard work. He returned to this life whenever his political fortunes suffered a reversal. For reasons unknown, he acquired the nickname or title "General," despite not having served in the armed forces. This nickname is used frequently in accounts of his life and was apparently the title by which his friends and associates addressed him.

Dockery's first, very brief appearance in public life was in 1822, when—at twenty-five—he was elected to the House of Commons from Richmond County. He returned to farming after his term, but thirteen years later was a delegate to the Constitutional Convention of 1835 from his county. John W. Moore, in "Early Baptist Laymen of North Carolina," says Dockery sided with Supreme Court Justice William Gaston in favoring the abolition of the Protestant-only restriction in the state constitution. Dockery made a speech in which he declared that, despite the "persecution and proscription" of the "Romish church," he, Dockery, would "comply with . . . charity . . . and return good for this evil." A more controversial proposal was his idea that free blacks should continue to be allowed to vote, which the convention rejected. However, he joined his fellow westerners in successfully ending the disproportionate power previously wielded in state government by the eastern counties. Moore, writing in the post-Reconstruction period, took the view that if the convention had also listened to Dockery's suffrage proposal—a very moderate measure that would have given the franchise only to those blacks with $250 or more in property—the horrors of Reconstruction would have been avoided.

Dockery ran for the newly reorganized state senate in 1836 as the candidate of the new Whig party. He served six terms in the senate, taking the standard Whig positions. Throughout his political career he was convinced that the Whigs and their platform of internal improvements and general reforms were the only hope of North Carolina or the nation. In 1845 he decided to run for Congress despite his party's decision to nominate Jonathan Worth. Dockery prevailed over Worth by 900 votes. Refusing reelection in 1847, he returned to farming until he again contested for Congress against Green W. Caldwell, an avowed Secessionist. Dockery, an equally avowed Unionist, campaigned even in those parts of his district adjacent to pro-Secessionist South Carolina "at the peril of his life." He ignored this seeming danger by openly advocating, as had President Andrew Jackson in the 1830s, a show of force by Federal troops if South Carolina attempted to secede. The courageous Dockery won by 1,200 votes and served again in Congress during 1849–51.

In 1854 the declining Whigs tapped Dockery as their candidate for governor against Thomas Bragg. Wheeler states their contest was "the campaign of campaigns" in North Carolina history, even though he was writing eight years after the 1876 "Battle of the Giants" campaign. But Dockery failed in his gallant bid by 2,000 votes.

Sadly convinced that the Whigs were dead as a political force in the state, Dockery, along with many other Whigs, joined the American or Know-Nothing party. It is not recorded whether he supported that party's nativist policy; it is known that his primary interest was to push for his old program of internal improvements, the support of which had made him a hero in the West.

Dockery probably hated to see war come in 1861; yet, like most Southerners, he loved his region and sent his sons into the Confederate Army. One, John Morehead Dockery, "fell victim to camp disease." After the war Dockery decided to make the best of the South's defeat, a decision for which Moore (and probably others) accused him of having become excessively fond of Yankee ways. Although he did not campaign when he was nominated for governor in 1866 (against his will) and lost by a wide margin, Dockery willingly served in the postwar Reconstruction government. First he was a member of the 1865 state convention that, if President Andrew Johnson had had his way, would have ended Reconstruction in North Carolina, but whose work was tossed out by the Radical Republicans in Congress. Then he was president of the board of directors of the state penitentiary. Even though it would cost him his vote, he supported the provisions of the Fourteenth Amendment, referred to as the "Howard Amendment" in North Carolina, depriving ex-Confederates of their political rights.

There is some confusion over the date of Dockery's death, some accounts noting that he died 12 Dec. 1875. Contemporary newspapers, however, give the date as 3 Dec. 1873. Dockery is remembered not only for his political contributions, but also for his strong support of the Baptist church and of Wake Forest College. He was a founder and trustee of the latter institution and gave it a set of blacksmith tools, among other gifts. He served as president of the Baptist State Convention for many years, and was treasurer of the North Carolina Bible Society. The Wake Forest Student said of him in 1906, "General Dockery was a very fine business man. In this way he was of great service to his church and the Convention. He was a good judge of men and firmly attached to what he deemed the right."