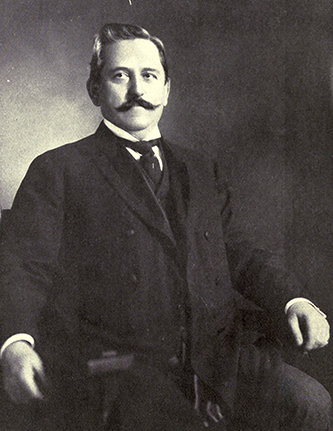 Charles William Dabney, chemist and educator, was born at Hampden-Sydney, Va., the son of Margaretta Lavinia Morrison and Robert Lewis Dabney, conservative Presbyterian theologian, professor at Union Seminary and the University of Texas, and Stonewall Jackson's chief of staff and biographer. He earned a B.A. at Hampden-Sydney in 1873, taught private school in Buckingham County for a year, and then entered the University of Virginia. There he studied chemistry under John William Mallet, choosing that subject to be of most use in rebuilding the wasted South. He was professor at Emory and Henry College in 1877–78. After graduate studies in chemistry at Berlin under August Wilhelm von Hofmann and at Göttingen under Friedrich Wöhler and Hans Hübner, he received the Ph.D. from Göttingen in 1880.

Dabney went to North Carolina as state chemist and director of the North Carolina Agricultural Experiment Station when The University of North Carolina at Chapel Hill was the seat of these offices, taught briefly in the university, and began scientific investigations of soils, fertilizers, and crops. In 1881 the isolation of Chapel Hill led him to move the Agricultural Experiment Station to Raleigh, where he established the experimental farm. His analyses produced the first discovery of new deposits of phosphate in eastern North Carolina and of tin at Kings Mountain and lithia at Lincolnton. In 1884 he was a founder of the Association of Official Agricultural (now Analytical) Chemists. Striking a lifelong theme of his interests, Dabney was among the leaders of the Watauga Club movement to develop a state school of practical arts. With Augustus Leazar, he wrote the bill that led to the founding in 1887 of the Agricultural and Mechanic College of North Carolina at Raleigh. His desk, on which the bill had been written, was presented to the college in 1952.

In 1887 he became president of the University of Tennessee and, for a few years, director of its agricultural experiment station. As president he relaxed the rules on military dress and required attendance, replaced 80 percent of the faculty, raised admissions standards, opened the university to women (1893), and established a law department, teacher training, and industrial education. In 1894 he took a leave of absence to serve as assistant secretary of agriculture in Grover Cleveland's second administration, in part to deflect a perceived plan of Julius Sterling Morton to discontinue federal funding for land grant institutions. There he established the Bureau of Soils, the Division of Agrostology, and the Dairy Division. To answer the low supply of personnel available to the department, he recommended that the department itself train scientists. He also changed the format of the department's Annual Report to that of the Department of Agriculture Yearbook, which remains useful to farmers and others today. He promoted the establishment of a national department of science and a national university, which took form as George Washington University. Hoping to retain him in Washington, President McKinley's administration in 1896–97 created for him the nonpolitical post of director of the scientific bureaus at the Department of Agriculture. But Dabney turned it down and returned to Knoxville in 1898.

After resuming his position at the University of Tennessee, he proposed a Conference for Education in the South through the creation of the Southern Education Board, to build support for free public education. From 1901 to 1903 he directed the board's Bureau of Information and Advice on Legislation and School Organization. In 1902 he established the Summer School of the South, providing training at the university for large numbers of teachers from throughout the region. When he left Knoxville in 1904, the University of Tennessee had the largest academic department of any institution of its class in the South.

In 1904 Dabney became president of the University of Cincinnati, but only after promises from the political bosses to stay out of the school's internal affairs. At Cincinnati he established a teachers' college, a graduate school, colleges of engineering and medicine, and a nursing school; integrated the law college into the whole university structure; and created programs in home economics, physical education, and vocational education. At his retirement in 1920 he left the country's first complete municipal university a school of national rank. Dabney later organized a firm of geologists and engineers in Houston, Tex., and conducted a search for and analysis of mineral deposits in the state. He also proposed the establishment of a school of practical arts in Mexico. Meanwhile, he continued his writing on education at an increased level. His major work, Universal Education in the South (2 vols., Chapel Hill [1936]), recommended federal aid to education. Among other works are History of Agricultural Education in the United States (1900), A Star of Hope for Mexico (1916), and Fighting for a New World (1919).

Dabney held LL.D.'s from Yale, Johns Hopkins, Davidson, and Washington and Lee. For his contributions to public instruction in France he was made a Chevalier of the Legion d'Honneur and Officier de l'Instruction Publique. He was director of the U.S. government exhibits at the Cotton States and International Exhibition in Atlanta in 1895 and the Tennessee Centennial Exhibition in 1897.

On 24 Aug. 1881, he married Mary Chilton Brent of Fayette County, Ky. They had three daughters, Marguerite Lewis, Mary Moore, and Katharine Brent. He was intensely interested in genealogy, and many manuscripts and unpublished records on his ancestors are in the Dabney Papers.

For a few years before his death Dabney had a home in Montreat. He died of a coronary thrombosis in Asheville, where he had stopped on his way from his winter home in Winter Park, Fla., to Cincinnati. His grave is in Cincinnati.