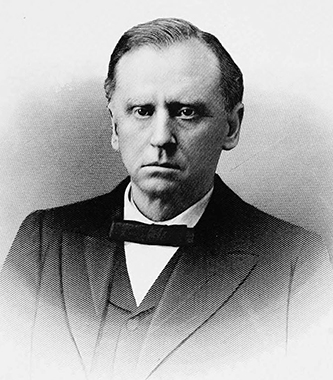 John Steele Henderson, member of the General Assembly, U.S. congressman, city planner, lawyer, and a founder of rural free delivery of the mail, was born in Salisbury of English ancestry, the son of Archibald II and Mary Ferrand Henderson, a descendant of General John Steele, comptroller of the U.S. Treasury under Washington, Adams, and Jefferson. He was born in the old John Steele Home, educated at Alexander Wilson's school in Alamance County, and entered The University of North Carolina in January 1862. Five months after the death of his brother at Cold Harbor on 1 June 1864, Henderson left the university at age eighteen and enlisted as a private in Company B, Tenth Regiment, North Carolina troops.

Following the surrender, he and other former students who had left The University of North Carolina before qualifying were granted degrees. Henderson then studied law, first under Nathaniel Boyden, then under Judge Richmond Pearson beginning in January 1866. Five months later he obtained his license and, although not of age, opened a law office in Salisbury. He was soon elected register of deeds, serving until September 1868, and in 1867 he obtained a license to practice in the superior courts. In 1871 he was elected a delegate to a proposed constitutional convention, but the convention question was not approved by a vote of the people. After declining nominations to the General Assembly in 1872 and 1874, he was elected a delegate to the constitutional convention in 1875 and became an active member of that body. He was a member of the 1876–77 General Assembly, which implemented changes made at the constitutional convention. In the next General Assembly (1879) he was returned to the state senate, and in 1880 he was elected a delegate-at-large to the Democratic National Convention. Henderson was one of three men selected to codify the laws of North Carolina; they did the job so well that these law remained unchanged for twenty years. In 1884 he was elected presiding justice of the inferior court of Rowan County, and the following October was nominated for a seat in the United States Congress. Henderson was elected to the Forty-fifth Congress and to four succeeding congresses, serving from 4 Mar. 1885 to 3 Mar. 1895.

In Congress, he was a member of the judiciary committee and chairman of the committee on post offices and post roads. His speeches on tariff reform and the internal revenue system attracted wide attention as campaign documents. In 1890, when the Farmers' Alliance was in the ascendant in the state, he declared that the subtreasury scheme was unconstitutional. His stand on the issue was opposed by most Democratic leaders, but so great was the public confidence in his judgment that he was reelected by a majority of more than 4,000 votes.

Henderson's most important work in Congress came in 1893, when he safeguarded an appropriation bill for the Post Office Department, amended to provide for free rural mail delivery, and an appropriation of $10,000 to carry it out. The first trial routes under the appropriation after it had been gradually increased to $40,000 were at Charleston, Halltown, and Uvilla in West Virginia, the native state of William L. Wilson, then postmaster general. At about the same time a trial route was established out of China Grove near Salisbury, Henderson's birthplace and residence. His opposition to the free coinage of silver in 1894 was contrary to the view of most of the farmers in his district and probably caused him not to seek reelection the following year. But time has shown his wisdom in opposing such a scheme in that day of frenzied financial panaceas.

Henderson was no less active in the development of his county and state. It was he to whom the Southern Railway turned in acquiring land near Salisbury for its large shops to repair steam engines. On this land stands the town of Spencer, which was begun in 1898. In the development of the Narrows of the Yadkin River, he was associated with Captain E. B. C. Hambley who secured capital for the development of water power in that area. Financial depression during this period aborted the scheme, yet the Aluminum Company of America took it over and later completed the development, including the great dam at Badin. As general counsel, Henderson won a crucial case in defending the rights of his clients against the aggression of other investors.

As probably the largest landowner in Salisbury and surrounding areas, Henderson was one of the city's earliest planners. When the Zion Wesley Institute (now Livingstone College) was established in Salisbury in 1882, Henderson with H. N. Woodson purchased 23 acres adjoining the institute and laid out streets and lots. In July 1891 he bought a large portion of land from Edwin Shaver and developed streets and lots in east Salisbury under the name of the Central Land Company. In 1900 Henderson's real estate company purchased land on the east side of the Southern Railway opposite Spencer and established Southern City. After its incorporation in 1901, the name was changed to East Spencer.

Henderson was generous with his vast holdings. In October 1889 he and his first cousin, Archibald Henderson Boyden, offered the Mill Bridge Alliance 25 acres of land in Salisbury for twenty-five years if it would move its annual fair to Salisbury. Again, in May 1900 Henderson offered a site for a proposed Lutheran college in the city. Both of these offers were declined, however. His son, John S. Henderson, Jr., later gave part of his father's land to the city of Salisbury for a park and donated land on which the Rowan Memorial Hospital is situated.

A member of St. Luke's Episcopal Church, Henderson was for many years senior warden. He wrote a history of the episcopacy in Rowan County which appeared in Dr. Jethro Rumple's History of Rowan County, published in 1881. During the 1880s Henderson and the Reverend Francis Murdoch published The Register, a quarterly parish paper. Henderson also was instrumental in acquiring a large house and lot in Chestnut Hill for a boys school, which operated successfully from 1891 to 1899.

His interest in education was further demonstrated in 1880, when, as a member of the General Assembly, he adjusted the city tax rate so that the graded school law for Salisbury could pass on the local level. As a result, the law passed in the city by a vote of 311 to 11 and two new graded schools, one for each race, were erected. This action probably explains why he was made chairman of the Rowan County school board, a post he held for many years. The year before his death he expressed the desire, while chairman, "to extend the school terms in the county . . . for the full period of nine calendar months."

After retiring from Congress, Henderson served as a state senator (1900–1902) and as an alderman for the city of Salisbury (1900). He was a trustee of The University of North Carolina from 1877 to 1886 and received an LL.D. from Trinity College (now Duke University) in June 1890. In 1877 he was elected a director of the Western North Carolina Railroad and served until 1880, when the railroad was sold by the state. He cooperated in the completion of that road and favored its sale. He was also a director of the Yadkin Railroad which ran from Salisbury to Norwood, a bank director, and a director in the Yadkin Valley Fair Association.

In October 1874 Henderson married Elizabeth Brownrigg Cain in Asheville; she was the daughter of William Cain of Hillsborough and a sister of Dr. William Cain, electrical engineer and mathematics professor at Chapel Hill. They were the parents of Elizabeth Brownrigg Henderson, who married Captain Lyman Cotton; Archibald Henderson, Kenan Professor of Mathematics at Chapel Hill; John Steele Henderson, Jr., electrical engineer for Westinghouse; and Mary Ferrand Henderson, who spent much of her life working in the Democratic party and promoting women's political rights.

Henderson died at Blythewood, the home he built on the edge of Salisbury in 1878, and was buried in the Chestnut Hill Cemetery.