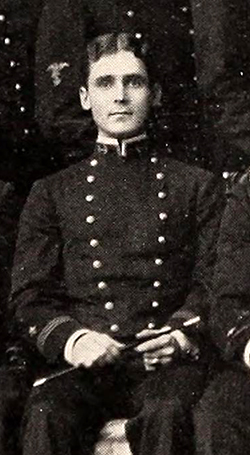 Lyman Atkinson Cotten, naval officer and diplomat, was born at Wilson but grew up at Cottendale, the family plantation, in Pitt County. He was the son of Colonel Robert Randolph Cotten and Sallie Sims Southall Cotten. After receiving early education from governesses, he attended Bronson's School in Warrenton and Horner's School in Oxford. He entered the U.S. Naval Academy at Annapolis, Md., in September 1894 and was graduated 6 Apr. 1898, two months early because of the impending war with Spain.

His first assignment was aboard the U.S.S. Columbia, which participated in the bloackade of Cuba and the capture of Puerto Rico. He then traveled to the Philippines via the Suez Canal and served in a number of joint army-navy expeditions during the Philippine Insurrection. In April 1900 he was commissioned an ensign and, at captain's pay, assumed command of the U.S.S. Zafiro, a tender for the commander-in-chief of the Asiatic Station. During this period he first served in Japan and China. In the summer of 1900, during the Boxer Rebellion, the Zafiro relayed to Washington, D.C., from the Gulf of Pichili the news of the relief of the foreign legations in Peking.

During tours in South America and the West Indies, Cotten was promoted to lieutenant junior grade and given orders as instructor of ordnance at Annapolis. After his duty at Annapolis, he returned to the Philippines and the Far East for three years, with the rank of lieutenant. In the summer of 1908 he was assigned to the Naval War College at Newport, R.I., first as a student and then as a member of the staff. This seems to have been a significant event in his life, for thereafter he was an avid student of naval history and world affairs. His study was of benefit to his several diplomatic posts and contributed greatly to his successes. Following his promotion to lieutenant commander in 1910, he served from 1912 to 1915 as naval attaché at the American embassy in Tokyo and at the American legation in Peking, where he was remarkably successful in the discharge of his duties. He was in Japan at the beginning of World War I, and his reports to the Navy Department were so comprehensive that they were used for years afterward. He was promoted to commander in 1916 and assigned to the U.S.S. Nebraska. At Vera Cruz, Mexico, he once again distinguished himself in the rescue of American refugees.

In February 1918, following the entry of the United States into World War I, Cotten received orders to New London, Conn., where he outfitted and sent to England a number of submarine chasers. He received a temporary promotion to captain and was ordered to command the American Naval Base and the squadron of subchasers at Plymouth, England. The most important command held by any officer of his rank, it was considered an admiral's billet. Besides other larger vessels, there were thirty-six to seventy-two subchasers, and it was their duty to safeguard the English Channel and the approaches to England and France. Cotten had the responsibility for the training and operations of the subchasers and was responsible, too, for the American troops, often as many as a thousand, who were in Plymouth awaiting transfer to field units. Cotten ensured smooth relations with the Allies by keeping a firm control over all matters at the base. During his command of the subchaser squadron, not a single Allied merchant ship was sunk, and not a single mine was laid within the area of his responsibility.

In March 1919, Cotten was made a member of the General Board of the Navy, its highest policy-making body, where he served for one year. In 1920 he again went to sea, this time in command of the U.S.S. Chattanooga. He also served as chief of staff of the U.S. Naval Detachment in the Eastern Mediterranean, which was under the command of Rear Admiral Mark L. Bristol, U.S. high commissioner of Turkey. Cotten proved to be of great service during the turbulent times following the armistice, and he took a conspicuous part in many diplomatic negotiations. He was promoted permanently to captain in 1921. In 1922, because of his great success as naval attaché in Japan, he was offered his choice of several positions as attaché to important countries, all of which he refused. The Navy Department insisted that he take the vacancy that soon occurred in Tokyo—a vitally important post requiring great delicacy. During this service, Cotten made many close friends among the Japanese, many of them powerful and distinguished people. He may have been the only American to call Admiral Togo "friend."

In 1923, Cotten was detached from attaché duty with the Office of Naval Intelligence and was appointed a member of the Naval Examining and Naval Retirement boards. Following this service, he returned to sea in command of the U.S.S. Richmond, the flagship of the Light Cruiser Division under Admiral Thomas P. Magruder. Cotten was in Honduran waters during the Revolution of 1924. The division was then ordered to Scotland, from which it returned as the escort of the Army World Fliers. With the unit was an Italian plane piloted by a Lieutenant Locatelli, with a crew of three; the Italians went down at sea in a fog off the coast of Greenland, and the Richmond located them after a three-and-a-half day search. In April 1925, Cotten went with the division on a friendly visit to Australia, New Zealand, Tasmania, Samoa, Marquesas, and Galapagos, returning to the United States in November.

On 8 Jan. 1926, during the worst storm of the winter, the Richmond, with the Light Cruiser Division, sailed out of New York harbor en route to Guatemala for naval practice. Cotten, although already ill, personally took the flagship and the division through the channel and safely out to sea. Shortly after going below, he collapsed with a temperature of 106 degrees. The Richmond put in at the naval base in Norfolk, Va., where he was transferred to the naval hospital. He died of pneumonia shortly afterward and was buried in Arlington National Cemetery on 14 Jan. 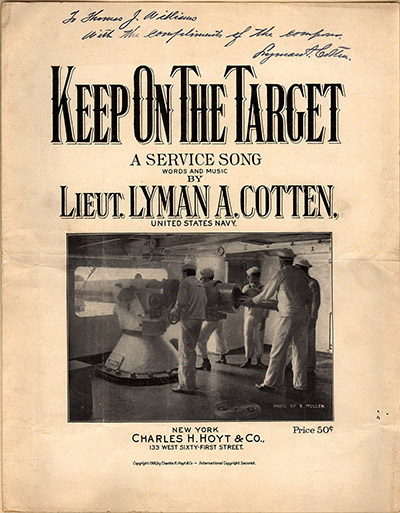 Cotten was a prolific writer and was the author of many articles, both professional and popular. "Safe Guarding the World Flyers" appeared in World's Work. He wrote several pieces for the United States Naval Institute Proceedings. In 1910 he won honorable mention from the institute for a study entitled "Naval Strategy of the Russo-Japanese War." In 1917 he won the gold medal, which carried with it life membership, for his study "Commerce Destroying in War." He was the author of many songs, still sung by Navy men, among them "Governor General or a Hobo," "Damn, Damn, Damn the Philippinos," "Philippinitis," "Keep on the Target," and the "Sub-Chaser Song."

In testimony to the esteem in which Cotten was held by his country, a destroyer built at the Federal Shipbuilding and Drydock Company of Kearney, N. J., and launched 12 June 1942, was named Cotten. (A World War II Liberty Ship, launched at Wilmington, was named Cotten in honor of Cotten's mother, first president of the North Carolina Federation of Women's Clubs.)

Cotten was married on 16 July 1908 to Elizabeth Brownrigg ("Bessie") Henderson, daughter of John Steele Henderson and his wife, Elizabeth Brownrigg Cain. The Cottens had two sons: Lyman Atkinson (b. 25 Apr. 1909) was a member of the faculty of the English department at The University of North Carolina, and John Henderson (b. 28 June 1913) was a captain in the U.S. Navy. Captain Cotten was survived by his parents; two brothers, Major Bruce of Baltimore, Md., and Preston S. of Boston, Mass.; and three sisters, Mrs. Russell B. Wiggin of Brookline, Mass., Mrs. D. B. Wesson of Springfield, Mass., and Mrs. T. B. Timberlake of Raleigh.