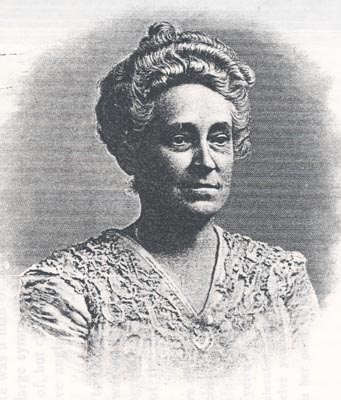 Susannah Sims and Thomas J. Southall. Of Irish descent, she had ancestors who were active in the early history of this country, including one who served in the Continental Congress and was a signer of the Declaration of Independence. As a young girl, Sallie Southall was sent to live with an uncle in Murfreesboro; there she attended public school and later Wesleyan Female College. She then went to Greensboro Female College, from which she was graduated in 1863. For the next two years, during the Civil War, she was a teen-age schoolteacher.

On 14 Mar. 1866, Sallie Southall married Robert Randolph Cotten, a Confederate veteran of Edgecombe County. They lived first in Tarboro, where he had a mercantile business; later they moved to Wilson. His desire was to be a planter, however, and it was not long before he purchased two plantations in Pitt County, Southwood and Cottendale. The family lived first at Southwood, where Cotten prospered as merchant and farmer. When his Wilson business needed his attention, he moved his family back to live in Wilson for ten years. A final move brought a return to Pitt County and Cottendale, where the Cottens spent the remaining years of their long and busy lives.

The first half of Mrs. Cotten's married life was largely domestic. Surrounded by children, she organized a school on the plantation and invited other neighborhood children to participate. She worked in the house and garden, visited friends, and was a leader in the Episcopal church. She found time also to read, think, and do some writing.

Her first opportunity for public service came in 1893, when Governor Elias Carr appointed her one of North Carolina's managers for the Chicago World's Fair. She traveled over most of the state gathering materials and relics to exhibit. She prepared a collection of books written by North Carolina women and presented them to the International Library of books written by women, on exhibit at the fair. This collection won for her a World's Fair medal and diploma. She served the state again on the board of managers at the Atlanta and Charleston expositions.

In her travels, Mrs. Cotten met women from all parts of the country who were active in the budding "woman movement." Long interested in the status of women, she returned home and began work immediately in encouraging women to organize themselves on the local level. As a result, many clubs came into being. A principal leader in the organization of the North Carolina Federation of Women's Clubs in 1902, she was the fifth president and an active member for twenty-five years. Her leadership led women through many movements with far-reaching results: they achieved a law permitting women to sit on school boards; they worked for local civic reform, libraries, education, child labor reform, and improvement in institutions of correction; and they raised money to establish an educational loan fund for girls, naming it the Sallie Southall Cotten Loan Fund. Mrs. Cotten composed the federation song in 1910 and wrote The History of the North Carolina Federation of Women's Clubs, 1901–1925 (1925). The federation made her honorary life president.

Mrs. Cotten was present at the organizational meeting of the National Congress of Mothers (later the Congress of Parents and Teachers) in Washington in 1897 and served from 1897 to 1906 as its recording secretary. She was active also in local clubs, the United Daughters of the Confederacy, the King's Daughters, the Pitt County Federation, and the End of the Century Book Club in Greenville.

In addition to her history of the Women's Clubs, Sallie Southall Cotten published a verse history of the Lost Colony, The White Doe , in 1901. She also wrote poetry and articles that appeared in the magazines of her day.

After her husband's death in 1928, Mrs. Cotten moved to Massachusetts and lived with a daughter. Her health was not good, but she made one final public appearance: she attended a gathering of women in Boston, where she was introduced as "the Julia Ward Howe of the South" and received a standing ovation. She died in Winchester, Mass., and was buried in the family plot in Greenville, N.C.

Two university dormitories are named for Mrs. Cotten, one at The University of North Carolina at Greensboro and the other at East Carolina University. In May of 1943 a Liberty Freighter was named for her and, at the launching ceremonies at Wilmington, was christened by her granddaughter.

Bruce Cotten, As We Were (1935); Sallie Southall Cotten, History of the North Carolina Federation of Women's Clubs (1925)