Part 2: The Rise of the North Carolina Textile Industry 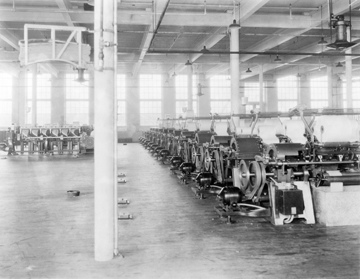 North Carolina possessed many resources, both natural and economic, that made the state an ideal environment for a booming textile industry. These resources included a mild climate, plenty of accessible waterpower, a wealth of raw materials in the form of cotton and lumber, and an abundance of cheap labor. During the first century of textile manufacturing, from the 1820s to the 1920s, North Carolina's textile mills produced a lower-grade yarn and cloth consumed by a local market. Before the Civil War, mills sold their yarns to nearby farm families who operated carding machines, spinning wheels, and hand looms to make their own clothes. A superintendent of the Rocky Mount Mills recalled that in the 1850s he sold most of the coarse yarn produced at the mill "in five pound bundles for the country trade-this was woven by country women on hand looms." He sold surplus yarn for "coarse filling for the Philadelphia market."

A handful of products from North Carolina achieved recognition beyond the communities in which they were manufactured. In Randolph County, Henry Elliott stamped the label "Cedar Falls" on bundles of yarn produced at his mill along the Deep River, and the Salem jeans produced by Francis and Henry Fries in Forsyth County became well known as a durable product for "negro clothing" on southern plantations. The best-known textile product in the early decades of the industry were the Alamance Plaids produced by Edwin M. Holt, who in 1853 had learned of a dyeing process that enabled him to produce the South's first colored cloth on a power loom.

The Civil War stimulated a major conversion of the textile industry from yarn spinning to the manufacture of material for the war effort. The Confederate government entered into contracts with every mill in North Carolina for coats, pants, and other articles of clothing as well as sacks and bags. The two regiments from Salem wore woolen Salem jeans into battle. John Motley Morehead's mill in Leaksville (Rockingham County) furnished blankets, while the Cedar Falls mill became the leading supplier of shirts and underwear by war's end. During the last months of the conflict, the Confederacy drew its entire supply of textile goods from North Carolina.

To assist the former Confederacy's crippled economy, the U.S. Congress passed a law exempting federal taxes on cotton textiles manufactured in the same district where the cotton was grown. New England textile manufacturers closed their mills and moved south to exploit this competitive edge as well as the cheaper labor. In the late nineteenth and early twentieth centuries, North Carolina mills resumed their practice of producing yarn for local consumption and selling the surplus to mills in northern cities, especially New York and Philadelphia. Although a few mills in North Carolina wove their own cloth in addition to making yarn, the national reputation of the state's textile industry remained tied to the production of coarse yarns. North Carolina's textile manufacturers produced lower-grade yarns at a relatively low cost with inexpensive equipment and a largely unskilled labor force. Those mills with weaving departments produced heavy woven goods such as unbleached cloth, plaids, ginghams, denims, toweling, socks, flannel for industrial fabrics, and clothing for working people. Many of the state's most prominent manufacturers of woven goods, such as Cannon Mills and Cone Mills, began during these later decades of the nineteenth century.

An increased demand for American-made textile goods during the World War I era, particularly for military uniforms, blankets, and other apparel, stimulated the North Carolina textile industry and resulted in a large increase in the number of textile mills in the state. By 1921 North Carolina mills were producing $191 million worth of textiles annually, more than twice the production of 1914. This growth continued after the war, and by 1923 North Carolina had overtaken Massachusetts as the leading textile-producing state in the nation (by value of product).