"Walking Out: The Great Textile Strike of 1934" 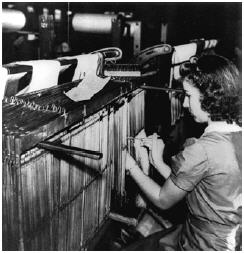 In the 1920s, North Carolina ranked as the largest producer of textiles in the United States. Throughout the South, low wages and good access to electricity had led companies to build a large number of factories (or mills) that made yarn, wove fabric, and spun cotton. Thousands of Tar Heels worked in mills, especially in the Piedmont region. Most of these workers faced long hours and low wages, and many felt unhappy about their working conditions. Others were too scared of losing their jobs to complain. By the early 1930s, nearly one out of four North Carolinians had no job. As many people struggled to keep their homes and find enough to eat, textile workers were pulling together, hoping that President Franklin Delano Roosevelt would find a way to help them.

On Saturday, September 1, 1934, in its afternoon edition, the Gastonia Daily Gazette newspaper made a special request to Gaston County citizens to “use discretion.” The request read, “The Gazette would like to make an earnest plea to all concerned in the proposed textile strike that we exercise caution and care in this county.” It continued, “We do not want a repetition of the 1929 troubles. Goodness knows, this county and city received too much unfavorable publicity from that summer. We have not been able to live it down for five years.”

Those “troubles” mentioned in the newspaper involved a strike in June 1929 at the Loray mill in Gastonia. During a strike, employees temporarily stop working, or walk off their jobs, to protest or bring attention to work-related demands. In 1929 Loray workers grew so unhappy that they organized a strike to demand more pay, a 40-hour workweek, and better working conditions. Violence broke out between those who supported the strike and those who did not. On September 14, 1929, a carload of armed men attacked a group of strikers traveling to a rally. One of the strike organizers, Ella May Wiggins, was killed.

Even at that time, strikes were not uncommon in southern textile mills. Most workers labored 55 to 60 hours, six days a week, and earned less than $10 a week in difficult environments. The machines that spun yarn, wove fabric, and provided materials for the clothing industry were loud and dangerous to work around. When workers inhaled small pieces of fabric that filled the air and stuck to their clothes, they could suffer breathing problems and lung damage. Whole families, including children, worked in the mills. This aspect changed by the 1930s. The “stretch-out” and heavier work demands led to mostly older teens and adults working.

The stretch-out caused hard feelings between mill owners and workers. In the late 1800s and early 1900s, mill owners had begun trying something called “scientific management.” The idea got its start in the late 1890s with an engineer named Frederick Winslow Taylor, and later, the husband and wife team of Frank B. and Lilian M. Gilbreth. Taylor claimed that he had figured out how companies could save huge sums of money by carefully observing workers and revising the way they did their jobs. He said his methods would lead to the same number of workers doing more work in less time.

The theory behind Taylor’s claim was that making workers more efficient would lead to shorter workdays and higher wages for employees, as well as higher profits for their employers. In reality, scientific management gave mill owners more ways to reduce expenses by cutting jobs and having fewer employees do more work. Mill owners replaced people with newer and more advanced machines, requiring remaining workers to cover or operate more machinery. Wages did not go up, and hours did not go down. The mill workers called this new management technique the “stretch-out” since they felt it stretched them to their limits. They did not like “outsiders” coming to the mills, timing their every move (including breaks) with stopwatches. They felt that they were being treated like machines themselves.

When President Roosevelt took office in 1933, the country was struggling with the Great Depression. Textile workers across the United States hoped for an administration that would help put people back to work and protect their jobs from further cuts. They also hoped that the new government would help workers organize into groups, or unions. Unions could negotiate with mill owners as a group to resolve complaints and issues like the dreaded stretch-out.

On June 16, 1933, Roosevelt signed the National Industrial Recovery Act (NIRA) into law. The law was designed to help American companies be more competitive, to provide new jobs, and to protect existing jobs. The NIRA guaranteed the right to join unions and engage in collective bargaining. It also required companies to set limits on hours worked each day (eight) and determine the lowest starting wage paid per week (around $12 in textile mills). Although workers, employers, and unions praised the new law at first, it soon became clear that it benefited mill owners in several ways. Workers and union representatives quickly became frustrated with layers of time-consuming and difficult paperwork and procedures required under the new law.

Despite these difficulties, under the protection of the new law, union membership skyrocketed. Workers established local chapters of a union where they lived—holding meetings, electing officers, and discussing important issues. Many new locals sprang up across the South, in places like Charlotte and Gastonia.

That spring, tensions between mill owners and workers ran high. Many owners threatened workers who joined unions and fired union representatives and organizers. (Even before 1934, workers who joined unions or participated in strikes sometimes got fired and forced out of their mill village homes.) Wages remained low, the stretch-out was still common, and some mills refused to negotiate with or recognize any union representation. In July 1934 frustrated workers in Alabama became unwilling to wait for the national United Textile Workers (UTW) union to call a strike. They staged a walkout. Francis Gorman, the UTW’s vice president, soon called for a nationwide strike to start on September 1.

On Monday, September 3, textile workers in Gastonia held the city’s first Labor Day Parade through the center of town. Newspapers reported that 10,000 people participated. During the next week, thousands of union members traveled throughout the South in cars and trucks to organize workers and help close down mills. People called these fleets of union supporters “flying squadrons.” By week’s end, 300,000 to 500,000 textile workers from New England to the Deep South had gone on strike. Most strikers came from the cotton mills of North and South Carolina. All 104 mills in Gaston County had closed by September 7.

On Saturday, September 8, the headline of the Gastonia Daily Gazette called out, “Union Leaders Dare Mill Owners to Start Monday.” However, mill owners—especially those in the South—had learned their lessons from prior strikes. Many hired private guards and got help from state and local law enforcement agencies, and even National Guard members. Many sheriffs quickly added large numbers of additional “deputies,” whose only qualification was carrying a gun. This protection of the mills made it possible for some workers to cross the strike’s picket lines and keep the mills open. It also increased the chance for violence. In Kannapolis, where the Cannon mills were located, 1,200 strikers confronted two military companies and an additional 99 sheriff’s “deputies” armed with shotguns.

Although no one died in North Carolina, on September 6, six picketers had been shot to death and more than twenty others wounded in Honea Path, South Carolina. Rhode Island and Georgia officials also reported deaths. Georgia governor Eugene Talmadge grew so angry that he declared martial law, ordering 4,000 National Guardsmen to help maintain order and prevent picketing.

The growing violence forced President Roosevelt to get involved. He put together a small board, chaired by John Winant (former governor of New Hampshire), to try to end the strike by resolving differences between the union and the mills. On September 18, the Winant board released its recommendations. This report, although showing some sympathy for the strikers, made no recommendations that would have raised wages, improved working conditions, or changed the stretch-out. It marked a clear victory for the mill owners. UTW leaders, unwilling to accept defeat, called the strike a success. They ordered union members back to work. Strikers in the North—where state laws protecting workers were stronger, and unions were better organized and more powerful—did see some improvements. Workers in the South faced a bitter and unfriendly return.

The strike of 1934 had offered southern textile workers the short-lived hope of organized bargaining with their employers and national recognition for their struggles. Many workers felt that—between the hollow promises they received from the federal government and the lack of support from the textile union—union membership was not that important. Textile unions would never recover from such a devastating defeat.

Today the textile industry that once held such importance in North Carolina is nearly gone. Many of the same struggles and issues that faced textile workers in the 1930s continue. Only now, the challenges arise in textile mills in faraway places like China, Honduras, Cambodia, Laos, and Sri Lanka.

At the time of this article’s publication B. J. Davis was the chief of the Education Section at the North Carolina Museum of History.