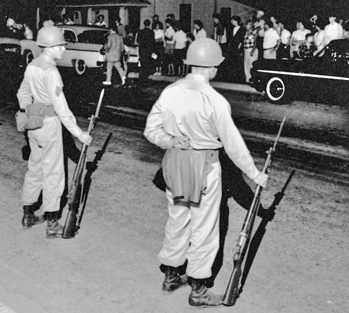 n 1895, with the financial assistance of local investors, brothers David Y. and John D. Cooper organized the Henderson Cotton Mill on the north side of Henderson for the production of sheeting. The mill began operations the next year. Its profitability led the Coopers and others to develop a second factory, the Harriet Mill, on the south side of Henderson. This mill, which started up in 1901, spun coarse yarns. In 1909 and 1913 the company opened two new plants at the Harriet Mill site. The Harriet and Henderson cotton mills became major producers of yarns.

Following a national trend, the directors modernized the mills in the late 1930s to increase their efficiency and competitiveness. These efforts caused dissatisfaction among the employees, who in 1943 voted to join the Textile Workers Union of America (TWUA)-a rare occurrence in the South. Unionization resulted in significant improvements in the lives of textile workers in Henderson. However, further modernization in the early 1950s, increased workloads to offset the effects of economic recession, and management's refusal in 1958 to agree to a contract that required arbitration of grievances precipitated a strike at the mills.

Members of TWUA Locals 578 and 584 met on 16 Nov. 1958 and voted to strike. The strikers received strong financial support from the union. Many of Henderson's business and civic leaders viewed the situation as a detriment to the town's economic progress. The mills remained closed until February 1959, when the company decided to operate with nonunion workers. Because the economy was poor and unemployment high, management was able to hire new workers. When this occurred, Henderson experienced incidents of vandalism and rock throwing, shootings, and bombings. At the request of local law enforcement officials, Governor Luther H. Hodges, himself a former textile executive, called in the North Carolina State Highway Patrol to escort workers across picket lines and to maintain law and order. He also authorized the State Bureau of Investigation to investigate the violence.

Hodges met with union and company officials, urging them to agree to a new contract. This was accomplished on 17 Apr. 1959. The agreement stipulated that arbitration would be contingent upon mutual consent of labor and management. The company agreed that workers could strike when the company refused to allow arbitration of disputes. Strikebreakers would retain all first-shift jobs, but most remaining positions would be given to strikers. Soon the strikers learned that management had held only 30 positions for the hundreds of workers who were still on strike; the rest were given to strikebreakers who would work on a second shift. Despite the governor's appeals to mill president John D. Cooper, the company soon hired enough new employees to run a third shift at its plants. Owing to this act of bad faith, the agreement unraveled and more violence erupted.

Bowing to pressure from those who disagreed with his use of the Highway Patrol in Henderson, Hodges ordered the National Guard to take its place at the mills in May 1959. More than 60 union members or sympathizers, including Boyd E. Payton, who had represented the TWUA in Henderson, were tried and convicted in superior court for various acts of violence. (Payton was later paroled and pardoned by Governor Terry Sanford.) Although the union had failed to achieve its goal, it did not officially end the strike until 1 June 1961, after spending more than $1 million to support the strikers. Most of them never worked in the Harriet and Henderson cotton mills again. The divisions in Henderson caused by the labor dispute continued for many years.