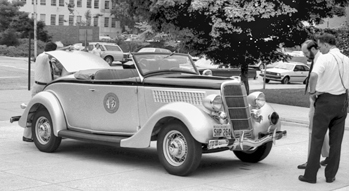 The enormous growth of motorized traffic after World War I created a problem for law enforcement officials in North Carolina. Although more than 100,000 automobiles traveled the expanding highway system, no state agency could enforce traffic laws on intrastate roads; only county and local police patrolled these roads, and then only infrequently. Finally, in 1929 the General Assembly authorized the creation of the North Carolina State Highway Patrol and a patrol training school at Camp Glenn, near Morehead City. Initially, the Highway Patrol, with headquarters in Raleigh and district offices throughout the state, consisted of a captain, 9 lieutenants, and 27 officers; by 1931 the force had grown to 67 officers. Patrolmen pursued offenders on Harley-Davidson motorcycles until 1937, when they were assigned their own cars.

Over the years the Highway Patrol has undergone many administrative changes as the population and highway system has grown, but its mission continues to be making North Carolina highways as safe as possible. The modern patrol is divided into eight troops that cover the state, with headquarters at Raleigh, Greenville, Fayetteville, Greensboro, Salisbury, Newton, Asheville, and Monroe. In 2004, 1,445 troopers and 365 motor carrier officers monitored commercial vehicles; they made 26,005 arrests for drunk driving, investigated 1,119 fatal collisions, and seized illegal drugs worth $10 million. North Carolina's state troopers also promote various initiatives for child safety and seat belt use and oversee evacuations due to major emergencies, such as hurricanes and chemical spills.