Childhood in the Textile Mill Villages 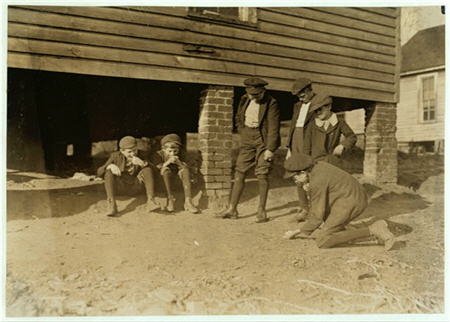 More than thirty women and men discussed their lives in oral history interviews and talked especially about their childhood before World War I in Carrboro, North Carolina.

From the ages of eight and nine years, young people worked part-time in the mill.  Once they reached the age of twelve they worked full-time, and they all had chores at home. Time for play still could be squeezed into a few hours on Saturday and Sunday afternoons.

Mill houses had only three or four rooms with many family members and boarders crowded together. The woods at the edge of the backyard, however, offered plenty of space to play and natural materials to make toys. Small children used huge gold and crimson oak leaves to fashion hats. They broke off broom straws (these looked like long toothpicks) to use as pins to hold the leaves together and to fasten daisies on top. They gathered green moss and covered large rocks to make “upholstered” furniture. Corncobs, dressed in scraps of cloth, became dolls. Crates or boxes from the store were transformed into wagons that carried corncob families to visit other families. Sometimes there was a wedding among the corncob families in the woods, sometimes a funeral. One of the children preached, and all cried real tears.

Reaching beyond their experiences in the mill village, the children also imagined the American Indians who had lived there hundreds of years before them. Not only did they pretend they were Indians, but they also searched for Indian artifacts. They always wondered if a treasure lay just beyond their fingers. One woman recalled a special, enchanted afternoon.

... So one day we wandered off just a little farther from home. There was quite a crowd of us. And we just kept a-walking, and kept a-walking, and we came upon something that was buried in the ground. And we could tell from the way it... was sticking up—that it was a handle of something, or maybe a handle to a pitcher, or something. Just the way it was sticking up. And it was a kind of copper color. And I won’t ever forget it! We was so thrilled we didn’t know what to do. And we all—you know how a pack of children will say—we figured it was Indian, something that the Indians had buried back there. Well, instead of us marking the place where it was, we all run home to tell our parents about finding it. And they went back with us and we never did find it. We never did find out. And I’ve often wondered about it, after I grew up.

Sometimes, when the adults were busy elsewhere, children jumped up and down on the beds. Then they dressed in the grown-ups’ clothes and pretended to be grown themselves. Often the children ran out to the edge of the woods, picked blackberries, and had a feast. At hog-killing time their fathers would blow up the hog bladders, and the children would use these as balloons.

Older boys and girls also devised their own games. The favorite sports for the boys were baseball and football. They had no money to buy equipment. A man who later made a fortune in the construction business described how they managed to play.

We played football on Sunday... on the Lily Meadow. Take one of our caps and tie a ear of corn up in it and throw it down to the other end, and when you got back in the honeysuckle that was on the other end, it was a touchdown. It was a rough game. One boy who came out to play learned how tough it could be. Well, he said he was going to make a touchdown or die, and we pulled his hair loose from his head and tore his nose up, and he said he never expected to play any more football.

Boys also went swimming in the creek, hunting, and fishing. A dangerous thrill they discovered involved jumping on a boxcar as the train pulled out of the Carrboro station. The engineer found them and ended that contest quickly. A longer-lasting adventure was the secret cave they discovered and fixed up as a clubhouse. They covered the entrance with timber and trash. An old barrel, placed to one side, was the entryway. A short crawl though the barrel brought them to the cave. Inside the club they played the forbidden game—poker.

A swimming pool was built in Carrboro, and small children, adolescent boys, and men could go swimming for a nickel. Girls and women could not go in the pool. Girls were watched more carefully than boys and usually stayed close to their homes. Their favorite recreation was to gather in somebody’s house for a party. In the summer girls would make ice cream. Other seasons they would have different refreshments and games, as one elderly woman recalled.

Somebody’d have a party every once in a while. We had a good time. I always loved to play checkers. And rook. We’d meet at each other’s homes and play rook. And if it met with me, we’d serve something. Wherever, they’d serve... sandwiches, drinks, nuts, and homemade fudge.

Since television did not exist then and radios were crude, homemade sets that crackled, people entertained their families and friends by telling stories. In the summertime boys and girls would sit on the porch steps late at night, telling ghost stories in the dark. People believed that it was possible, in times of trouble, to see a living person’s spirit coming down the road before the person actually was visible. Many stories had this theme. Often in these stories the ghost people or animals appeared as messengers to the living to warn them that something was going to happen. The following story, long remembered, is one they puzzled over.

But I know my aunt, who used to live out there... was telling about one night she was going home. People used to travel at night. You know, they thought nothing about it. She was just going through the woods; and beside the path, she said, was a little lamb, just lying there. And she wondered where the little lamb came from, because nobody around had sheep. And she said she thought, “Well, that’s odd.” But she went on home. And the next day she went back to see about it, and there was no lamb. There was no sign of it ever having been there or anything. And she thought it was a ghost.

Other stories concerned family history, often Civil War experiences, that parents, grandparents, aunts, and uncles told. One woman remembered that her father often talked to her about the battle of Gettysburg, and she told his story to her friends.

My daddy served in the war for four years. And he got shot through both hips... And I know he said he stayed in a little old log cabin they had for a hospital. And they put a bucket of water over him, and drove a little tiny nail hole so it would just drip... And that water, that’s all he had done to him, was that water dripping in that hole, that bullet hole, till the fire got out of it... He said that when that water would give out up there, he’d scream like murder... He still stayed on in the service, till it was over with.

These family oral histories reveal the demand for family loyalty, hard work, endurance, and thrift. The programs young people participated in at the Methodist or Baptist churches, the only two churches in Carrboro, also emphasized moral behavior and family loyalty. But church was also a means of socializing and having fun, as shown in an exchange between the preacher and one youth.

[W]e used to have children’s programs, you know, at night? And Preacher Shelton got up, talking about the program and complimented it, and said how wonderful it is to be a child. And he said what we all would have missed had we never been children. And thinking of Adam, he said, “Can any of you wonderful boys and girls tell me a man that was never a boy?” Roy held up his hand—he was my cousin—and Mr. Shelton says, “All right, Roy, you tell us.” Roy said (pointing to the child beside him), “Louise Mann.” Oh, that was so funny! Actually, everybody was laughing. Preacher Shelton said that knocked his speech out of him.

The churches presented programs that gave young people the opportunity to learn poems, to act, and to gain experience in public speaking. Afterward the walk home allowed sweethearts to be together.

A lot of hard work faced children in the mill, and chores awaited them at home.  Restrictions existed, especially on girls. But these men and women in their early years used imagination to create toys, games, secret places, stories, and memories that have lasted them a lifetime.

At the time of this article’s publication, Valerie Quinney was an instructor and researcher in oral history at Northern Illinois University in DeKalb, Illinois.