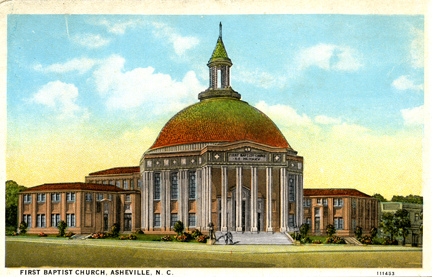 Baptists, with a theology rooted in the Reformation, represent the largest Protestant denomination in North Carolina among both blacks and whites. Baptists are unique among Christian sects in their rejection of infant baptism (waiting instead until individuals are old enough to choose for themselves) and their requiring of full immersion as the method of baptism. They also refute any religious or moral authority other than that of the Bible as interpreted by individual believers. Baptists also believe a true church can be formed only by a congregation of believing, baptized members who together are the sole source of authority for that congregation.

As a result of this individualistic approach to their faith, Baptists historically have developed into a variety of sects, each espousing a theology that is unique in some way. They are often connected to each other through Baptist associations, which are meetings of delegates from various churches that have agreed to cooperate to achieve certain designated goals. Several Baptist groups have played significant roles in North Carolina's religious history, including the General Baptists, the Free Will Baptists, the Particular Baptists, and the Separate Baptists.

General Baptists are the oldest Baptist group that originated in England. They were so named because of their Arminian belief that the death of Christ was a "general atonement," available to all humans and not just God's "elect." They were tolerant not only of differing beliefs within a congregation but of members whose baptism might have come before an experience of grace. The General Baptist tradition in North Carolina began in the 1720s with the work of Paul Palmer, who established Baptist churches based on the theology of free will, as opposed to the doctrine of predestination advocated by more Calvinistic Baptists at the time.

Particular Baptists emerged during the middle of the eighteenth century, insisting on the concept that salvation was given by God only to those who were chosen and that these individuals were predetermined, leaving no room for individual choice by the believer. For them a church was a closely organized and disciplined congregation of believers who had agreed to accept these concepts as defined in a church covenant. They also insisted that an experience of grace-difficult to define but implying that the believer had been touched by God and was sure of his or her salvation-precede baptism. A particularly antimissionary group of these Baptists became known as Primitive Baptists and dominated Baptist affairs in eastern North Carolina during much of the nineteenth century.

Separate Baptists and their closely related brethren, Missionary Baptists, are rooted in the First Great Awakening of the mid-eighteenth century. Their enthusiasm for the emotional revivalism and missionary activity of the era separated them from other Baptists, including the General and Particular Baptists. Their brand of faith tended to thrive in rural areas of North Carolina. Missionary Baptists responded to the Great Awakening by promoting an increase in missionary work, not only at home but also in many other countries. In doing so, they parted company with the Particular Baptists and went on to win an increasing number of members and become the dominant body of the so-called Regular Baptists, a term used to designate mainstream Baptists. Over time, most Particular, Missionary, and Separate Baptists also became part of the mainstream Baptists.

The Baptist State Convention of North Carolina, formed in 1830, is the largest organization of Baptists in the state. The denomination's activity in the state had grown since the organization of its first association, the Sandy Creek Baptist Association, by Shubal Stearns in 1758. The move toward formal organization as a state Baptist body was gradual. Early attempts were made to provide a permanent apparatus for the support of home and foreign missions by North Carolina Baptists. Each attempt failed, however, and it was determined that a better plan was needed to solicit support from all North Carolina Baptists.

In 1826 such a proposal was made by Martin Ross of the Chowan Association. He died before his proposal came to fruition, but his suggestion was not forgotten. On 26 Mar. 1830 the newly formed North Carolina Baptist Benevolent Society unanimously adopted a resolution that the society be transformed into a state convention. Thomas Meredith presented a draft of a constitution, and it was adopted as he read it, article by article. The objective of the Baptist State Convention was to aid in providing ministerial education and both domestic and foreign mission support.

By the early 2000s, approximately 3,500 churches were affiliated with the Baptist State Convention of North Carolina, which was headquartered in Cary. The convention also supported six educational institutions: Mars Hill College, Gardner-Webb University, Campbell University, Chowan College, Wingate College, and Fruitland Baptist Bible Institute. Early in 1997, Meredith College severed its relationship with the convention rather than continue to allow it even partial control over the college's direction.

The Baptist State Convention of North Carolina supports a weekly periodical, the Biblical Recorder, which is published in Raleigh and has provided news and information to North Carolina Baptists since 1835-the year it was founded by Baptist leader Thomas Meredith. Since its founding, the paper has been published continuously except for two brief interruptions, one in the 1840s and the other during the Civil War. The Biblical Recorder continues to inform Baptists in the state about issues of concern to the denomination as well as publicize the resource needs of, and opportunities in, missionary work. During the last years of the twentieth century and the first years of the twenty-first, the Biblical Recorder also voiced opposition to efforts by some members of the North Carolina General Assembly to liberalize the state's liquor and gambling laws.

Many North Carolina Baptists consider themselves part of the wider group known as Southern Baptists, separated from their northern counterparts since the mid-1800s. Much controversy has surrounded the relationship between the Baptist State Convention of North Carolina and the Southern Baptist Convention, which was founded in 1845 and has maintained a theologically conservative stance since the late 1970s. Southeastern Baptist Theological Seminary in Wake Forest became a battleground in the mid-1980s between conservatives (often fundamentalists) and moderates, frustrating many North Carolina Baptists. The state convention, however, has tried to maintain a balance between conservatives and moderates, continuing to focus on the common ground of missionary and philanthropic work.

How are you, today

How are you, today