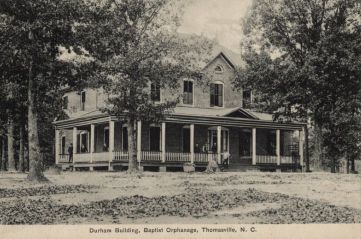 Baptist Children's Homes of North Carolina, Inc., founded in 1885, is one of the largest residential child care facilities in the South. The idea to establish an orphanage was first brought before the North Carolina Baptist State Convention in 1884 but was rejected primarily because of the cost of such an enterprise, the existence of the Oxford Masonic Orphanage (which Baptists had helped organize), and the tendency among many North Carolina Baptists to reject any type of missionary efforts beyond the local church. Within a year, however, supporters of the idea had appointed John Haymes Mills as the first general superintendent and commissioned him with the task of raising money and finding a site. A site was selected in Thomasville, and the first resident of the Baptist Orphanage was admitted in 1885.

Baptist Children's Homes of North Carolina, Inc., became an important ministry of the Baptist denomination, receiving a great deal of support from the North Carolina Baptist State Convention. In the early 2000s, the organization had 12 facilities throughout the state, aiding more than 1,200 children and their families through residential group care, crisis emergency care, maternity services for unmarried women, and other support programs.