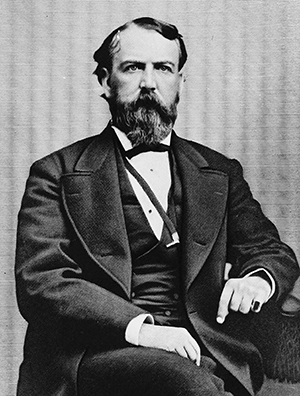 Rufus Lenoir Patterson, manufacturer and entrepreneur, was a member of a distinguished North Carolina family of Scotch-Irish ancestry. Born at Palmyra in the Happy Valley of the Yadkin in Caldwell County, he was the oldest son of Samuel Finley Patterson, a wealthy planter and prominent North Carolina politician. His mother, Phebe Caroline Jones Patterson, was the daughter of Edmund Jones and the sister of Edmund W. Jones, both respected politicians in Wilkes and later Caldwell County. Rufus's brother, Samuel Ledgerwood Patterson, was a planter and politician who served his state for a time as commissioner of agriculture.

During his childhood Rufus Patterson lived both on the Palmyra plantation and in Raleigh, where his father had to take up residence as state treasurer and later as president of the Raleigh and Gaston Railroad Company. He attended the Raleigh Academy and then the school of the Reverend T. S. W. Mott, an Episcopal minister, in Caldwell County. At The University of North Carolina, he was a popular student, winning election to several offices including the marshalship. After graduating in 1851, he studied law under John A. Gilmer, although he never practiced that profession.

In 1852 Patterson married Marie Louise Morehead, daughter of Governor John M. Morehead. After spending a few months at Palmyra, Rufus decided that he preferred business to the agricultural world and moved to Greensboro to study banking under his wife's uncle, Jesse H. Lindsay. Soon, with the financial aid of his father-in-law, he went into business for himself, becoming owner and manager of a cotton, flour, and paper mill in Salem. He also became active in county politics, serving as chairman of the Forsyth County Court from 1855 to 1860 and as mayor of Salem for several years.

A Jacksonian Democrat before the Civil War, Patterson became disillusioned with his party after the 1860 convention in Charleston. As a delegate, he discouraged secession but to no avail. He finally decided to vote for John Bell, hoping to establish "a Union sentiment in North Carolina." As he explained in a letter to Colonel I. W. Alspaugh on 3 Oct. 1860: "I am a Union man. I am unwilling to see our country ruined because a Bl'k Rep. President is elected. . . . I am for giving him a trial. If he commits no overt act which would amount to a clear, wilful & palpable violation of our rights, I am for submitting to his government." Patterson believed that the issue of the expansion of slavery into the territories was a mere abstraction, not worth the cost of a civil war. However, in 1861, as a delegate to the North Carolina Constitutional Convention, he voted for and signed the state's ordinance of secession.

In 1862, after the death of his wife, Patterson sold his Salem mills and returned to Caldwell County to manage his father's cotton factory in the town of Patterson. He remained at this job until the business was burned by Union troops in 1865. During the war, though not active in politics, he supported the original secessionists and criticized the Conservative party headed by Governor Zebulon Vance. In 1862, for example, he praised the Southern cause and Southern victories and denounced the conservatives, whom he accused of "crying out . . . for the old Union that Lincoln might confiscate the property of the rich & give it to the loyal poor." By May 1865, however, he was attacking the Jefferson Davis government as "the most corrupt despotism that ever tried to exist"; he proclaimed his "thanks . . . to a merciful and just Providence" that that government had "ceased for all time." As a delegate to the 1865 constitutional convention, he was a member of the Conservative party and a staunch supporter of Jonathan Worth, an old-line Whig and longtime ally of Vance. This 1865 office was the last one Patterson held.

In 1864 he married Mary E. Fries, the daughter of Francis Fries, a successful Salem manufacturer and merchant who pioneered in textiles and machinery development. After the war Patterson returned to Salem, entering into business with H. W. Fries. At the time of his death, Patterson, along with Fries, owned several cotton and paper mills and a general merchandising firm. Patterson also had an interest in railroad development, which is probably why he became a moderate Republican. He actively supported internal improvements, especially the Western and Northwestern North Carolina railroads. He was a director of both lines and treasurer of the latter, as well as a director of the North Carolina Railroad Company. In addition, Patterson took a lively interest in his alma mater, serving as a trustee from 1874 and contributing a good deal of money to its postwar construction projects.

Patterson raised a large and distinguished family. He had five children by his first wife: the eldest died in infancy, Jesse Lindsay became a prominent lawyer, Carrier F. married Judge A. L. Coble, Lettie W. was wed to Colonel Frank H. Fries, and Louis Morehead died in adolescence. He and his second wife had six children: Frank F., a newspaperman for the Baltimore Sun ; Samuel F., a Baltimore cotton manufacturer; Andrew H., a professor of physics at the University of Georgia; Rufus L., Jr., an inventor and businessman based in New York City; John L., a cotton manufacturer in Roanoke Rapids; and Edmond V., who was in the cotton commission business in New York City. His fourth son from his second marriage was the most outstanding. Rufus Lenoir Patterson founded the American Machine and Foundry Company at the turn of the century and with his invention of a machine to weigh, pack, stamp, and label smoking tobacco, he built the company into a million-dollar business. He then merged with and became a vice-president in charge of manufacturing for the American Tobacco Company.

Although Patterson was reared in the Episcopal church, he was received as a full member of the Moravian church by confirmation on 16 June 1878. On his death, services were held at the Moravian church and burial was in the family burying grounds in the Salem Woodland Cemetery beside the remains of his first wife. Rufus Patterson was said to be "strikingly handsome," a description confirmed by his portrait in Samuel A. Ashe's Biographical History.