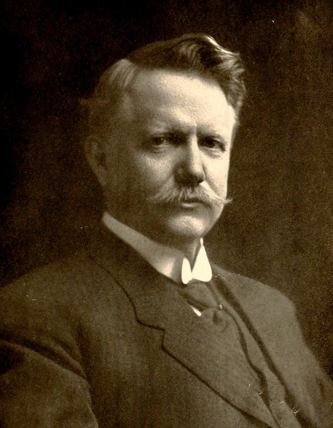 Francis Henry Fries, manufacturer, banker, and railroader, was born in Salem, the son of Francis Levin and Lisetta Maria Vogler Fries. His mother was the granddaughter of the silversmith, John Vogler, a prominent figure in early Salem; his father was active in community affairs and politics, serving in the General Assembly in 1858–59. Young Fries attended the Salem Boys School and then was graduated from Davidson College in 1874. His career resembled that of his father, who founded the first successful textile mill in Salem. The Fries Manufacturing Company was built in 1839, became the F and H Fries Manufacturing Company in 1846, and was operated until 1928. It produced the famous "Salem Jeans." Fries, like his brothers, became a partner in the firm at age twenty-one; he was superintendent until 1887. In 1881 he built Arista Mills, the first mill in North Carolina to have electric lights. Shortly afterward, he started the Indera Mills.

In 1887, at the urging of R. J. Reynolds and others, Fries assumed the task of building a 122-mile railroad to cross the mountains and connect Winston and Salem to Roanoke. Completed in 1891 at a cost of $2 million, the Roanoke and Southern Railway, which Fries served at times as president and general manager, became part of the Norfolk and Western rail system in 1892. Plans to build another line from Winston and Salem to Wadesboro in order to connect with the Atlantic Coastline Railroad were postponed because of the depression of the 1890s. Later, in 1909–10, Fries helped his brother, Henry Elias Fries, then president of the Winston-Salem Southbound Railroad, complete the line to Wadesboro. The purpose of these rail lines was to prevent Winston and Salem from being commercially isolated.

He also stayed heavily involved in the textile industry. In addition to his responsibilities at Arista Mills and Indera Mills, he founded Mayo Mills and the town of Mayodan in 1896, the Avalon Mills near Mayodan in 1899, and the Washington Mills at Fries, Va., in 1901. In 1923, these last three mills were consolidated as the Washington Mills at Fries, Va. Fries was president of the mills he organized as well as vice-president and director of the Oakdale Mills in Jamestown, president of the Brown and Williamson Tobacco Company, and a director of several other companies.

A Democrat, Fries limited his political participation to serving on the staff of Governor Alfred M. Scales (1885–89), acquiring the title "Colonel," which he used thereafter as a convenient way to distinguish his name from that of his father. In 1904, he was elected president of the North Carolina Bankers Association, and he headed the trust section of the American Bankers Association. During World War I, he was a director of War Savings in North Carolina. Active in the Moravian church and his community, Fries was a Sunday school superintendent for twenty-five years and a trustee of Salem Academy and College. He initiated the Winston-Salem Foundation, which in 1970 had assets of $25 million.

On 23 Nov. 1881 he married Letitia Walker Patterson, granddaughter of Governor John Motley Morehead and daughter of a leading North Carolina textile family; she died in 1884. Their only child, Louis Morehead, died in 1882. Fries's second wife, whom he married on 19 Aug. 1886, was Pauline deSchweinitz, daughter of a bishop of the Moravian church. Their only child, Rosa Eleanor, married Richard Furman Willingham. After his death in Winston-Salem, Fries was buried in Salem Cemetery.

In this article, it is stated

In this article, it is stated that in 1923 these three mills were consolidated as Washington Mills in Fries, Va. The fact is on June 15, 1911 a fire started in Avalon Mills and it burnt to the ground. After careful consideration of rebuilding the mill, it was decided that it would not be rebuilt, the community of Avalon was largely moved on logs 2 miles downriver and consolidated into Mayodan. The Mayo Mills absorbed the workers and it was expanded. Therefore, the article is incorrect when it states that the three mills were consolidated into Washington Mills. This is well documented with even pictures of the aftermath, of the buildings while being moved. You can find information of this at this link. http://electricgypsybbs.com/otherstuff/avalon/story15.php