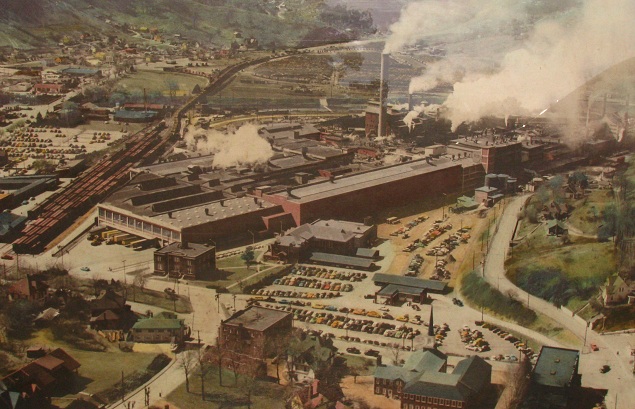 The earliest North Carolina paper mill, erected in 1777 in Orange County by John Hulgan, was equipped with a water-powered stamper to pound rags to fiber. From 1777 to 1896, there were ten water-powered paper mills (many of them under a succession of owners) at work at various times in six North Carolina counties, all of which made paper from rags and cotton waste. Besides the original mill in Orange County, there was the Buffalo Paper Mill, in operation in Cleveland County from 1851 to 1883. Cumberland County had two mills: David Anderson's mill on Cross Creek (1808-20s) and David Murphy's mill on Rockfish Creek (1850-65). Forsyth County's only paper mill was built by Gottlieb Shober in 1790, when the area was still part of Stokes County, and lasted until 1873. Lincoln County's two paper mills were the Long Shoals Paper Mill (1832-83) and the Lincolnton Paper Mill (1856-91). Wake County had three paper mills: Raleigh Paper Mill (1808-65), Neuse Manufacturing Company (1843-65), and a mill at the falls of Neuse River (1854-96). The primary products of these mills were printing paper and wrapping paper, but some also manufactured writing, blotting, and manila hemp paper.

Just prior to the Civil War, paper manufactured in North Carolina was said to have brought approximately $145,000 annually from northern markets into the state's economy. Some of the state's paper mills did not survive the war, and of the five that did, none outlasted the nineteenth century. Had any mills survived into the twentieth century, only an enormous infusion of fresh capital and a complete re-equipping of their plants would have permitted them to compete in an industry undergoing dramatic technological changes. In 1867 the Pagenstecher brothers of Interlaken, Mass., imported from Germany two Voelter grinders specifically designed to grind wood into pulp, set up the first ground wood mill in the United States, and began selling ground wood pulp to paper manufacturers.

Some North Carolinians discerned that the production of wood pulp for papermaking was a development of great economic importance. In 1901 the General Assembly made a deliberate effort to attract the wood pulp industry to the state by passing an act to encourage the building of pulp mills and paper mills. The act granted to firms spending $100,000 in establishing a pulp mill in Haywood and Swain Counties an exemption from criminal prosecution for polluting any watercourse on which they should build. The natural resources of plentiful rivers and great virgin stands of suitable hardwoods in the area, as well as the provisions of the act of 1901, proved irresistible. In 1906 the Champion Paper and Fibre Company began erecting a plant at Canton to supply pulp made by the soda and sulfite processes to the company's parent paper mill in Hamilton, Ohio. At the same time, the Halifax Paper Company began the production of kraft paper in Roanoke Rapids.

In 1939, the Ecusta Paper Corporation at Pisgah Forest in Transylvania County perfected a method of making fine Oxford India paper direct from the cellulose of the flax plant without having first to spin the retted and braked fiber into linen. The Ecusta mill remains a major supplier of tobacco papers for the United States and world markets, with a daily production capacity of 300 tons of paper. The company's line of specialty papers include those used to produce bibles, hymnals, dictionaries, reference books, and catalogs. In 2002, after its purchase by PURICO Corp., Ecusta employed about 1,000 people at the Pisgah Forest plant.

By the middle of the twentieth century, North Carolina paper production totaled $26 million annually. Twenty years later, the value was $431 million. By the early twenty-first century, there were eight paper mills operating in North Carolina. The annual value of paper and related products manufactured in the state was in excess of $2 billion; nearly 21,000 people were employed in their manufacture, with a payroll of $372 million a year.

Dard Hunter, Papermaking: The History and Technique of an Ancient Craft (1978).