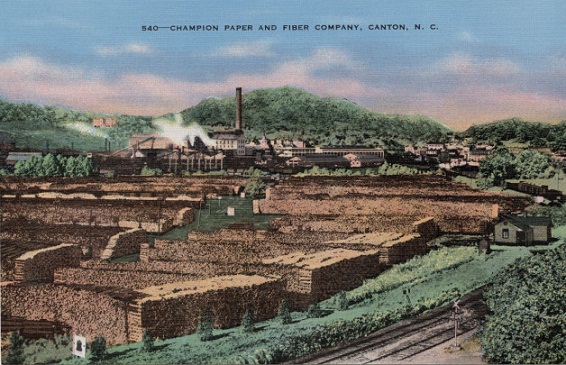 The Champion Paper and Fibre Company was formed in 1935 by the merger of Champion Coated Paper of Hamilton, Ohio, and the Champion Fibre Company of Canton, N.C. The paper company had been organized in 1893 by Peter Thomson, a retired printer. The fiber company had been established in 1906 by Reuben B. Robertson, Thomson's son-in-law, to provide wood pulp for the Ohio paper mill. Robertson's company pioneered several developments: it was the first mill to make white pulp from chestnut wood and one of the first mills to establish a paper chemistry research laboratory (1920s); it installed and operated the world's largest book-paper machine in 1933; and, by 1934, it had become the first mill to make high-quality white pulp from southern pine.

In 1931 Champion Fibre Company sold approximately 90,000 acres of forest land to the government to create the Great Smoky Mountains National Park. The company received $3 million for the land, which enabled it to buy new equipment and sustain profitable operations during the Great Depression. Other factors contributing to profitability were family control of the company, the production of high-quality writing and printing paper at low cost, and the extraction and sale of by-products from pulp and paper manufacture. After World War II, the company expanded its products to include kraft, cardboard, and drink-carton paper and also opened a pulp mill in Brazil.

Falling profits in the 1950s led the Thomson family to relinquish management to Karl Bendetson, who took drastic action to restore profitability. In 1967 Champion merged with U.S. Plywood to make more efficient use of both companies' timber resources. The new company was named U.S. Plywood-Champion Papers, but in 1972 the name was changed to Champion International Corporation. In 1984 Champion acquired St. Regis Corporation, a large producer of newsprint and magazine paper. This gave the company 6.4 million acres of forestland, making it one of the largest private landholders in the nation. The company sold some 2 million acres to raise capital. In the 1990s, Champion maintained extensive wood and paper operations in the United States, Canada, and Brazil. In 1999 Champion sold the Canton mill and other operations to its employees in a $200 million union-led buyout. The resulting company, Blue Ridge Paper Products, is an important producer of envelope papers, writing and printing papers, and packaging products.