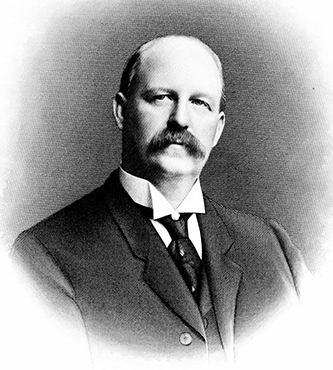 Jesse Lindsay Patterson, attorney, was born in Greensboro, the son of Rufus Lenoir and Marie Louise Morehead Patterson. His mother was the daughter of John Motley Morehead, governor of North Carolina from 1841 to 1845. His father was the son of Samuel Finley Patterson (1799–1874), a native of Rockbridge County, Va., who settled in Wilkesboro and had a prominent career in the political life of the state.

Patterson received his elementary education in the primary schools of Salem and in 1872 enrolled in the prestigious Finley High School in Lenoir. At that time the school was operated by Captain E. W. Faucette. Two years later Lindsay Patterson entered Davidson College, where he was graduated (1878) with the B.A. degree, ranking second in his class. At Davidson he was active in numerous campus organizations and was a recognized leader. Principal among his interests was membership in the Phi Society. Having determined to enter the legal profession, Patterson went to Chapel Hill to read law and attend the lectures of Judge W. H. Battle. Later he moved to Greensboro and for two years studied under two famous judges: Robert P. Dick and John H. Dillard. In the summer of 1881 he was admitted to the North Carolina bar and immediately located in Winston, where he practiced law for forty-one years.

For two years (1882–84) Patterson was solicitor of the Forsyth County Criminal Court and established himself as an able attorney, one who specialized "in the science of law." From that period of service his professional status was continuously enhanced, and for nearly forty years he was one of the most respected and honored members of the Forsyth County bar. He became affiliated with legal groups at the local, state, and national levels.

Politically, Patterson was an independent, which explains his lack of political appointments and positions. Only twice was he found to have any political status. In 1896 he was a delegate to the "Sound Money" Democratic convention at Indianapolis which nominated John M. Palmer for president and Simon B. Buckner for vice-president. The regular Democratic convention, held in Chicago during 21–23 June, nominated former President Grover Cleveland. Cleveland won the election by a vote of 277 to 145 in the electoral college, defeating Benjamin Harrison, the Republican nominee. The Sound Money Democrats and other splinter parties polled 285,297 popular votes out of a grand total of more than 12 million. Patterson's second political venture was no more successful. In 1902 he ran as an independent against incumbent congressman William Walton Kitchin of the Fifth District, a contest won easily by Kitchin.

Patterson's first law partner was Charles Yates. When Yates left the state, Patterson formed a partnership with Judge E. B. Jones, an association that dissolved after a dozen years when Judge Jones was elected to the bench. For the rest of his life he practiced independently and enjoyed a lucrative, prestigious practice throughout western North Carolina.

The capping legal experience in Patterson's career came in 1901, when he was defense attorney in the impeachment trial of two supreme court members, Chief Justice David M. Furches and Justice Robert M. Douglass. The justices were Republicans and party lines showed in the charges against them, charges judged sufficient by a Democratic General Assembly. It was to the credit of Patterson and his associates in the trial that the justices were acquitted of all charges. Patterson's summation speech to the North Carolina Senate has long been regarded as one of the greatest literary presentations that body has ever heard. It is still read by students of the law.

An even earlier famous case had brought Patterson local and statewide recognition. He was the successful counsel in the case of Whitfield v. Byrd (158 N.C. 451), which established title to the Pilot Mountain (the knob, not the town) after a long trial and several arguments before the state supreme court.

Patterson married, on 6 Sept. 1888, Lucy Bramlette Patterson (1865–1942; no relation), of Philadelphia, the daughter of Colonel William Houston and Cornelia Humes Graham Patterson. The Pattersons had no children.

Lindsay Patterson was stricken in the fall of 1919 and died in a Statesville sanitarium three years later. Funeral services were held in Statesville at the home of his sister, Mrs. A. L. Coble, with interment at the Chapel of Rest in Caldwell County's Happy Valley. During his entire career Patterson had found time for only two activities outside his practice of law. He served for two terms as a trustee of The University of North Carolina, which proved a pleasant experience for him and highly helpful to the school he respected and appreciated. In his home community he was an active member of the First Presbyterian Church; a longtime elder, he was concerned with many lay phases of the church.

Young lawyers in Winston-Salem found Patterson a willing and gracious counselor. He exhibited to them not only talent but also the life pattern of high ethics that one associate labeled "the very soul of honor." When the December 1922 term of the Forsyth County Superior Court convened, five lawyers, all trained in his office, shared in a memorial to Patterson.