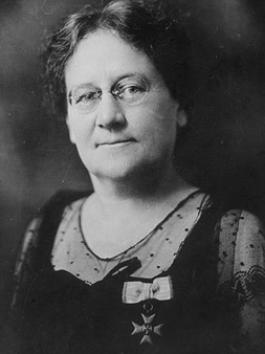 Lucy Bramlette Patterson Patterson, organizational leader, literary figure, and Republican national committeewoman, was born at Castle Rock, her mother's family home in Tazewell, Tenn., the daughter of Colonel William Houston and Cornelia Humes Graham Patterson. Her paternal grandfather, Major General Robert Patterson who had fought in the War of 1812, the Mexican War, and the Civil War on the Union side, lived in Philadelphia. She was graduated in 1882 from Salem Academy, where her mother had also gone to school; there she met her future husband, a promising young lawyer, J. Lindsay Patterson, who became a distinguished attorney, a trustee of The University of North Carolina (like his father and grandfather before him), and prominent throughout the state. They were married on 6 Sept. 1888. The Pattersons had no children of their own but reared two young nieces, Margaret and Catherine Miller, who were two of the three daughters of Mrs. Patterson's sister.

In 1924 Lucy Patterson built a vacation home in Russellville that she named "Long Hope Hill." From this point she wrote articles on her special interests and research, continuing a practice begun in her early life and founded, it is thought, on the habits of her father and other family members who have left some records of their literary pursuits. Beginning in 1904 or earlier she wrote for the Progressive Farmer ; columns carrying her picture, and often sketches to illustrate her stories, appeared under various titles, including "Just a Bit of Eden" (6 Jan. 1912), "Southern Little Gardens" (3 Mar. 1917, 14 Jan., 25 Feb. 1922), "Winter on Long Hope Hill" (31 Jan. 1925), "Winter Hints on Books and Beauty" (29 Jan. 1927), "What Makes a Girl or Woman Charming" (29 Apr. 1930), and "Here Are Flowers You Will Enjoy" (15–31 July 1931). There were probably other column titles, for many of the clippings to be found in her files now preserved in the Manuscript Department of Duke University Library are unidentified; her page in the Progressive Farmer appeared from about 1904 to 1918. Other columns were published in the Charlotte Observer under the title "Days of the Right Hand" (3 Sept. 1905; 17 Sept., 9, 16 Dec. 1906; 20 Jan., 24 Mar., 7 July, 11 Aug. 1907) and "Observations of an Early American Capitalist" (11 Aug. 1907). An article seemingly related to this last column, "Sketch and Diary of General Patterson," appeared in the Journal of American History , evidently just before 1 Dec. 1907, when it is alluded to in one of her columns in the Charlotte Observer ; her writing for this newspaper goes back at least to December 1903, when she filled in at Christmas while columnist J. P. B. was on a two-week vacation.

In the Winston-Salem Journal-Sentinel her regular column "Just One Thing and Another" appeared for a time, one bearing the date Sunday, 28 June 1931. Two unidentified published stories, "Mrs. Jackson in Washington" and "Mrs. Jackson's Tobacco Factory," are evidently parts of a serial showing the heroine as the Honorable Mrs. Jackson, secretary of state, and in other leadership roles that seem to be a continuation of one of the themes that runs through Mrs. Patterson's columns, that of woman's rights and opportunities in business, the arts, and politics. In addition to her work as a writer she drew others from the few in the state who from 1888 to 1919 were active in literary pursuits; her home, Bramlette, became a center for them, the high point being her annual house party. Her role as a gracious hostess may also have been patterned after that of her forebears; the novel Captain Macklin by Richard Harding Davis is based in part on the character, home, and guests entertained by General Robert Patterson, Lucy B. Patterson's grandfather. Her father was writing his memoirs at the time of his death; in Mrs. Patterson's files some of his writing and art work, especially woodcut designs on letter paper, give insight into his tastes and talents as well as his interests as a social leader and host. 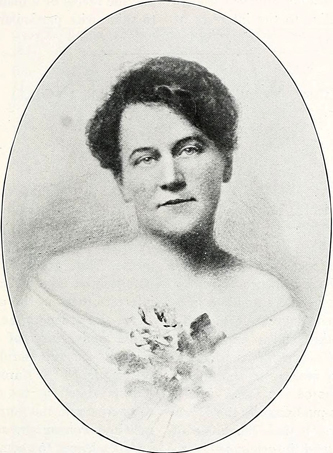 Lucy Patterson is perhaps best remembered for her annual award for literary achievement in the state, the Patterson Memorial Cup, a massive three-handled gold-plated on sterling silver loving cup set with forty-nine precious stones from North Carolina mines. Thirteen writers received the award from 1905 to 1933, when their engraved names filled up all the available space on the sides of the cup and it was retired to the Hall of History (now North Carolina Museum of History). In 1930 it was replaced by the Mayflower Society Cup, established through the State Literary and Historical Association as the Patterson Cup had been. Awardees of the Patterson Cup include the poet John Charles McNeill, who received the cup from the hand of President Theodore Roosevelt on a visit to Raleigh (19 Oct. 1905); the Honorable Samuel A'Court Ashe (1908); Horace Kephart (1913); and Josephus Daniels (1922). This award, her writing, and her close ties with other writers earned for her the sobriquet "Inspirer of Tar Heel Writers" to add to that of "Our Patroness" from a grateful editorial writer and "Our Lady of Letters" from a Charlotte Observer correspondent. The latter title was used in a story about her appearing in Sky-Land Magazine (September 1914).

During the reconstruction period after World War I, Mrs. Patterson visited the Balkan countries and wrote letters home describing her experiences, some of which are preserved with her papers. She became acquainted with the royal family of Rumania and was later entertained by Queen Marie; she was decorated by King Alexander of Yugoslavia for her work in Serbia and was made an honorary member of Kola Sestara, an organization for the relief of war widows and orphans. She traveled widely all during her life, beginning with a trip to Egypt as a young girl; in her mid-sixties, she spent a winter in Moscow. Throughout the years she had widespread interests: she was the organizing president and president for the first three years (1902–5) of the State Federation of Women's Clubs; organizing regent (1902) of the Centennial Chapter of Salem, later renamed the General Joseph Winston Chapter, Daughters of the American Revolution (DAR); and the first North Carolinian to be elected vice-president general of the National Society DAR, serving two terms (1906–9).

In 1907, as president of the Southern Woman's Interstate Association for the Betterment of Public Schools, she spoke at the Tenth Annual Conference for Education in the South held at Pinehurst; in 1913, as chairman of the Interstate Boone Trail Association, she saw to completion the marking of Daniel Boone's trail from North Carolina through Tennessee to Kentucky; and in 1915 she was chairman of the newly organized Forsyth Moonlight (Night School) Association, which enlisted volunteers as teachers in an adult education program. She was state chairman of several national committees, including the Jamestown Historical Commission, Shakespeare Ter-Centenary Celebration, and Work for Relief in Belgium. The North Carolina exhibit at Jamestown won one of the three silver medals for excellence; the medal is now owned by the North Carolina Literary and Historical Association, of which Mrs. Patterson once served as president. A description of the exhibit by Miss Mary Hilliard Hinton in the North Carolina Booklet for 1907 includes a tribute to Mrs. Patterson in which she is credited in large measure with the planning and much of the execution in arranging the exhibition.

In 1922 Lucy Patterson campaigned actively, though unsuccessfully, in the Fifth Congressional District against Major Charles M. Stedman, a Democrat; she upheld the reasonableness of the Republican tariff, arguing for its help to wages; emphasized her support of action to make the tax burden lighter; and urged especially the need for and justice of having women in diplomatic and consular positions. An effective party worker on the national level, she served on the Republican National Executive Committee from about 1923 until her death—a period of almost twenty years—first as an associate member and later as national committeewoman from North Carolina.

After a five-week illness Mrs. Patterson died at Winston-Salem and was buried at Bethesda Cemetery between Russellville and Morristown, Tenn. She had been for many years an active member of the First Presbyterian Church of Winston-Salem.

Samuel A. Ashe, ed., Cyclopedia of Eminent and Representative Men of the Carolinas (1892) and "J. Lindsay Patterson," Biographical History of North Carolina , vol. 2 (1905)

"The Old Patterson Mansion, The Master and His Guests," Pennsylvania Magazine of History and Biography , 39:1 (1915)