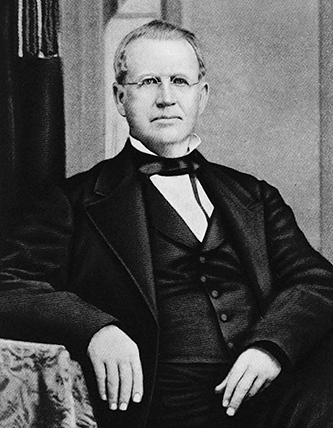 Samuel Finley Patterson, planter and politician, was born in Rockbridge County, Va., of Scotch-Irish parents. In 1811 he moved to Wilkesboro to live with his uncle. There he became a clerk in the store of Waugh and Finley until he turned twenty-one and began his own business, which he pursued until 1840. In 1848, in a village that was named for him, he started—along with Edmund Jones, his brother-in-law, and James C. Harper—the first industry of any importance in Caldwell County: a cotton factory.

At this time, however, Patterson was more interested in politics. At age twenty-two he won the position of engrossing clerk of the House of Commons and for fourteen years thereafter he continued to be elected to some clerkship in the state legislature. In 1835 he became chief clerk of the senate, and from 1835 to 1837 he served as treasurer of North Carolina. He was a Whig with a strong interest in internal improvements, a concern that was strengthened while he was president of the Raleigh and Gaston Railroad in its early stages of growth from 1840 to 1845.

Patterson married Phebe Caroline Jones, the daughter of General Edmund Jones and the granddaughter of General William Jones, both planters and politicians from Wilkes and later Caldwell County. When his father-in-law died in 1845, Patterson moved to his wife's family home, Palmyra, in the Happy Valley of the Yadkin River in Caldwell County, to engage in farming and politics, careers that occupied him for the remainder of his life. The year he returned to Caldwell County, he was elected chairman of the county court, a post he held until the court was dissolved and a new court structure was created by the state legislature in 1868. He also served in the state senate in 1846 and 1848. During the latter term, as chairman of the Committee on Internal Improvements, he wrote the bill chartering the North Carolina Railroad Company. Patterson again served Caldwell in 1854 as a member of the House of Commons, in 1864 as a state senator, and in 1866 as a delegate to the second session of the state's constitutional convention.

As a Whig, he originally opposed secession. And after the Civil War, in a letter to his son Rufus, he claimed that he was "content with a return to the old government under which I never felt that I was opposed." But during the war he was loyal to his state and rejoiced over Southern victories. After the war, he joined the Conservative and later the Democratic party, attending the 1866 Philadelphia Peace Convention which supported Andrew Johnson and his policies as opposed to the Republicans. In 1868 he was nominated by the Democrats for the office of superintendent of public works but was defeated, as were the rest of his party's nominees. After that, he essentially retired from public life, returning to Palmyra.

Patterson also held several less important offices during his lifetime, including clerk of the superior court, justice of the peace, and, in 1839, Indian commissioner. He was also a brigadier general and later a major general in the state militia and thus became known as General Patterson. In addition, he served as a trustee of The University of North Carolina. In 1828 he became a junior grand warden of the Grand Lodge of Masons in North Carolina; in 1830 and 1831 he was deputy grand master and in 1833 and 1834 grand master. Patterson was active in the Episcopal church, serving as a lay reader, warden, and vestryman for many years. In 1871 he attended the General Convention of the church in Baltimore as a lay delegate from the North Carolina Diocesan Convention. 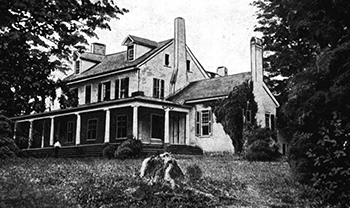 Though entrenched in public life, Patterson also loved farming. He constantly read and contributed to agricultural journals; at Palmyra, he introduced new seeds, improved implements, and experimented with better methods of cultivation. His home was a showplace in the county. He remodeled it in the 1850s, adding two wings, a dining room and pantries, and a large staircase. On the plantation he also had a blacksmith and carpenter shop, a shoe shop, and a loom room. Both of his sons became successful and prominent North Carolinians, Rufus L., as a manufacturer and entrepreneur, and Samuel L., as a planter-politician and onetime commissioner of agriculture.

Patterson died at his home and was buried in the family cemetery in Caldwell County.