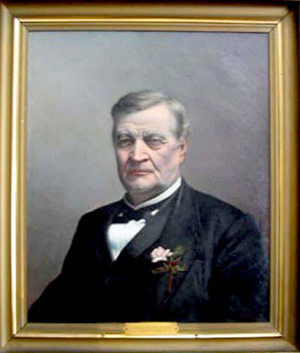 John Henry Dillard, attorney, judge, and law teacher, the son of Lucy Moorman of Campbell County, Va., and James Dillard of Albemarle County, Va., who moved to North Carolina and settled on Matrimony Creek above Leaksville, was born on his father's farm in Rockingham County. He attended the Patrick Henry Academy in Virginia and Samuel Smith's school in his native county where a classmate was Thomas Ruffin. Between 1837 and 1839 he spent eighteen months at The University of North Carolina, but ill health forced him to withdraw. In 1879, however, the university conferred upon him the honorary degree of doctor of laws. He entered the law department of the College of William and Mary in 1839 and, after studying under Beverley Tucker there and receiving the degree of bachelor of laws, he was admitted to the bar in Richmond. In 1841 he opened an office in Patrick County, Va., where he practiced for five years; for a portion of that time he also was commonwealth's attorney. Returning home to Rockingham County in 1846, he soon formed a partnership with Thomas Ruffin that lasted until 1861 when the Civil War brought about its dissolution.

As a Whig Dillard was opposed to secession and did all he could to prevent it, but once that step was taken he supported the state's action. For a brief time he served as captain of Company G, Forty-fifth Regiment. Returning once again to Rockingham County, he resumed the practice of law until 1868 and was for a time county attorney and for a number of years the clerk and master in equity. Settling in Greensboro, Dillard formed a partnership with John A. Gilmer and Thomas Ruffin and in 1878 was elected an associate justice of the North Carolina Supreme Court. Because of ill health, however, he resigned in 1881 to resume his practice in Greensboro until his death.

Dillard probably made his most significant contribution as a teacher. In 1878 he and Robert P. Dick established a law school in Greensboro where they trained a great many influential lawyers.

In 1846 Dillard married Ann Isabel, daughter of Colonel Joseph Martin of Henry County, Va. They became the parents of five children: Lucy (Mrs. John T. Pannill), Thomas Ruffin, Annie (Mrs. E. F. Hall), John Henry, and Drury. After the decline of the Whig party, Dillard became a faithful Democrat. He was a member of the Presbyterian church in which he was a ruling elder and a Sunday school teacher; he was also a member of the Freemasons. Throughout his life he was described as shy and reticent; he took little part in political affairs and was uninterested in social life.