by Richard A. Stephenson and William S. Powell, 2006

The story of cartography, or mapmaking, in the North Carolina region may have begun with the Vinland map of 1440. Although its authenticity has been questioned, the map gives ample evidence, as tested by renowned scholars, that the East Coast of the New World from Newfoundland to Cuba was visited by Europeans well before Columbus. This was when North Carolina, as it is defined today, was known as "Nova Albion."

The early maps of the area that was to become North Carolina resulted from the mapping and compilation of information of the coast by ancient mariners and explorers. Mapping and recording observations from the deck of a bouncing ship were not easy tasks. The early maps were generally nothing more than rough sketches of the coastline with latitudinal measurements taken with a backstaff, distances measured with an alidade, and depths taken with a lead line. Surveying by the more modern method of triangulation came into practice with Thomas Harriot on the second of the Raleigh voyages in 1585-86, although triangulation was used to make maps as early as 1535 by Gerhard Mercator. Early maps did not usually have longitude, nor were they very accurate, sometimes intentionally so. Still, some of the maps were quite good (especially John Smith's map of 1612). 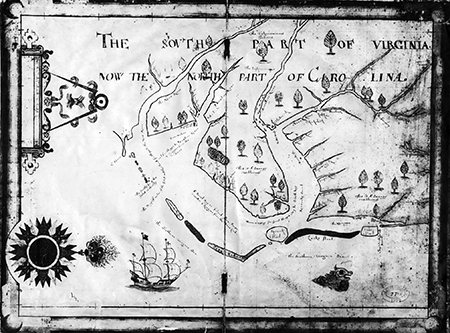 Much of the exploration and discovery of America in the late fifteenth century and the sixteenth century was undertaken to find a shorter route to the Far East, and many maps were used to market that theme. Indeed, often a map's accuracy was secondary to its elaborate beauty. Such are the maps of the Thames School. In particular, Nicholas Comberford's map of 1657 shows a very generalized North Carolina coastline with scattered trees inland and Pamlico Sound described as a broad bay or inland sea. The Comberford map contains the earliest evidence of permanent European settlement of the region that became North Carolina. This colored manuscript map on vellum in the National Maritime Museum, Greenwich, England, is titled "The South Part of Virginia." Another one in the New York Public Library, otherwise virtually identical, has added in a later hand, "now the north part of Carolina." Shown between the Roanoke River and Salmon Creek is "Batts House," the trading post/home of Nathaniell Batts, believed to have been the first permanent settler of the colony.

By the mid-seventeenth century, maps were used to describe the virtues of America and other places of the New World. John Ogilby's atlas of America in 1671 and John Speed's map and description in 1676 are wonderful examples of early marketing. The early settlement of North Carolina, known as "Virginia" in 1675, began in the Albemarle Sound area and continued into the early 1700s. William Hack's map of 1684 shows the Appalachian Mountains, as more was being learned about the interior of America. Exploration of the interior portion of North Carolina was soon followed by settlement inland. John Lawson's map of 1709 and his surveying commentary attest to the acclimation of explorers to the landscape. More and more place names were being mapped and recorded. Place names began to appear on the maps in vastly greater density, and the descriptions on the maps were in much better detail.

In colonial times, as settlements were located more inland, explorers established trails, most of which were borrowed from the Indians. Surveyors following by foot or on horseback trotted across the frontier to divide up the land established by the king. Edward Moseley's map of 1733 added greatly to the understanding of the interior of North Carolina, as did James Wimble's 1738 map of the coast. John Collet's map of 1770 gives the names of settlers, and details such as shoals, swamps, and roads appear on the 1775 map of Henry Mouzon. Joshua Fry and Peter Jefferson's map of the same year shows the name and location of stores, ferries, and roads. The North Carolina area was finally becoming settled.

As the United States became more spatially and politically organized after the American Revolution, the government took on the responsibility of mapmaking. Surveying and mapping by the government began by act of the Continental Congress on 20 May 1785, and the Board of Engineers was created in the early 1800s. The mapping of the coasts, harbors, and rivers became very important to the government. Thus, the need for individual surveyors, mapmakers, and the like became practically obsolete in the private sector, and they moved on to do mapping in the western United States, Canada, South America, Africa, and Pacific Coast.

David B. Quinn and Alison M. Quinn, The First Colonists: Documents on the Planting of the First English Settlements in North America, 1584-1590 (1982).

Ogilby, John. "A new discription of Carolina by the order of the Lords Proprietors," 1671. Image from North Carolina Maps. http://dc.lib.unc.edu/cdm/singleitem/collection/ncmaps/id/498/rec/1 (accessed October 10, 2012).