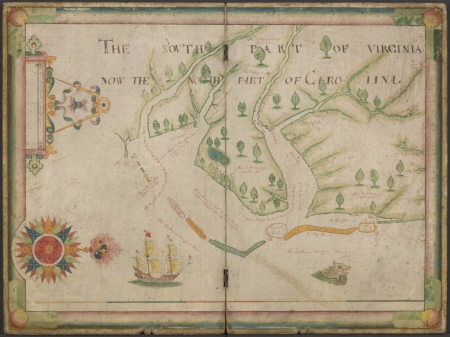 Nicholas Comberford, chartmaker in London and a central figure in the group now designated the "Thames School," claimed to have been born in Ireland and was quoted as saying that his father "was Nicholas the King's gaoler at Kilkenny." Comberford, in various spellings, was a fairly common name among the Anglo-Irish families of Kilkenny and other parts of southern Ireland, but efforts to connect Nicholas the chartmaker with Nicholas the king's gaoler have not been successful.

The Thames School group is so called because of similarities in the style of the members' hand-drawn sea charts, the fact that their residences were clustered in the hamlets east of the Tower along the Thames, and the common experience of most of them in a century-long series of master-apprentice connections within the Drapers' Company. The first firm dates for Nicholas are his eight-year apprenticeship, 1612–20, to John Daniel, a chartmaker of the Drapers' Company whose charts date from 1612 to 1642. Comberford took the freedom in the Drapers' Company, and we know of twenty-seven charts dated from 1626 to 1670 signed by him, usually with the address "neare unto the West Ende of the Schoole House in Ratcliff." Comberford was buried at St. Dunstans, Stepney, on 6 Dec. 1673.

There is no indication that Comberford ever visited the New World, but among his known charts are two of the North Carolina coast, one preserved at the National Maritime Museum in London, the other at the New York Public Library. Both charts are hand drawn on vellum, in color, with decorations, and mounted on two wooden panels hinged to close like a book—a style and format followed by all Thames School practitioners of the period. Both have a title across the top of the map (an unusual feature), "The South Part of Virginia," and bear signature and date" . . . By Nicholas Comberford . . . 1657." Both show the Carolina Banks centering on Cape Hatteras with the adjacent mainland coast and estuaries as far south as Cape Lookout in considerable and nearly identical detail. There are some differences in decoration, but more importantly the example at the New York Public Library carries a subtitle, below the main title and in a different seventeenth-century hand, which reads "Now the North Part of Carolina."

Little biographical information has been uncovered regarding the chartmakers of the Thames School, but three useful bits have turned up on Comberford. Samuel Pepys visited Comberford's shop but left only a frustratingly brief comment in his diary entry for 22 July 1663: " . . . and so by water to Ratcliffe and there went to speak with Comberford, the platt-maker and there saw his manner of working which is very fine and laborious." No other references have been found in Pepys, despite his long-continued interest in the state of English chartmaking and the comparative accuracy of hand-drawn as against printed charts.

A more enlightening account of a visit to Comberford comes from W. Dobbyns's "Narrative of a Deceiving of Expectations" in December 1655. The motivation for the visit was not cartographic, and Dobbyns had some difficulty in finding Comberford's house, "the ways beyond the houses at Wapping being very deep." Arriving at the house he was met by a woman (apparently the wife of Comberford's son) whom he described as "an ill-favored dirty slut." Comberford showed him some charts, and Dobbyns's account continued "upon debate of the price of what a map was worth, 25 shillings was the lowest, and he (Comberford) swore that he could make but one in three weeks . . . and that he and his son had much ado to maintain themselves and their family  . . . "; the account then turned to other matters. By this account, chartmaking appears to have been laborious, ill-paid, and not held in very high regard, although Dobbyns, who had come with the expectation of finding a rich relative of friends in Ireland, may be a biased witness.

The third and most important item is the notice of Comberford's wedding in 1624, which identifies him as "Nicholas Comberford, of the precincts of St. Katherine, draper." The discovery that Comberford had been a member of the Drapers' Company, a totally unexpected association, led to the voluminous records at the Drapers' Hall and the further discovery that a series of master apprentice connections extending from 1590 into the early eighteenth century linked thirty-seven individuals, many of whom were identified as chartmakers. Twelve of these produced signed charts still in existence, within a total corpus, including a considerable number of anonymous charts, of at least fifteen hundred manuscript charts and maps in Thames School style. Comberford occupied a central place in this sequence and probably had at least indirect influence on other manuscript maps of the Carolina coast drawn (more likely copied) in the years after 1657. He had six apprentices of record, including his son, Thomas (fl. 1655–57), from whose hand no signed chart has yet been identified. Two other of Comberford's apprentices, Andrew Welch (fl. 1649–77) and John Burston (fl. 1628–65), took the freedom in the company, produced signed charts, and trained apprentices who themselves produced charts of the Carolina coast.

William Hack (fl. 1670–ca. 1700) began an apprenticeship with Welch in 1670 and is chiefly known for numerous copies, made during the two decades after ca. 1682, of an elaborate Spanish Derrotero, with many charts of the coasts and harbors on the Pacific side of the Americas. He also produced an atlas of the Atlantic coast of North America, without dedication or date, which contains a map of Carolina. In the British Museum there is also a separate map of Carolina, signed and dated 1684, as well as others that may also be by Hack.

Four other contemporary manuscript maps of the Carolina coast are found in the Blathwayt Atlas, an assemblage of forty-eight maps put together ca. 1682–83 by William Blathwayt, secretary to the Committee of Lords for Trade and Plantations. Long in possession of the Blathwayt family, the Atlas is now one of the treasures of the John Carter Brown Library, which has recently sponsored a handsome facsimile reproduction of the maps and also a brilliant commentary by Jeannette Black, curator of maps. The four Carolina maps are beautifully reproduced in color and are among ten manuscript maps in the Blathwayt Atlas done in the style of the Thames School. One map (no. 21) is of Albemarle Sound and dated 1679 and is the only known work signed by James Lancaster (fl. 1656–79), an apprentice of John Burston and, like Hack, "once removed" in the master-apprentice sequence from Comberford. The other three are similar in style and format to Lancaster's map but are not by his hand and are unsigned and undated. Miss Black believes one of the maps to be by the same draftsman who produced several other maps of the Carolina coast now preserved in the British Museum and the Public Record Office. The other two Carolina maps, nos. 18 and 19 in the Blathwayt, show the results of Hilton's two voyages in 1662 and again in 1663–64 but are by two different draftsmen of the Thames School. Like Comberford, the Thames School copyists of these four and the other six Thames School charts in the Blathwayt Atlas appear to have used up-to-date information, although Miss Black, like Cumming, cannot identify actual cartographic sources. Nor can she identify the draftsmanship of the unsigned maps as identical to Comberford's or to that of any member of the group whose signed work is known. Comberford's maps of 1657 were, however, the first indication of interest and participation in the detailed mapping of the Carolina coast by the Thames School chartmakers, although the degree of his involvement with the work, only some of which could have been accomplished before his death, remains unclear.

Tony Campbell, "The Drapers' Company and Its School of Seventeenth Century Chartmakers," in My Head Is a Map, ed. Helen Wallis and Sarah Tyacke (1973).