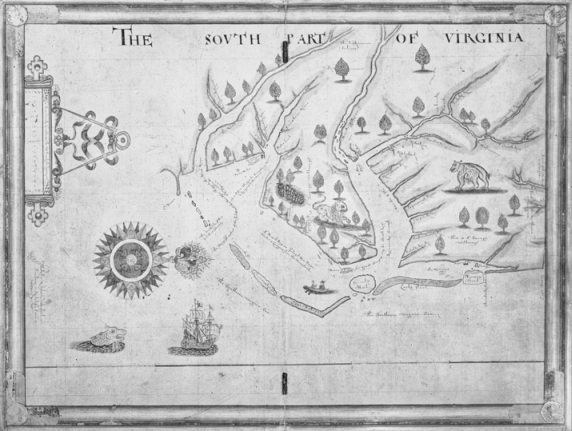 Fur trader Nathaniell Batts, reputedly North Carolina's first permanent white settler, apparently worked for Francis Yeardley of Lynnhaven River, Va. (modern-day Virginia Beach), who in 1653 sent Batts to explore the Albemarle Sound area of what is now North Carolina to identify fertile lands that Yeardley might acquire for development. Batts's efforts led to an arrangement between Yeardley and Chief Kiscatanewh of the Pasquotank Indians for Yeardley's purchase of an extensive tract, probably at the mouth of the Pasquotank River. As part of the arrangement, Yeardley would build an English-style house furnished with English goods for Kiscatanewh. In the spring of 1655, Yeardley employed carpenter Robert Bodnam to travel south with five workmen and build Kiscatanewh's house and another for Nathaniell Batts "to live in and trade with the Indians." Bodnam made two trips, probably one for each house, and spent a total of five months in the Albemarle Sound area. Yeardley died while the work was in progress.

Batts's house, evidently erected on the south side of the mouth of Salmon Creek, measured 20 feet square, with two rooms and a chimney. Batts used the house primarily during fur-trading seasons and after 1655 made his home on Lynnhaven River with his wife and family. Batts later moved to Albemarle and apparently settled at the site of present-day Edenton, where he owned land. Batts told George Fox in 1672 that he was formerly a "governor" in Carolina, perhaps referring to some authority he may have held, under Proprietary governors, over a handful of settlers who occupied land on Salmon Creek until driven off by the Tuscarora Indians around 1667.

The Batts house on Salmon Creek, or its replacements, was probably the center of fur trade between whites and the Tuscarora and other area Indians for more than half a century. John Lawson, visiting the site around 1708, described there "a House made of Logs, (such as the Swedes in America very often make, and are very strong)," which Governor Seth Sothel, owner in the 1680s of a large tract of Salmon Creek land, had used as a fur-trading facility. The site of the house is indicated on Nicholas Comberford's 1657 map of the "South Part of Virginia."

Francis Yeardley (Yardly) was the man who sponsored Batts. He was the son of Sir George Yeardley, a former governor of Virginia. This is extremely well documented (see early narratives) and this identification error is extremely careless, in my opinion. How can I trust the facts and statements listed in the rest of the entry with errors like this?

Thank you for commenting and letting us know the issue. I will pass onto NCpedia editors about correcting the issue.