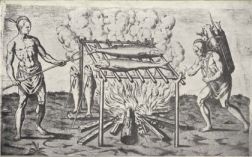 The Pasquotank Indians, also known as the Paspatank, were last identified in the early eighteenth century on the Pasquotank River north of Albemarle Sound. They were probably part of the Weapemeoc group. An Algonquian-speaking people, the Pasquotank farmed, hunted, fished, and lived in villages often surrounded by palisades made of logs. They were not mentioned in the documents of the Roanoke Colony, but in the early eighteenth century Englishman John Lawson described them as a tiny tribe numbering 10 warriors, suggesting a total population of less than 50.

Maurice A. Mook, "Algonkian Ethnohistory of the Carolina Sound," Journal of the Washington Academy of Sciences 34 (15 June, 15 July 1944).

"Indians Cooking Fish." From the John White drawings in Ashe's History of North Carolina. Courtesy of UNC's Documenting the American South. Available from https://docsouth.unc.edu/nc/mcpherson/mcpherson.html#p76a (accessed May 23, 2012).