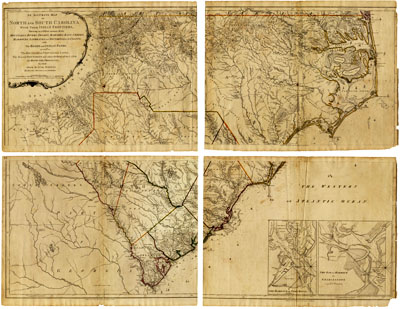 Henry Mouzon, Jr., mapmaker and civil engineer, was the grandson of Louis Mouzon, a Huguenot immigrant to South Carolina who obtained warrants for land in Berkeley County in 1705 and 1708. Early in the second quarter of the eighteenth century, Henry Mouzon, Sr., moved north across Santee River to a plantation at Pudding Swamp in Craven County (now Williamsburg County), S.C., where his son, Henry, Jr., was born. After his father's death in 1749, young Mouzon was sent to France for his education, and presumably while in that country he learned engineering.

Mouzon received his first public commission of real consequence in 1771 when he, along with Ephraim Mitchell (subsequently the surveyor general of South Carolina), was appointed by Governor Lord Charles Greville Montague to survey the boundaries of the civil districts of South Carolina. In the following year Mouzon prepared "A Map of Part of the Counties of Mecklenburg and Tryon Lately Added to the Province of South Carolina," occasioned by the location and survey of the westward extension of the boundary between North Carolina and South Carolina earlier in 1772. In January 1773 he advertised "Proposals for Engraving by Subscription, a Map of St. Stephen in Craven County . . . embellished with a curious Representation of the Process of manufacturing Indico. . . . "

At the same time, Mouzon was projecting plans for another map, for he and Mitchell appear to have agreed to incorporate corrections made during their surveys of 1771 in a new map of South Carolina. They jointly advertised their proposals for the execution of a new map in May and June 1774. Mitchell, however, must have withdrawn from the project, causing Mouzon to abandon the plan to create an original map of the colony. Instead, Mouzon produced a map of both North Carolina and South Carolina by consolidating James Cook's 1773 map of South Carolina with John Collet's map (chiefly the work of William Churton) of North Carolina. Mouzon drew on his recent surveys in order to show district lines in South Carolina with greater accuracy and to delineate the 1772 western extension of the boundary between the two colonies. Concurrently, he projected the major rivers and watercourses so as to correct the faulty perspective in the maps of Cook and Collet, corrected the soundings along the North Carolina coast, and placed the names of the North Carolina counties so they would agree more completely with their physical boundaries (though those boundaries were not drawn).

"An Accurate Map of North and South Carolina" was the masterpiece of Mouzon's life. It was published by Sayer and Bennett in London in 1775 and in a French edition by one of the royal geographers, George L. LeRouge, in Paris in 1777. In these forms it was used by American, British, and French forces during the American Revolutionary War. A reissue, using the original engraver's plates, was published in London by Laurie and Whittle, successors to Sayer and Bennett, in 1794. Mouzon's map remained the authority for North Carolina until Price and Strother's map was published in 1808.

Shortly after the British army moved its offensive to the southern colonies, Mouzon became involved in local armed resistance to the British. After the fall of Charles Town in May 1780, an American battalion was formed in Williamsburg District, Mouzon accepted a commission as captain over one of the companies, and the battalion was attached to Francis Marion's brigade. Banastre Tarleton is said to have singled out Mouzon for exemplary punishment, and on 1 Aug. 1780 Mouzon's mansion house and fourteen outbuildings at Pudding Swamp were burned by British forces. Six weeks later, at the Battle of Black Mingo, Mouzon was wounded so badly that he was crippled for life. It is assumed that this injury terminated his promising career as an engineer. In 1772 Mouzon had conducted surveys to determine the proper bed for a canal connecting Santee and Cooper rivers, but there is no evidence that he conducted similar projects after the war. The toll bridge across Black River that bore his name and that was vested in him in 1805 for a term of five years was presumably constructed to his plans and under his supervision; if so, it was his single engineering feat during the later half of his life.

By his wife, Susannah Taylor, Mouzon had eight children: Peter, William, Samuel R., Henry, Sarah, Mary, Susannah V., and Ann. He was buried in the Mouzon burying ground near his home on Pudding Swamp.

Recently, historians have suggested that the manuscript map used for the published map was drawn by Louis Delarochette. The provenance and attribution of the Mouzon map to Henry Mouzon, Jr. is a subject of current debate.

North Carolina Map Blog. "Anniversary of the Mouzon-Delarochette map of the Carolinas." May 30, 2015. http://blog.ncmaps.org/index.php/mouzon-delarochette/