Part 2: The Cradle of North Carolina: Coastal Plain and Sandhills 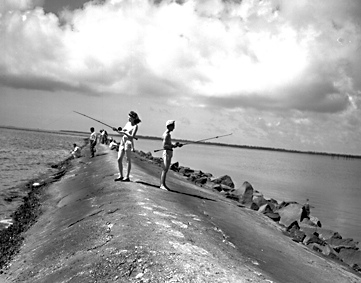 Twenty or more counties lie in North Carolina's Coastal Plain, which is generally considered to be all of the state's land east of modern-day Interstate 95. Below the rapids of the Roanoke River at Roanoke Rapids and Weldon, and below Raleigh on the Neuse River and Fayetteville on the Cape Fear River, broad terraces nearly 200 miles wide in places drop into enormous stretches of river bottom, swamp, pocosins, and marsh. Bodies of water increase with proximity to the ocean, with greater sounds dominating the northern area and lesser ones in the southern portion. These sounds, the largest of which are the Albemarle Sound and the Pamlico Sound, separate the mainland easternmost Coastal Plain from the barrier islands, or Outer Banks, which include Currituck Banks, Core Banks, Shackleford Banks, Bogue Banks, and a succession of close-in barrier islands stretching down to the South Carolina state line.

Hunted, farmed, and fished by Native Americans for millennia, and settled with difficulty by English, Highland Scots, and other Europeans during the seventeenth and eighteenth centuries, the amazingly fecund Coastal Plain was characterized by daunting problems of transportation. Only two deepwater inlets served the vast coast, and the Coastal Plain presented those traveling by foot, horse, coach, or wagon with no shortage of swamps and sloughs, murky basins, and seemingly impenetrable pocosins. The very southeastern portion of the region early in colonial times supported a rice culture, and between the 1790s and the Civil War some portions of the upper Coastal Plain did see massive land-clearing, drainage, and corn and wheat plantations.

One of the Coastal Plain's chief natural assets was once a vast band of longleaf pine forest, almost all of which was tapped for rosin for tar, pitch, and turpentine by the early twentieth century. Coastal Plain waters offered fishermen considerable bounty, and the Albemarle Sound herring hauls of the nineteenth century were legendarily productive. Much of the Coastal Plain was opened up in the decades after the Civil War by the development of a network of steamship and railroad connections, allowing coastal fish, fowl, and market crops to be shipped quickly and efficiently to northern markets such as Baltimore, Philadelphia, and New York.

Peanuts and Irish potatoes remain important crops in the northern Coastal Plain, while blueberries, strawberries, watermelons, and sweet potatoes grow in the southern portion. Tobacco, though in decline, was still a significant eastern North Carolina crop in the early 2000s. Large livestock operations-involving both poultry and pork producers-have created both employment opportunities and environmental concerns across the region, as has large-scale commercial forestry. Vineyards are also on the rise in the modern era.

With larger cities such as Wilmington and Greenville as exceptions, the Coastal Plain is mainly a web of small towns and crossroads communities. Most of its counties fall under the jurisdiction of the state's Coastal Area Management Act (CAMA), passed in the early 1970s in an attempt to guide planning, manage expected population growth, and preserve and protect the area's rich and diverse natural resources. Numerous national wildlife refuges are in the Coastal Plain, including the Great Dismal Swamp; the Alligator River, Pocosin Lakes, Mattamuskeet, and Swan Quarter National Wildlife Reserves; and the Croatan National Forest.

Against this abiding natural wealth, and owing in part to the decline of small-farm agriculture, many of the Coastal Plain's counties, particularly those in the central and northeastern area, have long been numbered among the poorest in the South and have been further hampered by racial disunity. Significant efforts are also being made-particularly since the floods of Hurricane Floyd in 1999 devastated large sections of the Coastal Plain-to remedy the region's chronic underemployment and impoverishment, with such agencies as the Golden LEAF Foundation, the Rural Prosperity Task Force, and the Fund for a New East taking the lead.

The Sandhills region in the southwest corner of North Carolina's Coastal Plain includes parts of Cumberland, Harnett, Hoke, Lee, Montgomery, Moore, Richmond, and Scotland Counties. The state's peach-growing industry is concentrated in the Sandhills, and cotton and tobacco are also important crops. The region is one of fairly small cities and towns, with Fayetteville in Cumberland County being by far the largest. Each county in the Sandhills contributes to the diverse overall economy of the region. Cumberland County, the home of Fort Bragg and Pope Air Force Base, is also a center for printing and publishing, lumber and wood products, and apparel and textile products from fibers. Lee County, known as the "Brick Capital of America," also manufactures clay and pottery products and fabricated metal products (excluding machinery and transportation equipment). Moore County is famous as a resort and golf destination, centered at Southern Pines, Pinehurst, and the adjoining cities of Aberdeen and Pine Bluff.

Attractions and events in the Sandhills include several museums at or near Fort Bragg, such as the John F. Kennedy Special Warfare Museum and the Airborne and Special Operations Museum, which opened in August 2000. The National Railroad Museum and Hall of Fame is in Hamlet, a railroad town for more than a century. The Weymouth Woods Sandhills Nature Preserve near Southern Pines has more than 600 acres of natural area, hiking trails, and fields of wildflowers, as well as a nature museum to aid visitors in interpreting the flora and fauna of the region.