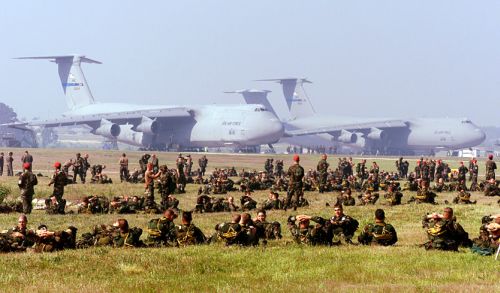 Pope Air Force Base was established in 1919 as Pope Field, named for 1st Lt. Harley Halbert Pope (1879-1919), who was killed when his JN-4 Jenny crashed into the Cape Fear River near Fayetteville. The base is located on 1,885 acres next to Fort Bragg in Cumberland County. From 1919 to 1927 the base was used for observation balloon training. In 1927 Maj. Carl Spaatz conducted bombing training there, and in 1929 the base was used for joint air-ground training. The runways were paved in 1940. The base was used in World War II and afterward for training crews in airborne drops and resupply missions. The first fighter unit was stationed at Pope in 1954.

In 1970 the base was modified to accept the heavy transport plane C-5A. Personnel and aircraft from the base have been involved in humanitarian disaster relief and White House-directed combat actions such as Operation Urgent Fury in Grenada (1983-85), Operation Just Cause in Panama (1989-90), Operation Desert Shield/Desert Storm in Kuwait and Iraq (1991), Operation Enduring Freedom in Afghanistan (2002), and Operation Iraqi Freedom (2003). Pope also has supported Fort Bragg's Airborne and Special Operations paratroopers. In the early 2000s the base was home to the Forty-third Airlift Wing of C-130 Hercules cargo airplanes; the 23rd Fighter Group, an Air Combat Command unit, flying A/OA-10 Thunderbolt II close air support aircraft; and the 18th Air Support Operations Group, which worked with U.S. Army units worldwide to coordinate air and ground operations.

"Soldiers of the U.S. Army's 82nd Airborne Division relax at Pope Air Force Base, N.C., prior to loading into aircraft for an airdrop on May 7, 2000." Image courtesy of the U.S. Department of Defense. Available from http://www.defense.gov/photos/newsphoto.aspx?newsphotoid=2857 (accessed September 11, 2012).