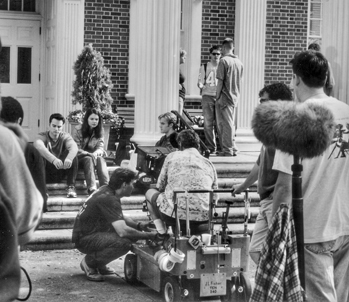 Studio movie production was popular throughout much of North Carolina, especially in the mountains, until the advent of "talkies" in the late 1920s necessitated the more controlled environment of sound stages. In the 1910s several production companies set up summer studios in and around Asheville and Hendersonville to take advantage of both the weather and the exquisite scenery. The eccentric Ned Finley starred in, produced, and directed several successful movies from these locations.

The first in-state studio run by a North Carolinian was probably North State Films, founded by W. S. Scales in Winston-Salem in the first quarter of the twentieth century. Scales, an important and barely documented filmmaker, was one of the few African American film producers of his time. He had been a successful theater owner in Winston-Salem, booking acts from the black vaudeville circuit as well as movies, and the black film industry was still in its infancy when he produced His Great Chance and The Devil's Match in 1923. At least two other black-owned production companies were formed in North Carolina in the 1920s, but whether they produced any films is not known.

In 1921 North Carolina pioneered the use of motion pictures as an educational tool. Mabel Evans, superintendent of Dare County schools, believed that the story of British efforts to colonize the New World should be told, especially to the state's schoolchildren. Evans received the enthusiastic support of the North Carolina Literary and Historical Association and the State Board of Education. Elizabeth Grimball, the director of the New York School of the Theatre, was selected to direct the picture, and Atlas Film Corporation of Chicago was engaged to do the filming. On 15 Nov. 1921 Governor Cameron Morrison and other state dignitaries gathered in the old Supreme Court Building for the premiere of the five-reel silent motion picture, The Lost Colony. This select audience was pleased with the film, and prints were made for general distribution.

John Warner, founder of Lord-Warner Pictures in Greenville, produced his one theatrical release, Pitch a Boogie Woogie, in 1947. Warner, a white man who had entertained local blacks at his Greenville theater with his own versions of "movies of local people" as early as the mid-1930s, was a self-taught filmmaker whose first film experience was freelancing for newsreel companies. He had dreamed of opening a Hollywood-style studio in Greenville, but a combination of factors proved his ruin. Warner also filmed Hurricane Helene (1958) for a local television station, where he worked after his film company folded.

The secretaries of the chambers of commerce of Raleigh, Goldsboro, Wilmington, Charlotte, Morganton, Greensboro, and Asheville met in Raleigh in 1934 and launched an effort to encourage filmmaking in the state. This idea was apparently first voiced by Louis T. Moore, the Wilmington chamber's secretary, prior to the Raleigh meeting. During the 1940s and 1950s, motion picture films and video copies of North Carolina: Variety Vacationland were used by the Division of Travel Information of the Department of Conservation and Development to promote the state, its people, and its resources. Feature films such as Ruby Gentry (1952), starring Jennifer Jones and Charlton Heston, were also filmed in part in North Carolina during this era.

In 1962, with a grant from the Smith Richardson Foundation, the North Carolina Film Board was created to produce films about the state and to encourage the production of commercial films in the state. The board was dissolved in June 1965 after producing 19 films, most of which were historical or educational in nature.

Governor James B. Hunt created the North Carolina Film Office (later the North Carolina Film Commission) by executive order in 1980, and within six years the state had become one of the top three filmmaking states in the nation. It is estimated that between 1980 and 1998, the film business added about $5 billion to the state's economy, more than half of which was spent in Wilmington. This amount reflects direct spending by the film industry, to which is added the income to service companies that support the industry-food catering, equipment companies, and generator and camera companies. Wilmington, sometimes called the "Hollywood of the East," has an estimated crew base of 1,000 professionals, including makeup, wardrobe, and casting personnel. Wilmington's position as the largest filmmaking center in North Carolina (although about three-fourths of the state's 100 counties have been the locale for feature films) has benefited in no small measure by the aggressiveness of the Wilmington Regional Film Commission. In 1998, for instance, the film business generated about $300 million in the state, with about $160 million in the Wilmington area alone.

Other filmmaking centers in the state include Asheville, Charlotte, High Point, Raleigh, and Shelby. Earl Owensby's E. O. Corporation in Shelby, a large independent motion picture complex, owned the state's first independent production studio when it opened in 1973 with the movie Challenge. Since then Owensby has produced, directed, or starred in some 40 feature films and television and cable network productions. The Full Frame Documentary Film Festival (previously the DoubleTake Documentary Film Festival) is an international event held annually in Durham. The four-day festival showcases important contemporary regional, national, and international documentaries and facilitates the exploration of their themes, ideas, and filmmaking techniques. The contribution of the North Carolina School of the Arts' school of filmmaking in Winston-Salem has also been substantial. The presence of this state-supported school means that young people seeking film industry work no longer need go to Hollywood or New York City to gain their credentials.

Billy Arthur, "How the Movies Started in North Carolina," The State (December 1963).