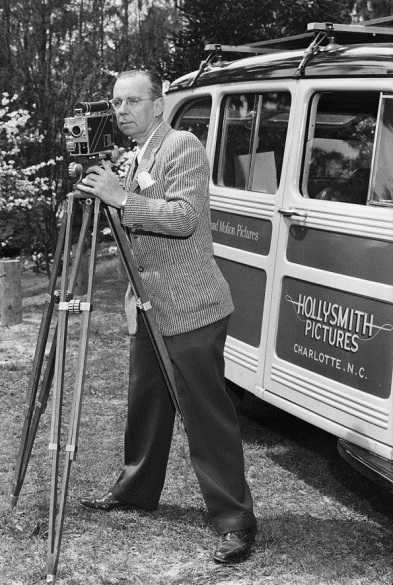 Town documentaries were films made for the entertainment or promotion of small North Carolina towns from about 1913 to the early 1950s. Hundreds of these films recorded events such as athletic contests and celebrations, were edited, and then were shown to the town's population at public screenings. The number of itinerant filmmakers who traveled the state is probably much greater than is presently known. (No official figures on filmmaking in North Carolina exist before the establishment of the state film office in 1980.)

Lexington native H. Lee Waters was perhaps the most prolific and talented of these filmmakers, shooting about 117 documentaries. His series, entitled Movies of Local People, was enormously popular and allowed him to make a good living during the Depression after his studio portrait business had slackened. Waters's films were artfully produced compared to the more static and predictable town documentaries produced by other filmmakers. Typically, they were very democratic, portraying people in all walks of life going about their daily business: leaving work, walking the streets, or simply relaxing on a Saturday afternoon. His visits to various towns sometimes coincided with important events like a fire or a festival, which he recorded as well. In many places, Waters's arrival was such an occasion that schools let out so that he could film the student body exiting the building, row after row, class after class. Waters's films were silent, but his screenings usually elicited running commentaries from the locals in attendance.

Less well known and much less documented are the films of Holly Smith, who made more than 100 town documentaries in the Carolinas while working out of Charlotte. (Smith ran a film and camera shop, and the films were intended to promote his business.) Don Parrisher, who made a similarly large number of films about the state (although only a handful are known to exist), worked in the same style as Smith. Both men usually created a 30-minute promotional film that featured a near-standard script with voice-over narration and starred the town's leading white business and civic leaders. These films, where they exist, remain particularly interesting for their depiction of tobacco auctions, manufacturing processes, new car lots, men's and women's fashions, food preparation, school yards, an occasional ball game, and dances and other recreational events.

Town documentaries never enjoyed a market beyond their specific audiences. Newsreels and features, on the other hand, displayed North Carolina scenes and stories to the world. Of the many newsreels made in the state, the best source for extant footage remains the Movietone collection at the University of South Carolina, which has more than 120 reels shot in North Carolina. These include an Asheville visit in 1925 by presidential hopeful Alfred E. Smith, Jack Dempsey's training sessions in Hendersonville in 1926, and the textile strikes of Gastonia, Belmont, and Kannapolis in 1934.

Most of the town documentaries and other early films made in North Carolina have been lost, although small samples are recovered almost every year. Duke University maintains a collection of Waters's town documentaries. The National Archives junked a large collection in the 1980s, including footage of tobacco festivals held in Wilson in the late 1930s and early 1940s. But the archives retained a large number of North Carolina-related documentaries, and several museums, local archives, and stock footage companies around the country have collected films that are of importance to North Carolina history. Fewer than ten of Smith's and Parrisher's films are known to exist in private collections.

Johnson, Martin L. "Seeing yourself as others see you in the films of H. Lee Waters." Master's thesis. University of North Carolina at Chapel Hill. 2005.