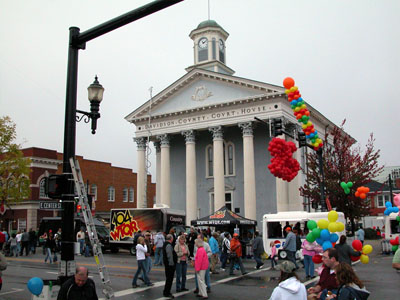 In 2007, the General Assembly designated the Lexington Barbecue Festival as the official Food Festival of the North Carolina Piedmont Triad (Session Laws, 2007, c. 533).

In 2005, fourth graders from Friedberg Elementary School in Lexington proposed the Lexington Barbecue Festival as the State Barbeque Festival. The bill was backed by Representatives Jerry Dockham and Hugh Holliman of Davidson County. When the bill was brought before the House of Representatives it sparked a fierce state-wide debate over the best barbecue style. Fans of the Western, Lexington style of barbecue were in favor of the bill, while fans of the Eastern style of barbecue thought the bill gave preference to one style over another. The heated discussions attracted international attention, with reporters from as far away as Russia weighing in on the matter. Eventually, the bill died in the House.

Dockham and Holliman reintroduced the bill in March of 2007, but in this revision, the recognition name was changed from ‘State Barbecue Festival’ to ‘State Food Festival.’ Eastern legislators begrudgingly voted for the change, and the bill passed in the house with a vote of 98 to 12.

Strong opposition continued in the Senate, however. According to Holliman, Senators from the Raleigh and Charlotte areas were still against the bill as it would slight their own planned barbecue festivals. The name was changed once again and limited to ‘Food Festival of the Triad’. Even so, there were still five senators that voted against the bill.

The bill was signed into law in August of 2007.

About the Lexington Barbecue Festival

The Lexington Barbecue Festival is held on one of the last weekends in October. In fact, both Davidson County and the City of Lexington have declared October ‘Barbecue Month.’

The festival began in 1984 as a collaboration between BB&T Bank and Davidson County’s newspaper The Dispatch. The first festival attracted 30,000 visitors who ate a total of 3,000 pounds of barbecue. The event now draws over 200,000 people.

During the festival itself, a ten block stretch main street is closed for activities and booths. Over 400 exhibitors sell food & crafts. There are seven different entertainment stages with continuous live music and performances. The event also provides a special kids section of rides and games. A 50-ton barbecue-themed sand sculpture stands proudly in the center of the festival.

Other festival events include an Antique Car Show, pig racing, a bicycle stunt show, a lumberjack sports show, a dog show, a festival blood drive, and a 5K Hawg Run.

The Lexington Barbecue Festival has won numerous local and national awards. Travel & Leisure Magazine named it in their list of “Top Ten Food Festivals in America.” USA Today called it one of the “Ten Great Places to Celebrate Food.” The Southeast Tourism Society designated it a “Top Twenty October Event.” Locally, the festival has also won more than 50 awards through the North Carolina Association of Festivals and Events.

AN ACT TO ADOPT THE LEXINGTON BARBECUE FESTIVAL AS THE OFFICIAL FOOD FESTIVAL OF THE NORTH CAROLINA PIEDMONT TRIAD.

Whereas, the first barbecue restaurant opened in the Town of Lexington in 1919; and

Whereas, Lexington has become well known for its barbecue and has been referred to as the Barbecue Capital of the World; and

Whereas, since 1984, Lexington has held an annual Barbecue Festival; and

Whereas, the Lexington Barbecue Festival has become one of the most popular food festivals in the country; and

Whereas, at the Lexington Barbecue Festival more than 150,000 visitors enjoy delicious food as well as a number of rides, games, and regional music; and

Whereas, during the Lexington Barbecue Festival, civic and nonprofit organizations sponsor events and sell goods to raise funds and present educational information to the public, and a number of local artists showcase and sell their crafts; and

Whereas, the Lexington Barbecue Festival was named "One of the Top Ten Food Festivals in the Country" by Travel and Leisure Magazine and a "Top 20 Event for the Month of October 2002" by the Southeast Tourism Society; and

Whereas, the Piedmont Triad Region of the State of North Carolina does not have an official food festival; Now, therefore,

The Lexington Barbecue Festival is adopted as the official food festival of the Piedmont Triad Region of the State of North Carolina."

In the General Assembly read three times and ratified this the 2nd day of August, 2007.