The appointment of state dance has been in contention in the North Carolina legislature since 1987, when Rep. David Redwine of Brunswick county submitted a bill to name Shagging the state dance, even going so far as to demonstrate the three-step to his legislative subcommittee. The movement failed, largely due to opposition from other dance factions. Three-dance bills (Shagging as state beach dance, Clogging as state folk dance, and Square Dance as American folk dance) were introduced in 1993, 1995, and 1997 but at the time it was reported that the lawmakers wanted to spend their time on ‘weightier matters.’ A separate bill was also introduced in 1997 to make Square dancing the official state dance, and supporters hoped to have it passed in time for Charlotte to host the 47th annual National Square Dance Convention in 1998. Once again, the bill failed.

The issue again appeared in 2005, when Senator Walter Dalton of Rutherfordton urged the North Carolina senate to reclaim its heritage by adopting the shag as the state dance in retaliation of South Carolina doing similarly in 1984. Dalton accused South Carolina of making millions of dollars by stealing North Carolina’s historical dance and openly declared ‘war’ on South Carolina’s legislature. The bill, which also included clogging as the state folk dance, was passed 47 to 1 in the Senate and 101 to 7 in the House of Representatives.

The Shag is of much more recent origin, being a type of swing dance that developed in the 1930's and 40's. Shagging, combining nimble footwork with upbeat rhythm and blues (known as Beach music) originated at open air beach parties on the North and South Carolina coasts, and is also the official dance for the State of South Carolina. For more information, see Shag Dancing. 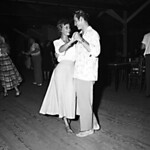 Whereas, clogging and shagging are popular dances that have entertained both participants and spectators in this State for decades; and

Whereas, the shag is a form of swing dancing that evolved from the jitterbug and jump blues of the big band jazz era and originated at Carolina Beach during the 1940s; and

Whereas, the shag is most often associated with beach music, which refers to songs that are rhythm and blues based and, according to Bo Bryan, a noted shag historian and resident of Beaufort County, is a term that was coined at Carolina Beach; and

Whereas, rhythm and blues groups, such as Jimmy Cavallo and the Houserockers, bolstered the popularity of the shag during the 1940s when they performed in Fayetteville, White Lake, and other areas around the State; and

Whereas, today, the shag is a recognized dance in national and international dance competitions held across the United States; and

Whereas, North Carolina is home to some of the most successful national shag champions, including multiple championship title winners, including Charlie Womble, Jackie McGee, Michael Norris, LeAnn Best, and Sam and Sarah West; and

Whereas, North Carolina natives Clarice Reavis of Fayetteville and Harry Driver of Dunn are recognized as Queen of Shag and Father of Shag respectively; and

Whereas, numerous North Carolinians have been inducted into the Shaggers Hall of Fame; and

Whereas, North Carolina has the most beach music clubs in the nation and has a number of radio stations that depend solely upon the listenership of shag enthusiasts; and

Whereas, it is fitting to adopt clogging and shagging as official State dances; Now, therefore,

(a)       Clogging is adopted as the official folk dance of North Carolina.

(b)       Shagging is adopted as the official popular dance of North Carolina."

In the General Assembly read three times and ratified this the 13th day of July, 2005.

Oh found it and I LOVED the

Who are these people?!!?

Who are these people?!!?

I love the video.

I love the video.

i hate the vidoe

i hate the vidoe

i did NOT get to see the

do you need a link or

do you need a link or something? I cant seem to find it either!