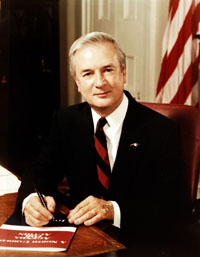 The first North Carolina governor elected to consecutive four-year terms and the state’s longest serving chief executive with sixteen years in office, James B. Hunt, Jr. (1937- ) assumed the moderately progressive mantle of his Democratic predecessors by placing emphasis on education, economic development, and highways. In his third and fourth terms, Hunt, by then jokingly called by some “governor for life,” championed child care and, acceding to perceived wishes of the voters, recast himself as a conservative with an increased emphasis on cutting taxes and reducing crime.

Jim Hunt was born on May 16, 1937, in Greensboro to soil conservationist James Baxter Hunt and the former Elsie Brame, a schoolteacher. When he was still of preschool age, the family moved to a farm at Rock Ridge outside Wilson. Raised in the Free Will Baptist Church, Hunt joined the Presbyterian Church as an adult. In 1959 and 1962 he earned degrees from North Carolina State College, completing a master’s thesis which dealt with the economics of tobacco production. In 1964 Hunt earned a law degree at the University of North Carolina. He and his wife, the former Carolyn Leonard whom he married in 1958, then moved to Nepal where for two years he worked as an economic adviser to the government under a Ford Foundation grant. Jim and Carolyn Hunt are the parents of four.

Observers of politics routinely comment on Hunt’s ambition and desire to win, reflected in his early political drive. Eleven-year-old Hunt helped his family campaign for Kerr Scott. At N.C. State he took part in the Terry Sanford campaign and while in law school he worked for Richardson Preyer. On passing the bar Hunt joined a law firm in Wilson. In 1968 he served as president of the state’s Young Democrats. In 1970 Governor Robert W. Scott appointed him to chair a commission to revise the state party’s rules. In 1972, a year when Republicans took the presidency, the governorship, and a U.S. Senate seat, Hunt was elected lieutenant governor. In that office he helped guide expansion of the kindergarten program through the legislature. In 1976 Hunt defeated businessmen Edward O’Herron and Thomas Strickland and legislator George Wood in the Democratic gubernatorial primary without a runoff. He gained 65% of the vote against Republican David Flaherty in the general election. 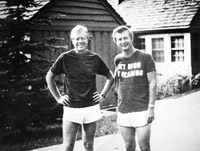 In a brief, 450-word inaugural address in 1977, Hunt called for a “new beginning” and citizen involvement in government. The governor established a Primary Reading Program as part of his education reforms that included teacher pay raises and competency testing for teachers and students. The N.C. School of Science of Mathematics, a residential high school for gifted students and a Hunt innovation, opened in 1980. The governor launched efforts to recruit high technology businesses and established the Microelectronics Center in 1980. Hunt declined to stay executions in capital punishment cases and in 1978 reduced the prison sentences of the “Wilmington Ten,” convicted of a firebombing related to racial unrest in the Port City.

In 1977 voters approved an amendment to the state constitution permitting the governor to serve two consecutive four-year terms. In 1980 Hunt ran for reelection and withstood a primary challenge from former Governor Robert W. Scott. In the fall he defeated Republican nominee I. Beverly Lake, Jr., son of 1960 and 1964 contender I. Beverly Lake, Sr. In 1981 Hunt created North Carolina 2000, a commission chaired by former UNC President William C. Friday, to study future needs of the state. With Hunt’s backing the legislature, after a divisive debate, in 1983 approved a three-cent gasoline tax increase with the funds earmarked for highway improvements. Economic development remained central to Hunt’s agenda in his second term. In 1984 Hunt oversaw the 400th anniversary commemoration of the Roanoke voyages. The state zoo expanded and the film office oversaw increased production.

In 1984 Governor Hunt challenged Senator Jesse Helms for the U.S. Senate seat held by Helms since 1972. The contenders spent over $26 million on the race, mostly on television advertising, making it the costliest Senate campaign in the nation to that date. The two met in a notable series of televised debates. In the end Helms triumphed by a 52% - 48% margin. Editors of the Almanac of American Politics reasoned that the state’s voters “preferred Helms’s principled advocacy over Hunt’s pragmatic problem-solving.” Out of office for the first time in twelve years Hunt returned to the practice of law and spent more time on his Wilson County farm. As governor Hunt had established a national reputation as an education reformer and as a private citizen he remained active in that movement.

In 1992 Hunt defeated Attorney General Lacy Thornburg in the Democratic primary and Republican Lieutenant Governor James C. Gardner in the general election to regain the governor’s office. In his third inaugural address Hunt stressed childhood development and touted a program tagged “Smart Start,” whereby counties create and implement plans to improve child care. Early in his term he called a special session of the legislature devoted to crime. The Republican gains in the 1994 legislative elections, giving the GOP a majority in the state House, led Hunt to seek common ground with the new lawmakers.

In 1996 Hunt defeated Congressman Robin Hayes in his bid to retain his seat. A constitutional amendment approved that same year made him the first North Carolina governor with veto power, an authority he did not exercise in his final four years. In his fourth term Hunt pushed to raise teacher pay to the national average and to increase student test scores. Unprecedented damage caused by Hurricane Fran in 1996 and Hurricane Floyd in 1999 tested Hunt’s leadership skills. After a generation in the public eye, he left office in 2001 as one of the most familiar and durable actors ever on the stage of North Carolina politics.

Barone, Michael, and Grant Ujifusa. 1993. The almanac of American Politics, 1994: the senators, the representatives, and the govenors : their records and election results, their states and districts. Washington, D.C.: National Journal.