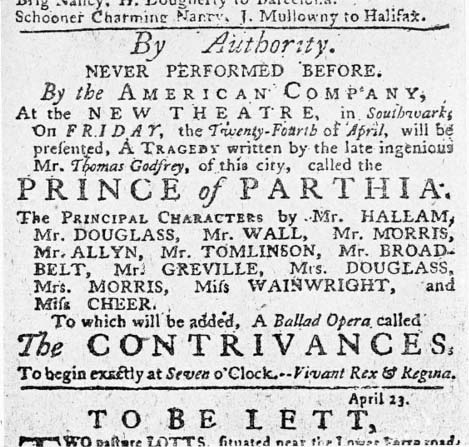 The first drama written by an American and produced by a professional company was completed in Wilmington sometime in late 1759. Playwright Thomas Godfrey died before his play, The Prince of Parthia, was published in 1765 and produced in Philadelphia in 1767. The next known production to come from the pen of a North Carolinian was former governor Alexander Martin's A New Scene Interesting to the Citizens of the United States. This short play, written in 1798 in an effort to engender patriotism, was presented in Philadelphia. The first play that could be considered entirely a product of North Caroli

na was Lemuel Sawyer's Blackbeard: A Comedy, in Four Acts;. Founded on Fact, written and published in 1824. Sawyer, a native of Camden County, wrote the play using characters, settings, and situations based in North Carolina.

In the eighteenth and nineteenth centuries, North Carolinians were entertained by both professional and amateur thespians. Professional touring companies performed standard popular British plays and occasionally inspired North Carolinians to form amateur companies. The state's first firmly established community-based amateur company was the Thalian Association in Wilmington. Organized in 1788 and interrupted by occasional lapses, the association's activities have ranged from producing plays to managing Thalian Hall, which opened in the 1850s to serve as a town hall, library, theater, and home to the association. The tradition in North Carolina of operating a theater in a multipurpose building goes back to the 1700s and early 1800s, with Masonic temples, school buildings, and even the State Capitol hosting theatrical performances.

At the turn of the twentieth century, Christian Reid wrote a play about the Civil War era for production by the United Daughters of the Confederacy. But her Under the Southern Cross (1900) was an isolated effort, as was Esther Wake; or, The Spirit of the Regulators (1913), a historical play about revolutionary North Carolina by Adolph Vermont of Smithfield. In 1905 Cleveland County lawyer, politician, minister, lecturer, and writer Thomas Dixon Jr. published his play The Clansman, a revision of an earlier novel. In 1913 the successful play caught the attention of D. W. Griffith, then an aspiring filmmaker, who convinced Dixon to allow him to create a motion picture adaptation. The movie, The Birth of a Nation (1915), is considered a landmark motion picture in terms of technical and artistic achievement. However, its white supremacist theme and racist depiction of African Americans sparked criticism at its debut and remains highly controversial. 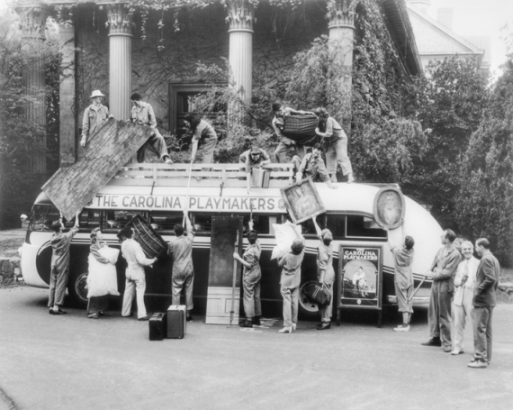 Frederick H. Koch, one of the greatest influences on drama and theater in North Carolina, arrived at the University of North Carolina in Chapel Hill in 1918 to teach a new course in writing plays in the English Department. Seventeen-year-old Thomas Wolfe was a member of Koch's first class in Chapel Hill, and Paul Green followed in 1919. Koch encouraged his students to write "folk" plays about the common people, their lives, and their legends. To give his students an outlet for their work, in 1919 he organized the Carolina Playmakers, whose tours brought the folk play productions to the far reaches of North Carolina and beyond. The enthusiasm for amateur theatrics encouraged Koch, with the help of the university's Extension Division, to open the Bureau of Community Drama. The bureau encouraged and advised in the writing and production of original plays in North Carolina communities. Koch taught at the university and remained active in North Carolina theater for 26 years until his death in 1944. While fledgling playwrights worked under Koch, a number of other North Carolina writers worked independently. What Price Glory? (1924), coauthored by Lawrence Stallings of Yanceyville, who had served in World War I, rendered a faithful image of the war. Lula Vollmer of Addor, after visiting the lumber camps in the mountains, wrote several plays with a North Carolina setting. Her most famous play, Sun-Up (1924), was about a rugged mountain woman who fought the "guv'ment" and did not want her son to go off to World War I.

Paul Green won the Pulitzer Prize for his play, In Abraham's Bosom, in 1927. Born near Lillington, Green grew up on his father's farm and became a schoolteacher to save money to attend the University of North Carolina. Green's student days were interrupted when he served in World War I, but after the war he returned to the writing of plays. Among his most famous plays are Tread the Green Grass (1931), Roll Sweet Chariot (1931), Shroud My Body Down (1935), and Johnny Johnson (1937). Green was also the author of several outdoors dramas, including the first and most famous, The Lost Colony (1937).

Counted among the various plays by Howard Richardson of Black Mountain is his poetic fantasy-drama Dark of the Moon, which sustained a long New York run after its premiere in 1945 and has been frequently revived by amateur and professional groups. Richardson, another Koch disciple, based Dark of the Moon on the Scottish ballad, "Barbara Allen." The play relates the love of John the witch-boy for bonny Barbara Allen of Buck Creek.

Playwright Romulus Linney, descendant of a prestigious family from the mountain counties of Alexander, Wilkes, and Watauga, spent his youth in Boone. After writing a number of full-length plays set variously in Germany, Hawaii, and Washington, D.C., Linney delved into the North Carolina mountains and hills for his Holy Ghosts (1974). Appalachia Sounding (1975), Linney's play for the bicentennial celebration, details a mountain family's experiences through 200 years of enduring vitality. Old Man Joseph and His Family (1979) is a biblical play dramatizing the boyhood of Jesus.

Pender County's Samm-Art Williams grew up near Burgaw. After graduating from Morgan State University in Baltimore, Williams went to New York to attempt a career in drama. By 1974 he had become a member of the Negro Ensemble Company as dramatist, director, and actor. One of his first plays, Welcome to Black River (1975), described North Carolina sharecroppers in 1958. However, it was Home (1979) that brought him national recognition. Over the course of his career, Williams has penned many dramas about the black experience in North Carolina.