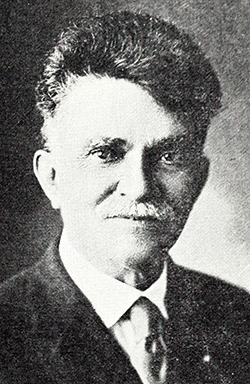 Marcus Cicero Stephens Noble, educator and author, was born at Louisburg, the son of Albert Morris and Mary Ann Primrose Noble. He was ten years old when the Civil War ended, and as a result of the confusion of the times, the family changed its residence several times. The elder Noble was a captain in the First North Carolina Regiment. Reportedly, when Federal forces struck New Bern, the Nobles moved to Louisburg, later went as refugees to Clayton, and finally located in Selma, where they were founding settlers of the town. In later years, Noble liked to tell a story from his youth. When Union General William T. Sherman was on his march from the east to Raleigh and Durham, he stopped briefly in Clayton, and one of his officers was at the Noble home. Sherman came to see the officer and there took ten-year-old "Billy" (as Noble was called) on his knee. They exchanged friendly banter, in which the lad expressed himself fearlessly to the great enemy general.

Noble had limited preparatory schooling in Selma and then was graduated from the Bingham School at Mebane. In 1875 he entered Davidson College, where he received a good grounding in the classics for a year before transferring to The University of North Carolina for two more years of study (1877–79). His graduation thesis, "The Imperative Mood," written under the direction of Dr. George T. Winston, was entirely in Latin. Many years later, Davidson College awarded him an honorary doctor of laws degree.

Immediately after leaving Chapel Hill, Noble returned to the Bingham School as commandant of cadets and instructor for three years. From 1882 to 1898 he was superintendent of schools of the city of Wilmington. His administration of the Wilmington schools was distinctive and expansive. Winning the support of local citizens, he projected many innovative ideas for public school development; among them was the erection of the first separate high school building in the city. With frequency he was heard around the state.

Noble's logical presentations of progressive educational principles and practices attracted such wide attention that in 1898 he was invited to return to The University of North Carolina as professor of pedagogy. In 1913 he was named dean of the School of Education, an administrative post he held for nine years. He also was director (then called superintendent) of the university's summer school under President Edwin A. Alderman and subsequent administrations.

During those years between 1898 and 1913, Noble teamed with North Carolina's great educators—Edwin A. Alderman, Charles Duncan McIver, Edward Moses, P. P. Claxton, J. Y. Joyner, Alexander Graham, and others—to lay a foundation for the masterful emphasis in education that had evolved from the leadership of Charles Brantley Aycock and others of his day. One of the projects on which Noble worked very hard was the holding of teachers' institutes in all parts of the state. One reporter wrote: "These institutes lasted a week, and on the last day or two the people would gather from the whole countryside round-about and these meetings would resolve themselves into a sort of educational revival." The impact of the leadership of those "youthful crusaders" for better education completely refocused public education in North Carolina and produced the impetus for growth and excellence in the decades that followed.

In 1921 Noble asked to be relieved of his administrative duties in the School of Education, and for the next thirteen years he devoted his time to teaching and writing. In 1931, for his comprehensive study, A History of the Public Schools of North Carolina, he won the Mayflower Cup, an award for the best book written by a North Carolinian in that year. He diligently worked on the second volume in the years immediately prior to his death. In addition, he was the editor of three textbooks: Williams' Reader for Beginners (1893), Davies' Standard Arithmetic (1886), and the North Carolina supplements to Matthew F. Maury's Manual of Geography (1895). Noble also was the author of The Battle of Moore's Creek Bridge (1904) and The Teaching of County Geography (1915). His textbooks were widely used in high schools and colleges of the state. His numerous articles, particularly on North Carolina history, appeared in state and national journals and periodicals. 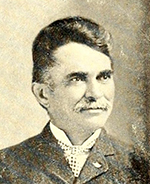 A portrait of Noble was presented to The University of North Carolina in 1941. On that occasion, Clyde A. Erwin paid tribute to the veteran educator and spoke of the twenty years before the turn of the century when he was a pioneer in the cause of public education.

Two "monuments" to Noble were established at the Chapel Hill campus. One was the Emerson athletic field, provided through a substantial gift of Isaac E. Emerson, who told the trustees that he was making the gift largely because of his personal friendship for Noble. The other was the Extension Division, conceived by Noble to take educational opportunities and facilities to the people of the state, thereby serving its whole educational program in countless ways. Noble had heard that such a program was offered by the University of Wisconsin, and he went there at his own expense to study the plan and procedures involved. His recommendations to President Edward Kidder Graham won hearty approval, and the Extension Division became an operating adjunct of increasing value "as a means of drawing the University and the People of the State closer together."

Noble was a longtime leader of the State Teachers' Association (later known as the North Carolina Education Association), serving as president for one term (1913–14) and remaining its mentor through the years. He was also active in the work of the North Carolina Historical Commission and was its chairman for several years. Noble was a trustee (1899–1940) and president of the board (1907–40) of the Agricultural and Technical College of North Carolina at Greensboro, a member of the first board of trustees of the institution that became the University of North Carolina at Greensboro, and a member of the State Board of Education Examiners (1897–1904).

Although he retired from teaching in 1934, he continued to speak out in support of improved education and both publicly and privately advocated that lawmakers and citizens generally authorize increased taxes for this purpose. For thirty-three years he was a director of the Bank of Chapel Hill, and almost until the day of his death he spent a portion of each day at his office there.

Noble was described as an unabashed optimist, a great teacher, human and friendly, and one who always welcomed an opportunity to serve. A popular commencement speaker, he "rode the circuit" until his early eighties. He had an uncanny ability to remember names and made a hobby of keeping in touch with his former students.

On 26 Aug. 1885 he married Alice J. Yarborough of Wilmington, and they became the parents of two children: Alice, a staff member and editor at The University of North Carolina School of Pharmacy, and M. C. S., Jr., onetime executive assistant director of the North Carolina Department of Revenue. Noble died at his home in Chapel Hill and was buried in the family plot in Wilmington.