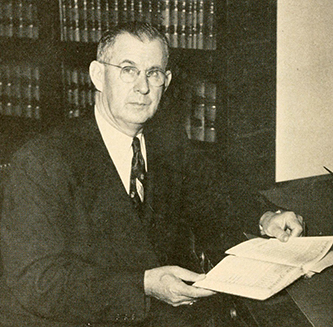 Clyde Atkinson Erwin, educator, was born in Atlanta, Ga., the son of Sylvanus and Mamie Putnam Erwin. He attended school in Charlotte and Waco, N.C., and was a student at The University of North Carolina in 1915–16 and subsequent summer schools. He held honorary doctorates from Catawba College and North Carolina State College. After a brief period as a classroom teacher, he became principal of various schools in the western Piedmont section of the state and from 1925 to 1934 was superintendent of the Rutherford County schools. He gained statewide prominence as president of the North Carolina Education Association when he campaigned for a state-supported school system and adequate support in the 1933 General Assembly.

In 1934 Erwin was appointed by Governor J. C. B. Ehringhaus to succeed the late Arch T. Allen as state superintendent of public instruction. Erwin was one of the youngest men to hold a major state office. He served eighteen years in the position, winning reelection easily each time he was a candidate. While head of the state's school system, he took the lead in raising the minimum school term from eight to nine months, adding a twelfth grade to the high schools, and reducing the teacher load; expenditures grew from $19 million in 1934–35 to $103 million at the time of his death.

Erwin was a member of and officer in numerous regional and national educational organizations and served on advisory committees and as consultant to state and national officials. The day before his death he returned home from Chicago where he served as a consultant on the education plank in the Democratic party's 1952 platform. He also served on the boards of trustees for East Carolina Teachers College, the Greater University of North Carolina, North Carolina College at Durham, Agricultural and Technical College at Greensboro, and Elizabeth City State Teachers College. Erwin was active in Boy Scout work and was especially vigorous in encouraging cooperation between scouting and public schools. In 1950 he was state chairman of the National Conference of Christians and Jews, and in the same year he was chairman of the U.S. delegation to the International Conference on Public Education in Geneva, Switzerland. An active member of the Methodist church, he had a lengthy record as an adult Sunday school teacher in Rutherfordton and in Raleigh.

Erwin married Evelyn Miller of Waco, and they were the parents of two children: Frances Elizabeth (Mrs. George Withers) and Clyde A., Jr. He was buried at Capernium near Waco.

North Carolina Manual (1951), for a list of his many offices and professional positions.