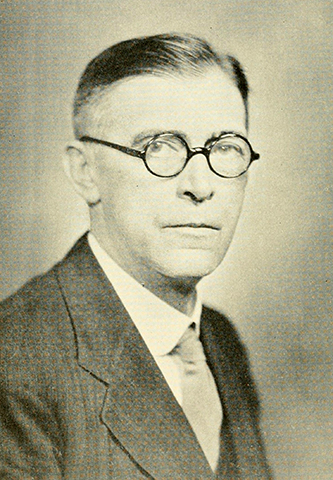 Arch Turner Allen, educator, writer, and North Carolina state superintendent of public instruction at the beginning of the Great Depression, was born in Hiddenite, the sixth of seven children of George James Allen (1824–1911) and Mary Elizabeth Campbell Allen (1838–1911). His grandfather, Robert Allen, had been a prosperous farmer, a prominent community leader, and one of the founding settlers of Alexander County in the midnineteenth century.

Allen began his career in 1897 as Statesville school principal and eighth-grade teacher under the guidance of Superintendent D. Matt Thompson. From 1904 to 1905 he was principal in Washington, and from 1905 to 1907 he was principal of Dilworth School in Charlotte. In 1907 he became superintendent of Graham schools; three years later he assumed the superintendency of the Salisbury public schools, where he remained until 1917. Allen served in the state department of education from 1917 to 1923, during the administrations of Superintendents James Yadkin Joyner and Eugene Clyde Brooks. From 1917 to 1921 he was a member of the State Board of Examiners and Institute Conductors, and from 1921 to 1923 he was director of teacher training. In 1923 Allen was elected to the presidency of Cullowhee State Normal School, but before he could assume the position, he was appointed to fill Brooks's unexpired term.

Allen took office as state superintendent of public instruction in June 1923 and directed the state's school policy until his death. Major issues of his administration included consolidation, teacher certification, curriculum revision, longer school terms, high schools, school finance, public opinion, and state educational responsibility. Initially, Allen's primary goal was to raise the quality of the rural elementary schools. He sought to create a system that would offer "equal educational advantages to all children—rich and poor alike—rural and city." Convinced that consolidation was the best means of equalizing opportunities, Allen advocated a county plan of taxation, organization, and administration that would decrease the number of school districts, provide school transportation, make rural buildings larger and more adequate, and establish a universal eight-month term in rural as well as urban areas. Not until the economy drive of the depression added the needed incentive were these goals achieved.

Economic conditions took a serious turn in 1930, and the schools began to come under attack as a waste of money. Many counties were unable to collect local school taxes, and there were demands that schools be limited to seven grades or closed entirely. Then the old doctrine that primary responsibility lay with the county was replaced with a new philosophy in school maintenance and support: education was a state function and the state must support it. In 1933 the legislature decided on complete support. It set up a state-wide and state-supported eight-month term, greatly reduced the number of school districts, provided for state-operated transportation, and based support on income and sales taxes rather than on property taxes. Although Allen termed the state appropriation "very skimpy," he was convinced that the legislature had provided a firm foundation on which to build a good system of schools when conditions improved.

Allen saw the key issue of his day as broader and far more basic than finance. The attack on schools was more than just a drive against taxes; it was a questioning of the value of public education. Schools could recover from economic loss, but not, Allen warned, from the loss of public good will. He advised the formulation of a new philosophy that would be in spirit with the times and would appeal to the common man. He envisioned a democratic school system based upon universal opportunity and dedicated to equality and to the preservation of individual rights. The modern school, said Allen, should rest upon "the philosophy of individual freedom and the concomitant of individual responsibility." The school should not indoctrinate or manufacture people; it should help children develop personalities of their own and promote the ability for analysis, self-direction, and cooperation.

In addition to his professional activities, Allen was involved throughout his lifetime in community affairs. He was a member of the Methodist church, the Kiwanis Club, the Junior Order of United American Mechanics, the Watauga Club, the Raleigh History Club, and the Democratic party.

Allen was married to Claribell McDowell of Charlotte, daughter of John McDowell and an alumna of Queens College. They were married on 19 June 1909 amd were the parents of Arch Turner, Jr. (b. 13 Sept. 1910), and Elizabeth McDowell (b. 26 Sept. 1914).

As a spokesman for education in North Carolina, Allen wrote numerous newspaper articles and presented a series of school talks on radio station WPTF. He wrote articles for such magazines as the High School Journal, School Life, and the Journal of the National Educational Association ; and he presented speeches before the North Carolina Teachers' Assembly and the Southern Conference on Education. He published studies for the department of education and contributed an informative chapter, "A State System of Schools in North Carolina," to State Centralization in North Carolina, edited by Paul Betters and published by the Brookings Institution in 1932.

Biennial Reports, of the State Superintendent of Public Instruction, 1922–34.